It's been over a year since I last looked at Wal-Mart (WMT) and I like what I see.  I actually missed picking up some shares yesterday by $0.01.  The joys of setting limit orders.  I wanted to revisit this dividend champion discount retailer.  Wal-mart closed trading on Wednesday, June 12th at $74.84.

Analysts expect Wal-mart to grow earnings 9.29% per year for the next five years and I've assumed they can continue to grow at 3.50% per year thereafter. Running these numbers through a two stage DCF analysis with a 10% discount rate yields a fair value price of $102.91. This means the shares are trading at a 27.3% discount to the DCF.

Wal-mart's average high dividend yield for the past 5 years is 2.65% and for the past 10 years is 2.13%.  This gives target prices of $70.99 and $88.30 respectively based on the current annual dividend of $1.88.  I think the 5 year average is more representative going forward and it will probably creep up higher as well.  Wal-mart is currently trading at a 5.4% premium to the average high dividend yield valuation. 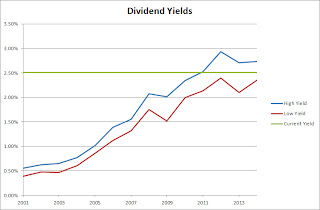 For the DDM, I assumed that Wal-mart will be able to grow dividends for the next 5 years at the minimum of 15% or the lowest of the 1, 3, 5 or 10 year growth rates. In this case that would be 14.63%.  After that I assumed they can continue to raise dividends for 3 years at 75% of 15% or 10.97% and in perpetuity at 3.50%.  The dividend growth rates are based off fiscal year payouts and don't necessarily correspond to quarter over quarter increases.  To calculate the value I used a discount rate of 10%.  Based on the DDM, Wal-mart is worth $52.55, meaning it's overvalued by 42.4%.

Wal-mart's gross margins for FY 2012 and FY 2013 were 26.8% and 26.7% respectively. They have averaged a 25.6% gross profit margin since 2004 with a low of 24.0% in FY 2004.  Their net income margin for the same years were 3.7% and 3.8%.  Since 2004 their net income margin has averaged 3.6% with a low of 3.3% in FY 2009.  I typically like to see gross margins greater than 60% and at least higher than 40% with net income margins being 10% and at least 7%.  Wal-mart is under both of my typical margin ranges; however, each industry is different and allows for different margins, retail is a notoriously low margin business.  How is WMT doing compared to it's industry?  For FY 2013, Wal-mart captured 95.4% of the gross margin for the industry and 115.2% of the net income margin.  Being the world's largest retailer allows them to turn more of their sales into profits thanks to their efficient and large distribution network.

Wal-mart's shares outstanding have been decreasing the last 10 years.  Since FY 2004, they've purchased 23.8% of their shares outstanding for an average annualized decrease of 2.7%.  Looking at the amount spent on share buybacks, management increased the buyback program in FY 2010 and have kept it elevated since.  Buybacks are great as long as they are purchasing shares at a value price point, otherwise they are reducing shareholder value through the buyback program.  Looking at the historical data, the increased buyback program coincides with better value prices available in the market.  By repurchasing shares, Wal-mart is able to increase EPS and management can return cash to shareholders this way by increasing the ownership stake of the company for all the outstanding shares. 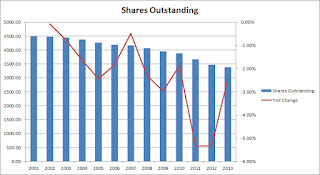 Wal-mart is a dividend champion with 39 consecutive years of dividend increases.  They have increased the dividend at a 18.24%, 15.82%, 14.63%, and 17.97% rate for the last 1,3,5, and 10 year periods.  Nothing wrong with those levels as they will quickly juice the lower starting yield.  The most recent increase was over 18%.  Their payout ratio based off EPS has increased since FY 2004 which has allowed the dividend to increase faster than EPS have grown.  I expect it to track closer to EPS growth going forward.  Since FY 2004 the payout ratio has increased from 17.4% to 31.7% and has averaged 26.3% over that time. 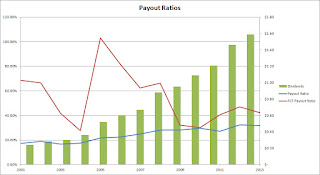 Wal-mart's free cash flow has been great since FY 2003 growing at a 14.9% annualized rate.  Their free cash flow payout ratio has averaged only 53.3% since FY 2004, which is higher than the payout based on earnings.  Annual total shareholder return when accounting for buybacks plus dividends has averaged 146.5% of FCF since FY 2004 so it will have to come down or management will have to continue taking on debt to finance either the dividend, buybacks or capex. 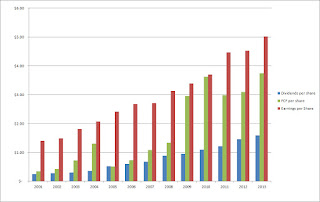 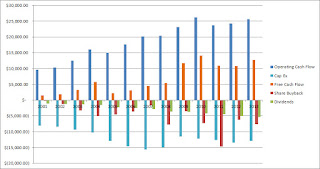 Wal-mart's ROE has averaged 21.3% since 2004 and has been in a general uptrend ending FY 2013 at a 23.3% level.  Their ROCI has averaged a 13.8% rate since 2004 and like their ROE has been increasing, ending FY 2013 at 15.1%.  I don't necessarily look for any absolute values, rather I like to see stable to increasing levels over the long term because it shows the consistency that management is able to invest in growing the business. 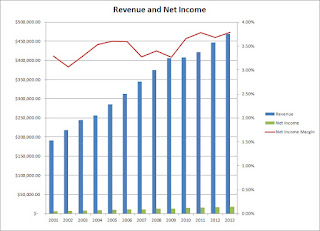 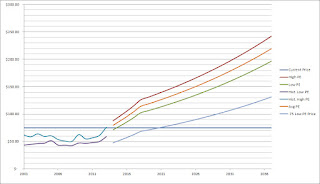 The chart shows the historical high and low prices since 2001 and the forecast based on the average PE ratios and the expected EPS values. I have also included a forecast based off a PE ratio that is only 75% of the average low PE ratio.  I like to the look to buy at the 75% Low PE price or lower to provide for a large margin of safety, although this price doesn't usually come around very often. In the case of Wal-mart, the target low PE is 13.46 and the 0.75 * PE is 10.09.  This corresponds to an entry price of $79.61 based off the expected earnings for FY 2014 of $5.30, with a 75% target price of $47.63.  Currently Wal-mart is trading at a $27.21 premium to the 75% low PE target price and a $4.77 discount to the average PE price.  If you believe the analyst estimates are pretty close, then Wal-mart is trading on the lower end of it's typical range but it's not at bargain basement levels.

The average of all the valuation models gives a target entry price of $69.33 which means that Wal-mart is currently trading at a 8.0% premium to the target entry price. I've also calculated it with the highest and lowest valuation methods thrown out.   In this case, the DCF and Graham Number valuations are removed and the new average is $65.93.  Wal-mart is trading at a 13.5% premium to this price as well.

I have a very small position in Wal-mart in my Roth IRA and I'm interested in starting a position in my taxable account.  I feel that the continued growth of Wal-mart as a business will still be at a high level as they expand into the emerging market economies which will be a big driver of growth.  Management has already shown a commitment to raising the dividend year in and year out so the dividend growth should follow.  I actually almost started the position yesterday but my limit order missed by exactly $0.01.  I wasn't going heavy with this position and still don't plan to based on the current price levels.  If there's a dip down to the low $70's or even below $70 then I'll try and scoop up as much as I reasonably can.

What do you think about Wal-mart as a DG investment at today's prices?  How do you think the long-term dividend growth prospects are?
Email Post
Labels: stock analysis