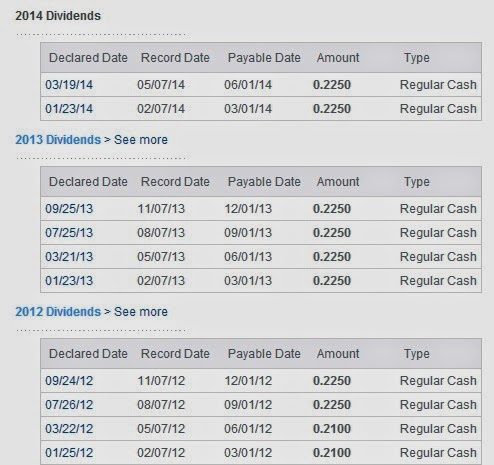 Yep, Intel announced yet another quarterly dividend payment of $0.225 per share.  That would be 8 straight payments of $0.225.  For a position that had the promise of being a solid dividend growth investment, I’m very disappointed in this.  I’ve been rather disappointed that Intel couldn’t even give a token increase of $0.01 at least once since the September 2012 payout.  As a dividend growth investor that’s trying to reach financial independence through dividends, a dividends safety is priority 1A and its growth is priority 1B.  Towards the end of 2013 I wasn’t completely fed up but I was getting there and wouldn’t have minded closing out my position.  So I let Mr. Market make the decision for me and decided to sell call options on Intel until the shares were called away from me.  I mentioned in my March dividend update post yesterday about a call option for Intel executing so let's go over the details.

Intel’s struggles have been well documented and their being way late to the mobile game should have been a warning to proceed with caution.  I was still very early in my investing “career” and thought that the issues facing Intel’s expansion into mobile devices were largely over blown.  Heck, they’re the best chip marker in the world and have huge amounts of cash to throw at $&D.  However, I have concerns about whether the mobile chips can even replace the further attrition of PC sales which offer higher price points and higher margins for Intel.  So even if Intel does make serious inroads with respect to mobile devices, it might no be enough to make up for further declines in PC sales.

The biggest reason that management has given for not increasing the dividend is because they are targeting a lower cash flow payout ratio than they currently have.  With declines in revenue, EPS, and net income in 2013 compared to 2012 and a negative margin trend, I’m not sure how quickly they’ll be able to see growth in the underlying cash flow to allow for dividend growth.

On March 19th, I sold a $25 strike call option for $0.26.  After commission and fees I received $18 in option premium to do with as I pleased.  As mentioned above the share price closed above $25 this past Firday which triggered the execution of the call option and subsequent sale of 100 shares.  This left me with 7.297 share still under my control, so I decided to sell this this past Monday, March 31st.  I sold the remaining shares for $25.9501 and received a total of $181.41 for my troubles.

All in all Intel turned into a decent holding but definitely not a great investment.  I earned a 7.68% annualized return from my holding in Intel which isn't bad considering the dividend never grew.  I'm just glad that I learned a lesson without paying a price for that lesson.  Profitable lessons are always better than losses.  My total return came to 14.81%.  Proceeds and return do not include taxes but do include commission and fees. 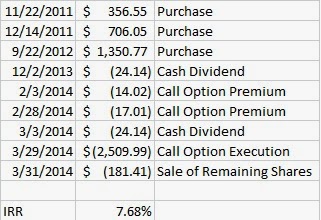 Honestly if management had at least given a token increase I'd probably still be an owner today.  However, no increase and with it seeming if every quarter management kept promising big results with mobile in the next quarter, or two quarters from now.  Every earnings call always had the promise of more to come but that's all it's been so far, promise.  I don't feel burned by Intel in the least and if they actually can improve on mobile and start to grow the company and most importantly the dividend then I wouldn't rule out the possibility of owning shares in the future.  For now though it feels good to not have to worry about the promise of next quarter getting pushed to the next one.

This sale decreased my forward 12-month dividends to $4,046.48 and I'll be looking for opportunities to invest the proceeds elsewhere.

Do you own shares of Intel?  Are you disappointed with the lack of a dividend increase?
Email Post
Labels: option strategy Recent Buy