Analysts expect ADM to grow earnings 10.00% per year for the next five years and I've assumed they can continue to grow at 3.50% per year thereafter. Running these numbers through a DCF analysis with a 11% discount rate yields a fair value price of $45.16. This means that at $26.17 the shares are undervalued by 42%.

Archer Daniels Midland's average high dividend yield for the past 5 years is 2.51% and for the past 10 years is 2.22%. This gives target prices of $27.91 and $31.51 respectively based on the current annual dividend of $0.70. These are overvalued by 6.3% and 17.0%, respectively. I feel that the 5 year average is going to be closer to the typical high yield point that you see as it has been creeping higher over the last 5 years. 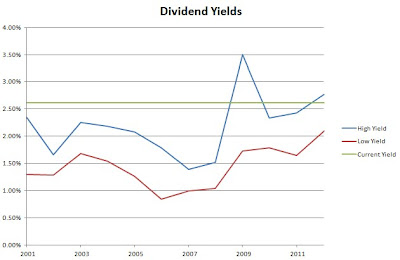 Archer-Daniels Midland's trailing PE is 14.22 and it's forward PE is 9.21. The PE3 based on the average earnings for the last 3 years is 8.94. I like seeing the PE3 being less than 15, which it is well under in this case. Compared to it's industry, ADM seems to be overvalued versus BG (13.13) as well as the industry as a whole (13.29). All industry comparisons are on a TTM EPS basis.

ADM's gross margin for FY 2011 and FY 2012 was 6.40% and 4.12% respectively. They have averaged a 7.89% gross profit margin since 2001 with a low of 4.12% in their most recent fiscal year. Their net income margin for the same years were 2.50% and 1.40% respectively. Margins are different across all industries and so in this case we'll compare ADM's values to it's industry rather than my normal benchmarks. Against their industry, ADM's gross profit margin is 89% of the industry average and their net profit margin is 76%. Both of these are a little troubling and show that ADM might not have the ability to pass on input costs to the customer and therefore margins contract. However, in better years they were above the industry averages in both gross and net profit margins. Their cash-to-debt ratio for the same years was 0.15 and 0.07. This too is troubling as they are moving in the wrong direction on top of not having a great starting point. I prefer to see a higher cash-to-debt ratio as it allows the company to smooth out the bad times with cash on hand.

ADM's shares outstanding had done pretty well from 2001 through 2010 with 3.50% total shares being bought back. However all of that was for naught in 2011 with a 5.80% increase. They have since started decreasing the shares outstanding once more. It seems to me that this is a case of management not needing to buyback shares and instead get the company on a little firmer ground. 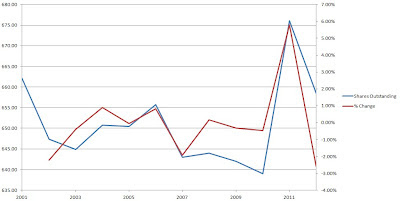 Archer-Daniels Midland is a dividend champion with 36 consecutive years of dividend increases. Their current annual dividend sits at $0.70 for a yield of 2.62%. ADM's annual increase for the last 1, 3, 5 and 10 years has been 10.48%, 8.25%, 9.76% and 13.10%. These numbers are different from the actual quarterly increases since these are based off the dividend paid out during each fiscal year. Their payout ratio has been pretty steady since 2001 with the highest being the most recent 37.23%. They have averaged a 24.51% payout ratio since 2001. This is a bright spot since it allows more room for increases. 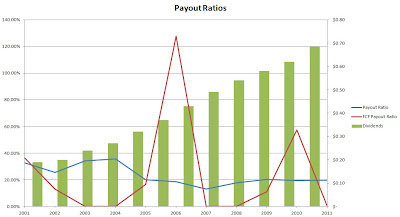 Their FCF per share has been all over the place and anything but consistent. The following chart is one of my favorite graphs to use to see the growth in dividends, free cash flow and earnings as well as their relative positions. FCF has rarely covered the annual dividends paid out which gets me a little worried; however, I believe that this is okay as long as the business is able to stay profitable which it has. 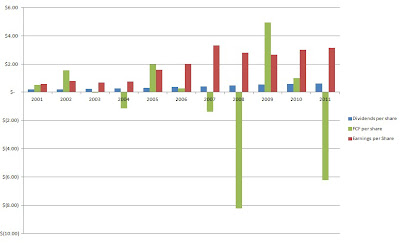 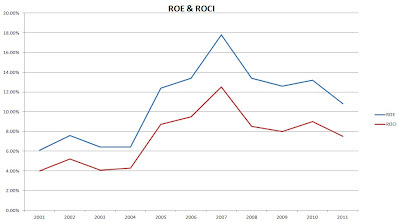 Since the basis of dividend growth is revenue and net income growth, we'll now see how Archer-Daniels Midland has done. Their revenue has been on a great growth trend with only one down year since 2001. Over that time revenue has grown at a CAGR of 13.23% and net income has grown at a 10.15% CAGR. If they could increase their net profit margin, ADM would be in a much better position. For a company like ADM that has been around since 1902 and increased dividends for 36 years I think they deserve the benefit of the doubt to work through the current tough times. Especially given that farming and food supply is becoming a more important global issue every day as the population continues to expand. 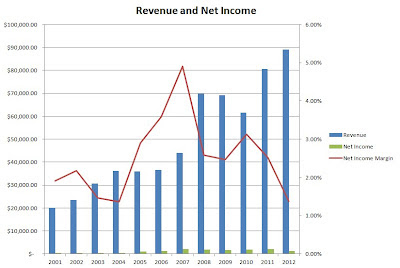 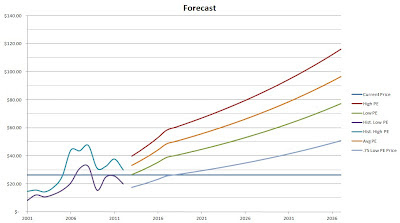 The chart shows the historical prices for the previous 10 years and the forecast based on the average PE ratios and the expected EPS values. I have also included a forecast based off a PE ratio that is only 75% of the average low PE ratio for the previous 5 years, 10 years or 16 whichever is least. I like to the look to buy at the 75% Low PE price or lower to provide for additional margin of safety. In this case the target PE is 7.10. This corresponds to a entry price of $17.40 based off the expected earnings for 2013. This means that Archer-Daniels Midland is trading at a $8.77 premium to this price. Unless the global economy goes tanks again I don't think you'll see ADM approach a $17 price or a 7.1 PE. Even though I typically look for 75% of the low PE, I don't think that really applies in this case since it's only traded less than 7.10 in 2009. In this case I would raise it up to at least the average of the last 5 years which was 9.47 giving a price target of $23.19.

The average of all the valuation models gives a fair value of $31.31 which means that Archer-Daniels Midland is currently trading at a 16.4% discount to the average fair value. I've also calculated the fair value with the highest and lowest valuation methods thrown out. In this case, the DCF and DDM valuations are thrown out and the new average is $30.90. Archer-Daniels Midland is trading at a 15.3% discount to this price.

I would say that overall Archer-Daniels Midland is undervalued and represents a good buying opportunity here. The entry yield is currently a little low with it only being 2.62% but with a dividend increase due soon your YOC should be above the 2.75% mark. And this is precisely why I purchased some shares at $25.73 which is a 17.8% discount to the average fair value and a 16.7% discount with the high and low valuations thrown out. I might be interested in selling some puts to lower the cost basis further if the premium is right.

What do you think about Archer-Daniels Midland as an DG investment?
Email Post
Labels: stock analysis