I expected a good month in January because my income was going to higher than normal, but with the markets going on a tear to start off 2013 I hit a pretty crazy number for a one month net worth increase.  Especially since my net worth isn't some crazy high number, this was a very meaningful change.  I had around $1,400 in combined 401k contributions and another $1,000 in ESPP withholding.  The 2 heavy lifters though in January were over $8,100 in savings from my net pay and the markets.  My latest round of ESPP shares were purchased adding to that position.  With the markets going almost straight up and lifting my employer's stock as well that added to the big gain for the month.

When it was all said and done my net worth increased a ridiculous $22,715 in one month.  Considering that's starting with a $155k base and not some multi-million that's pretty impressive to me.  This ended up being a 14.57% increase from the end of December and a great start towards hitting my goal of a $100k increase for the year.

My after-tax savings rate for January ended up at 85.35%.  I'm getting a great start on averaging an 80% savings rate for 2013 as well.  The emergency fund crept back up after being used in December and now covers 5.94 months of my average minimum expenses.

It was an incredible first month and a great way to kick off a new year of saving and investing.  While it's nice to see the markets go up, inflating the portfolio values in the process, I'd still rather be able to purchase shares outright because of a depressed market.  Who knows when that will come but at some point it will.  In the meantime I'll just look to sell some puts to at least get some kind of return and build some cash for the inevitable pullback.  Hope you were able to kill it to start off 2013!

I'm going to start adding a chart for those that are visual learners.  If anything the chart speaks to the power of being disciplined and consistent. 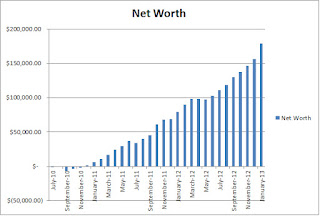