While cash flow is more important when it comes to financial independence, it's still good to look at the balance sheet too, which is why I provide these net worth updates.  What a difference a month makes.  The S&P 500 rebounded from January's decline to give a 4.3% increase during February.  Since more and more of my net worth is tied to the movements of the markets I see larger swings in my net worth based on how the markets perform.  As a dividend growth investor I'm not overly concerned with the short-term gyrations as long as the dividend stream remains in tact, but the markets' effect is noticeable.  January was a bit disappointing for my net worth with a decline of $1,000, but February helped to make up for the slow start to the year.  I had just over  Well the markets decided to take a bit of a breather and pull back some during late January.  I had just over $7,100 in after-tax savings from my paycheck, around $950 in ESPP contributions, $1,300 in 401k contributions counting the employer match, and like every February my employer's profit sharing 401k contribution goes through which provided another $5,600.  The rest of the changes were due to dividends received and changes in the stock market.  All in all February saw a $25,657.26 increase in my net worth.

Talk about a big change from January's balance.  I know I can't expect to repeat this month in and month out, although I wish I could, but this was a personal best as January 2013 was the previous high with almost a $23k increase.  Assets are well into the $500k level although I know that could easily come crashing down if the markets take a turn for the worse.  Liabilities mainly consist of the mortgage on our house and so very little progress gets made in decreasing the total liabilities.  For now I don't see the point in paying extra on the mortgage given our relatively low interest rate.  I think we'll come out much further ahead investing the difference and then once we're close to FI make the decision of whether to aggressively pay down the mortgage to be completely debt free.  We now have 20.51% equity in our house. 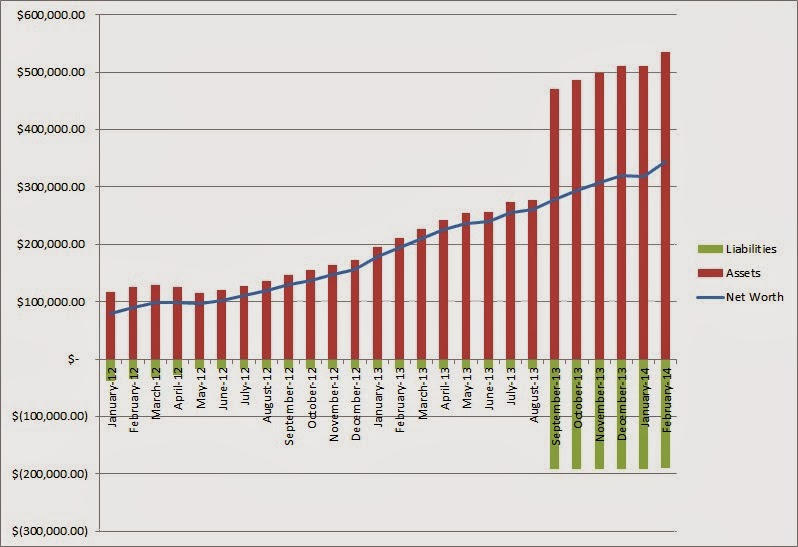 My after-tax savings rate for February came in at 54.23% which is over my goal of 50%, so depending on how the first quarter/half goes, I might be adjusting the target higher as well.  This is a big dropoff from 2013's 81.31% rate, but that's because I changed the way I calculate my savings rate.  It's now just savings from my after-tax income that is specifically marked for investment.  I need to do a better job of in-month tracking of my expenses, but the good thing is that while they've crept up it's not a huge increase over my normal baseline. 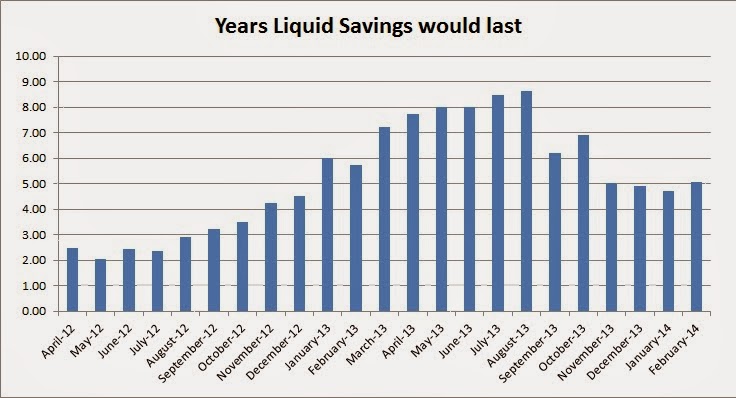 The trend in my liquid assets expense coverage finally reversed the 3 month declining trend.  As expenses hopefully head lower and savings move higher this ratio should continue to increase in most months.  Based on my expenses from February my liquid savings would last for 5.07 years.

Also, I'm starting a newsletter that I hope to get going over the next month or two so go on and be the first to sign up to receive new posts to your email and newsletter!