Dividend Growth Investing at Work - A Double Dose Of Increases

Based on the dividend increase history of my holdings April was expected to be a great month for dividend growth.  Among my holdings there were at least 7 increases that I was expecting and a possibility of double digit increases if things broke right.  Wednesday brought another increase announcement, there was even one I missed from Monday, and marked the 6th and 7th pay raises I've received this month alone among my FI Portfolio holdings.

On Wednesday afternoon the Board of Directors for Exxon Mobil approved an increase in the quarterly dividend from $0.73 to $0.75.  That's a 2.7% raise which came in lower than I was expecting, but it's still welcomed considering the beating the oil field has taken over the last 1.5 years.  This is the 34th consecutive year of dividend increases from the oil super major and places them well in the Dividend Champion category.  Shares current yield 3.39%.

Since I own 66.722 shares of Exxon Mobil in my FI Portfolio this raise increased my forward 12-month dividends by $5.34.  This is the 3rd dividend increase I've received from Exxon Mobil since initiating a position in 2013.  From dividend increases alone my Exxon Mobil income has increased by 19.1%!  According to USInflationCalculator the total inflation over that same time period is just 2.2% so Exxon Mobil is far outpacing the rate of inflation and increasing my purchasing power at a steady clip.

The following table shows the annual dividend payments, year over year increase, and the rolling 5 year compound growth rate for Exxon Mobil since 2001. 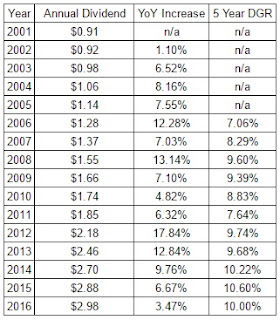 Exxon Mobil clearly has a wonderful history of dividend increases and surprisingly enough the rolling 5 year growth rates have been increasing over time.

The difficulties of the oil field have been well documented over the last 1.5 years with the price of oil plummeting to below $30 and every corner of the oil field struggling to cope.  This has led to reduced capital expenditures which are a necessary requirement for an industry built on constantly finding new reserves.

While things don't look pretty right now the oil field can turn on a dime and the price of oil has slowly been climbing and could keep moving higher.  Even though oil has risen back in the $40's it's still a long ways away from making the super majors uber profitable.  Due to the high correlation of profits and cash flow to the price of the commodities it's important for these companies to maintain pristine balance sheets in the good times so they can access the credit markets to hold them over through the bad times.  Debt to equity levels nearly doubled from 2014 to 2015; however, they are still at a very reasonable and manageable level of 0.12.

I missed this announcement on Monday but the Board of Directors at United Technologies approved an increase in the quarterly dividend from $0.64 to $0.66.  That's a 3.1% increase in the dividend and marks the 23rd consecutive year of dividend increases.  United Technologies is a Dividend Contender just 2 short years away from achieving Champion status.  Shares currently yield 2.49%.

The following table shows the annual dividend payments, year over year increase, and the rolling 5 year compound growth rate for United Technologies since 2001. 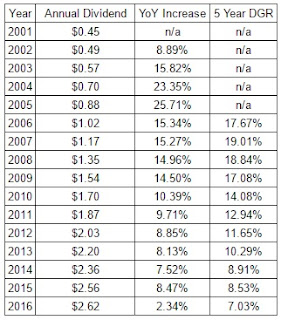 Dividend growth has been slowing last few years which is something to watch out for in the future and this latest increase didn't inspire a lot of confidence.  But a raise is a raise so we'll have to wait and see how things develop.

During 2015 United Technologies earned $8.62 per share so the new dividend rate would be a 30.6% payout ratio.  Free cash flow for 2015 came in at $4,237 M which puts the new dividend at a free cash flow payout ratio of 54.7%.  If the analysts can be trusted low dividend growth should have been expected for this year.  The average analyst estimate for 2016 puts the earnings at $6.53 so the payout ratio will jump to 40.6% if that plays out.  There is some light at the end of the tunnel though as analysts are predicting 9.1% annualized growth of earnings over the next 5 years.

My forward dividends increased by $6.46 with me doing nothing.  That's right, absolutely nothing to contribute to their operations.  Based on my portfolio's current yield of 2.98% this raise is like I invested an extra $217 in capital.  Except that I didn't!  Two of the companies I own just decided to send more cash my way.  That's how you can eventually reach the crossover point where your dividends received exceed your expenses.  That's DIVIDEND GROWTH INVESTING AT WORK!  The beauty of the dividend growth investing strategy is that you build up your dividends through fresh capital investment as well dividend increases from the companies you own.

I was expecting just 7 increases during April, but have already received 7 thanks to the Wells Fargo increase that was a bit unexpected.  There's still one more to go, Johnson & Johnson, and the recent earnings release could bring about a higher than expected dividend increase.  So far this year I've received 21 increases from 19 companies increasing my forward 12-month dividends by $94.57.

Have you been joining in on the dividend growth fun?