With the recent pullback in the markets and especially in tech I figured I would take a look at Intel Corporation (INTC). I currently own just over 45 shares of Intel and would be interested in adding more at the right price. Intel closed on Thursday 5/31/12 at $25.84.

Analysts expect Intel to grow earnings 11.80% per year for the next five years and I've assumed they can continue to grow at 3.50% per year thereafter. Running these numbers through a DCF analysis with a 11% discount rate yields a fair value price of $45.23. This means that at $25.84 the shares are undervalued by 43%. 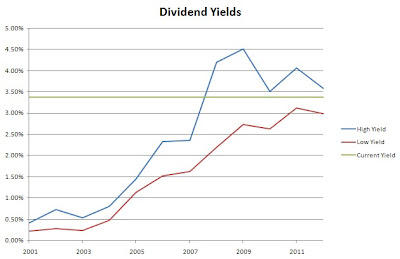 For the DDM I assumed that Intel will be able to grow dividends for the next 5 years at the minimum of 15% or the lowest of the 1, 3, 5 or 10 year growth rates. In this case that would be 11.54%. After that I assumed INTC can continue to raise dividends by 3.50% annually and used a discount rate of 8%. Based on this INTC is worth $25.70 meaning it's fairly valued at $25.84. While I think that Intel can continue to increase it's dividend by more than 3.50% per year after 5 years it's a good estimate to use to give a conservative valuation price.

INTC's trailing PE is 10.95 and it's forward PE is 9.61. The PE3 based on the average earnings for the last 3 years is 14.99. Compared to it's industry, INTC seems to be undervalued versus TXN (18.40) and undervalued versus the industry as a whole (18.97). All industry and competitor comparisons are on a TTM EPS basis.

Intel's gross margin for FY 2010 and FY 2011 was 65.31% and 62.51% respectively. Their gross margin is very high at greater than 60% and consistent too. I like to see both a steady gross margin and greater than 40%. Their net income margin for the same years were 26.28% and 23.97% respectively. I like the net income margin to be at least 10% and preferably rising. Intel is doing great on the net profit margin with a consistent 20%+. The cash-to-debt ratio for the same years were 2.65 and 0.71. I don't like to see the debt to increase as much as it did from 2010 to 2011. Their debt increased 3.5 times from the end of 2010 to the end of 2011. This is something to take notice of because financing the growth of the company through debt can get them in to trouble which could lead to issues with their dividend.

INTC has bought back an average of 2.83% of their shares outstanding annually since 2002. 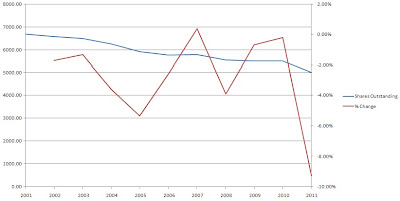 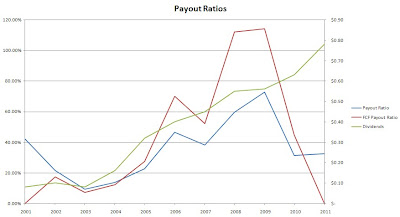 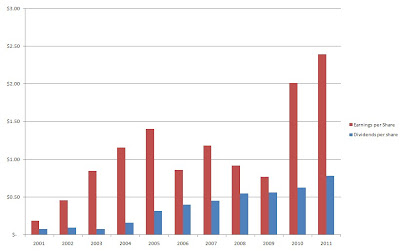 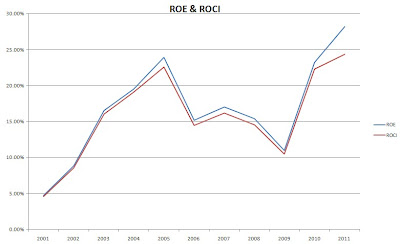 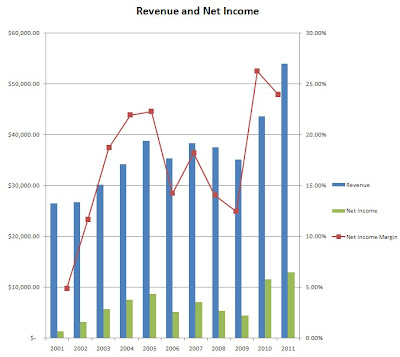 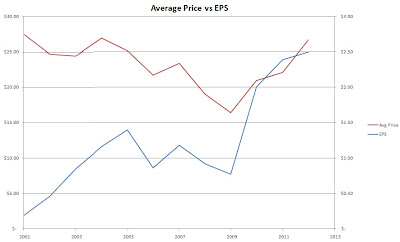 Intel's average share price has not followed the path of their EPS mainly due to the fact that in 2001 during the tech bubble bursting they had a ridiculously high PE ratio. Currently Intel is lower than it's average low PE ratio. 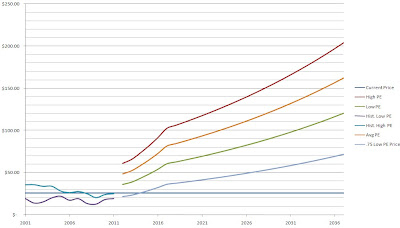 The chart shows the historical prices for the previous 10 years and the forecast based on the average PE ratios and the expected EPS values. I have also included a forecast based off a PE ratio that is only 75% of the average low PE ratio for the previous 5 years, 10 years or 16 whichever is least. I like to the look to buy at the 75% Low PE price or lower to provide for additional margin of safety. In this case the target PE is 8.56 which in my opinion is too low for Intel to sell for which corresponds to a $21.39 entry price. Intel is trading at a $4.45 premium to the forecast entry price.

The average of all the valuation models gives a fair value of $30.40 which means that Intel is currently trading at a 15% discount to the average fair value.

While it looks like Intel is pretty close to being a good investment with a solid margin of safety it does have it's issues. The sale of desktop and laptop computers which were huge drivers for growth for Intel in the past have been decreasing. While their chips are dominating the server market they are severely lacking in the smart phone and tablet computer markets. They have been researching methods to decrease the power consumption of their chips while providing more processing power. If they can break into the tablet and mobile markets Intel will prove to have a second phase to their growth story.

At a 3.50% target yield you would need to buy at the $25.71 mark and for a 4.00% yield the purchase price would need to be $22.50. If Intel stays at current levels when I am able to purchase next month I'll be adding to my current position. And a further drop in tech or the markets as a whole could bring about the 4.00% yield level.
Email Post
Labels: stock analysis