Like my Coca-Cola stock analysis I was surprised when I looked back through my stock analysis archives that I had never posted about Medtronic (MDT).  I had actually gone through the full analysis back in June of this year but couldn't find my post so I"m assuming I ended up getting busy with last minute wedding stuff. Medtronic is another one of the companies that I would love to own a piece of but the price just hasn't been there when my capital was available.  Medtronic closed trading on Monday, December 10th at $42.60.

Analysts expect Medtronic to grow earnings 5.21% per year for the next five years and I've assumed they can continue to grow at 3.50% per year thereafter, right around the long term inflation rate. Running these numbers through a two stage DCF analysis with a 10% discount rate yields a fair value price of $59.83. This means that at $42.60 the shares are undervalued by 28.8%.

Medtronic's average high dividend yield for the past 5 years is 2.50% and for the past 10 years is 1.75%. This gives target prices of $41.53 and $59.57 respectively based on the current annual dividend of $1.04. These are overvalued by 2.6% and undervalued by 28.5%, respectively.  I think the average high yield is going to be creeping higher over the next few years so I'll use the higher 5 year average price target in the fair value calculations. 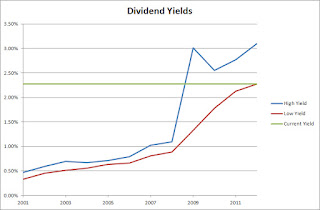 Medtronic's average low PS ratio for the past 5 years is 2.42 and for the past 10 years is 3.84. This corresponds to a price per share of $38.51 and $61.20 respectively based off the analyst estimate for revenue growth from FY 2012 to FY 2013.  Their current PS ratio is 2.64 over the last 12 months.  The 5 year and 10 year low PS price targets are overvalued by 10.6% and undervalued by 30.4%.  Like the high dividend yield and low PE ratio valuations I think the 5 year average will be more typical going forward than the 10 year averages thanks to the overvaluation in the early 2000's.

For the DDM, I assumed that Medtronic will be able to grow dividends for the next 5 years at the minimum of 15% or the lowest of the 1, 3, 5 or 10 year growth rates. In this case that would be 7.78% from the 1 year growth rate.  After that I assumed they can continue to raise dividends for the next 5 years at 75% of 7.78%, or 5.83%, and by 3.50% in perpetuity.  The dividend growth rates are based off fiscal year payouts and don't necessarily correspond to quarter over quarter increases.  To calculate the value I used a discount rate of 10%. Based on this, Medtronic is worth $20.33 meaning it's overvalued by 109.5%.

Medtronic's trailing PE is 12.95 and it's forward PE is 11.04.  The PE3 based on the average earnings for the last 3 years is 14.41. I like to see the PE3 be less than 15 which Medtronic is currently under.  Compared to it's industry, MDT seems to be undervalued versus JNJ (23.12) and BDX (13.86).  Against the industry as a whole, MDT is undervalued with the industry carrying a PE ratio of 20.26.  All industry comparisons are on a TTM EPS basis.  Medtronic's PEG for the next 5 years is currently at 2.24 while Johnson & Johnson is at 2.26 and Beckton Dickinson is 2.03.  A low PEG ratio is better because it means that you're paying less for the growth of the company.  Medtronic's PEG is on par with JNJ's but well above BDX.

Medtronic's gross margin for FY 2011 and FY 2012 were 81.6% and 79.6% respectively. They have averaged a 80.2% gross profit margin since 2001 with a low of 79.00% in FY 2007. Their net income margin for the same years were 19.4% and 22.3%.  Since 2001 their net income margin has averaged 19.4% with a low of 14.9% in FY 2009.  I typically like to see gross margins greater than 60% and at least higher than 40% with net income margins being 10% and at least 7%.  Medtronic obliterates both of these criteria.  Since each industry allows for different margins it's prudent to see how MDT compares to their industry.  For FY 2012 Medtronic captured 115.4% of the gross margin for the industry and 143.7% of the net income margin.  This is very promising because it means that their operations are more efficient and that they have some pricing power.  It also means that for every $1 in revenue they are able to turn more into profit for the company that can either be reinvested back in the company or returned to shareholders.  Their cash-to-debt ratio for the same years were both 0.17.  I prefer for company's I'm investing in to have very little debt on their books and to have a cash-to-debt ratio greater than 1.  This is the only real blemish from a fundamentals perspective.

Medtronic's shares outstanding decreased more years than not since the end of FY 2001.  They're bought back over 14% of the shares outstanding in that time, with an average of 1.39% purchased each year.  By repurchasing shares, Medtronic is able to increase EPS and management can return cash to shareholders this way by increasing the ownership share of the company for all the oustanding shares. 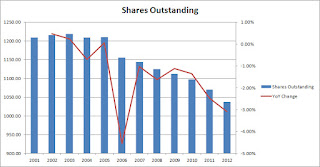 Medtronic is a dividend champion with 35 consecutive years of dividend increases.  Their current annual dividend sits at $1.04 for a current yield of 2.44%. MDT's annual increase for the last 1, 3, 5 and 10 years have been 7.78%, 8.95%, 17.13% and 15.48%. These numbers are different from the actual quarterly increases since these are based off the dividends paid out during each fiscal year.  Despite the really nice DGR, their payout ratio has only increased from 23.53% in FY 2001 to 30.12% in FY 2012.  The highest payout based off earnings was the recent FY 2009 rate of 38.86%.  Considering they've been growing the dividend with over 15% annual increases over the last 10 years, it's very nice to see that the payout ratio hasn't increased at the same rate. 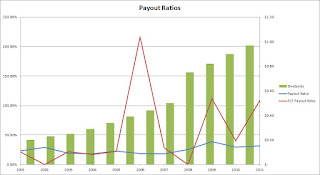 Their FCF per share has been pretty good over the years.  Since FY 2001 they had only 2 negative years, both of them in very trying economic times in 2002 and 2009.  Their FCF payout ratio at the end of FY 2012 was a miniscule 36.2%.  With such a large cushion it leaves room for management to continue increasing the dividend without hurting the company's cash flow. 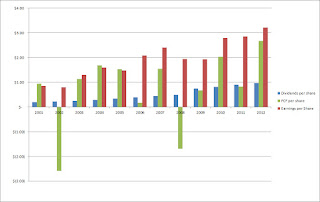 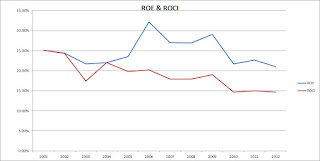 Since the basis of dividend growth is revenue and net income growth, we'll now look at how Medtronic has done on that front.  Their revenue growth since 2001 has been a great 10.22% per year and their net income has been growing at an 11.94% rate since 2001.  Since their net income has been growing faster than revenue their net income margin has increased from 18.84% to 22.35% between FY 2001 and FY 2012.  This means that management has been able to get operations more efficient and they are able to keep more pennies from every dollar of sales to reinvest in the company or return to shareholders.  Revenue has grown every year except since FY 2001. 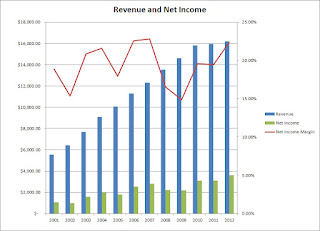 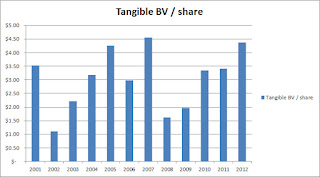 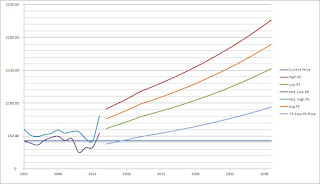 The chart shows the historical high and low prices since 2001 and the forecast based on the average PE ratios and the expected EPS values. I have also included a forecast based off a PE ratio that is only 75% of the average low PE ratio for the previous 5 years and 10 years whichever is least.  Since I think the 5 year average low PE of 13.80 is going to be more typical for MDT, I'll use that number.  I like to the look to buy at the 75% Low PE price or lower to provide for additional margin of safety. In this case the target low PE is 13.80 and the 0.75 * PE is 10.35 . This corresponds to a entry price of $37.77 based off the expected earnings for FY 2013 of $3.65.  Currently Medtronic is trading at a $4.83 premium to the 75% low PE target price.

Overall I would say that Medtronic is in the fair value range but a further pullback would be welcomed.  My average fair value calculation is more of a low value price target since I'm taking the low PE, dividend and PS ratios to calculate the value.  Picking up shares for less than my "average fair value" calculation price targets is usually a sign that you're getting a really good value on the shares as long as nothing has fundamentally changed with the company to give prices that low.  As as DG investor the starting yield is lacking on Medtronic but could be made up very quickly if their DG can remain at the elevated rate for several more years.

I thought we should also take a look at the potential returns that you could be looking at if you buy in at the $42.60 level.  If Medtronic can grow their EPS at the rates that I used in my DCF analysis then after 10 years their EPS will be $5.43.  Applying the 5 year average low PE ratio of 13.80 to the EPS would mean that shares would be trading for $74.89.  This would be a 75.79% return over 10 years.  However we also have to account for the dividends.  In that same time you would have received $14.57 in dividends if they can grow dividends at the rates I used in my DDM analysis.  This would represent a further return of 34.21% if dividends are not reinvested.  The 10 year total return would be 110%, for average annual return of 7.70%.  I can live with a 10 year return over 7% before inflation and approximately 4% after inflation.  I borrowed this idea from Dividend Growth Stock Investing.

Yesterday I went ahead and started a position with Medtronic.  I now have more of a pure play on the healthcare industry which was lacking in my portfolio.  I didn't get the best possible value but I will be looking to average down my position if a pullback in MDT shares occurs.  If the current yield rises to a 3.00% level I'll be picking up at least one more lot of shares.  The 2.75% yield level corresponds to a $37.82 price target and the 3.00% yield level is at $34.67.  Since the ex-div date is on 12/13 I'll be receiving their next dividend payment later this month.  Medtronic has moved their first quarter dividend up by a month to get the payout in before the potential tax increases.  I'm not too worried about the dividend tax increases, but I'll take the payment earlier to start the compounding process.

What do you think about Medtronic as a DG investment at today's prices?
Email Post
Labels: stock analysis