I wanted to take a more in depth look at a company I've sold some puts on, Cisco (CSCO).  Cisco is by no means a dividend champion, challenger, or even contender with only 2 years of increases, but the potential is there for rapid growth so I figured we should look a bit more into the company.  Cisco closed trading on Friday, May 17th at $24.04.

Analysts expect Cisco to grow earnings 8.33% per year for the next five years and I've assumed they can continue to grow at 3.50% per year thereafter. Running these numbers through a two stage DCF analysis with a 12% discount rate yields a fair value price of $28.19. This means the shares are trading at a 14.0% discount to the DCF. 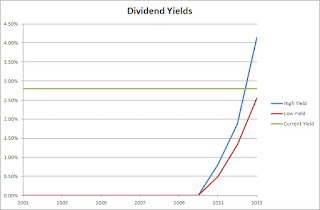 Cisco's average low PE ratio for the past 5 years is 13.74 and for the past 10 years is 16.64.   This corresponds to a price per share of $27.49 and $33.28 respectively based off the analyst estimate of $2.00 per share for fiscal year 2013.  As Cisco has become a more mature company their P/E ratios have been contracting.  Going forward I expect the 5 year range of 13.74 to 20.92 to be more typical although I still think it will come down from here.  For this reason I'll calculate a target entry price based off a low P/E ratio of 10 going forward which gives a target entry price of $20.00.  Cisco is currently trading at a 21.2% premium to this price.

Cisco's average low PS ratio for the past 5 years is 2.41 and for the past 10 years is 3.20.  This corresponds to a price per share of $22.13 and $29.31 respectively based off the analyst estimate for revenue growth from FY 2012 to FY 2013.  Currently, their current PS ratio is 2.70 on a trailing twelve months basis.  I'll use the 5 year average in my calculations just to be conservative.  Cisco is currently trading at a 9.5% premium to this price.

For the DDM, I assumed that Cisco will be able to grow dividends for the next 5 years at the minimum of 15% or the lowest of the 1, 3, 5 or 10 year growth rates. In this case that would be 15%.  Cisco doesn't have a long history of growing their dividend since they first initiated it in April 2011 but the growth has been fantastic since.  With more of the "old tech" companies building their history of increasing the dividend I think Cisco will continue to do so.  After that I assumed they can continue to raise dividends for 3 years at 75% of 15% or 11.25% and in perpetuity at 3.50%.  The dividend growth rates are based off fiscal year payouts and don't necessarily correspond to quarter over quarter increases.  To calculate the value I used a discount rate of 10%.  Based on the DDM, Cisco is worth $19.40, meaning it's overvalued by 24.9%.

Cisco's shares outstanding have been decreasing the last 10 years.  Since FY 2002, they've purchased 27.4% of their shares outstanding for an average annualized decrease of 3.2%.  Looking at the amount spent on share buybacks, it slowed in 2012 and over the TTM.  So management could be feeling that the share price is closer to fairly valued at more recent price.  By repurchasing shares, Cisco is able to increase EPS and management can return cash to shareholders this way by increasing the ownership stake of the company for all the outstanding shares. 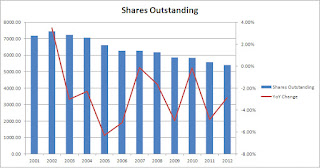 Cisco is far from being a dividend champion or even a challenger with only 3 years of increasing dividends under their belt, assuming the dividend is maintained the rest of this year.  Their current annual dividend sits at $0.68 for a yield of 2.81%.  Cisco's quarterly increases have been 33.3%, 75.0%, and 21.4%.  The last 2 increases have been after just 2 quarters so the annualized rates are even higher.  Since initiating the dividend, the payout ratio has averaged 14.5%.  Based on the analyst estimate of $2.00 in EPS for FY 2013 and the forecast dividends of $0.62, the payout ratio for FY 2013 should come in around 31%.  The payout ratio is still plenty low to allow for mid double digit growth rates of the dividend.  If EPS increases at the analyst estimate of 8.33% they can increase dividends at 11.50% and maintain a constant payout ratio assuming the share buyback program continues to retire ~3.2% of the shares outstanding each year.  Having a low payout ratio leaves more room for management to increase the dividend without overly burdening the underlying business. 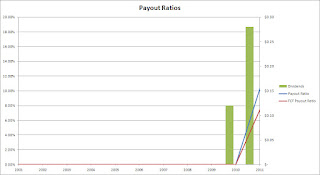 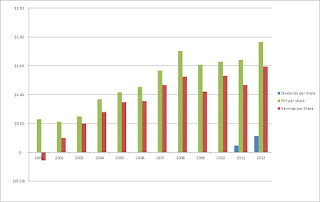 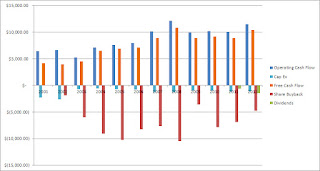 Cisco's ROE has averaged 19.3% since 2003 and has been very strong since then although a bit more volatile than I'd like ranging from 12.6% to 26.5%.  Their ROCI has averaged a 15.9% since 2003 and like their ROE has been very strong but more volatile than I'd like to see.  I don't necessarily look for any absolute values, rather I like to see stable to increasing levels over the long term.  Cisco's ROE and ROCI are both not exactly stable, but even in the down years it's still being maintained a solid levels.

Since the basis of dividend growth is revenue and net income growth, we'll now look at how Cisco has done on that front.  Their revenue growth since 2002 has been solid with a 9.31% annual increase and their net income has been growing at a 15.56% rate.  Since their net income has been growing faster than revenue, their net income margin has increased from 10.0% to 17.5% between FY 2002 and FY 2012.  Over that time, Cisco has had 2 years of decline in revenue , FY 2003 and FY 2009.  The first decline was marginal with in the grand scheme of things but the FY 2009 decrease was pretty significant.  Considering all of the issues that were going on with the economy between FY's 2009 and 2009 the decline wasn't that bad.  They've already surpassed the previous high for revenue and continued their growing ways. 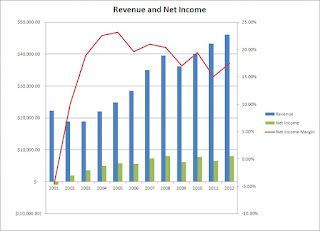 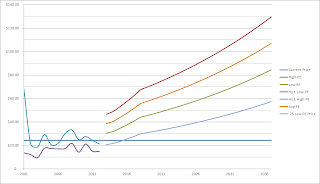 The chart shows the historical high and low prices since 2001 and the forecast based on the average PE ratios and the expected EPS values. I have also included a forecast based off a PE ratio that is only 75% of the average low PE ratio.  I like to the look to buy at the 75% Low PE price or lower to provide for additional margin of safety, although this price doesn't usually come around very often. In this case the target low PE is 15.2 and the 0.75 * PE is 10.3.  This corresponds to an entry price of $30.38 based off the expected earnings for FY 2013 of $2.00, with a 75% target price of $20.61. The average PE price would give a target price of $38.49.  Currently Cisco is trading at a $3.63 premium to the 75% low PE target price and a $14.25 discount to the average PE price.  If you believe the analyst estimates are pretty close, then Cisco is trading on the lower end of it's typical range.

The average of all the valuation models gives a target entry price of $22.18 which means that Cisco is currently trading at a 9.3% premium to the target entry price. I've also calculated it with the highest and lowest valuation methods thrown out.   In this case, the DCF and DDM valuations are removed and the new average is $21.38.  Cisco is trading at a 13.4% premium to this price as well.

Overall, I would say that Cisco is currently fairly valued after jumping over 14% after their latest quarterly earnings release.  Most of their competitors had bad quarters while Cisco continued to shine in the last quarter.  Cisco is the market leader although the moat isn't as wide with it being a technology company.  It's too easy for some groundbreaking technology to come along and quickly make their products obsolete.  As I mentioned in my first put option post on Cisco, according to Internet World Stats only 34% of the global population has access to the internet.  We're still probably decades away from having everyone connected, but there's plenty of room for growth in Cisco's product line.  As smartphones and tablets continue to be more involved in our everyday lives, Cisco is in an enviable position being a market leader and providing the backend technology to satisfy everyone's data consumption needs.  I only see computer networking increasing in the future and Cisco's line up of routers, switches and various other products to grow as well.  From a dividend growth stand point Cisco has plenty of room to increase the dividend at a double digit rate for years to come.  The issue is whether management will truly commit to annually increasing the dividend like clockwork.  They have a very short history just recently hitting the 2 year mark in April 2013.

I'd be interested in purchasing Cisco, but like most other companies I want to own, just not at today's prices.  So I'm left with 2 options, either just sit tight and wait for the price to retreat or I can sell put options.  I don't see any combinations of strike price and option premium to allow for solid returns if it expires or a great entry price if it's executed so for now I'll just sit on my cash and look for other opportunities.

What do you think about Cisco as a DG investment at today's prices?  Do you think they'll continue with increasing the dividend or was this just a play to boost the share price with many investors flocking towards dividends?
Email Post
Labels: stock analysis