The markets continued their climb higher and brought my portfolio along for the ride since more and more of my net worth is tied to the markets.  While I don't necessarily care too much about the value of my portfolio increasing as much as the dividend stream increasing, a rising number is still good to see.  I had an absolutely outstanding month of saving with over $7,200 from my after-tax pay going straight into savings.  Got to love months like that.  I also had a little over $1,300 in total contributions to my 401k and just under $1,000 for my ESPP withholding.  Those made up the bulk of my net worth increase that I could control, the rest was from market fluctuation and of course the dividends received.
Current Assets: $242,786.43
Curent Liquid Assets: $126,453.53
Current Debts: -$16,975.43
Net Worth: $225,811.00

The start to this year has been absolutely mind boggling.  I was planning to have a good year through my goals that I had set but I didn't foresee anything close to this.  Although I didn't expect the markets to go gangbusters to start the year either.  Eventually the momentum will change directions but for now I'll just take what comes.  I've actually re-checked the formulas in my spreadsheet because I didn't think they were right, but everything jives so these numbers are accurate to the best of my knowledge.  By the end of the April, I'd had my third highest monthly net worth increase.  Take that March you just got bumped down to fourth best.  April brought about an increase of +$15,538.71, and pushed the total up to $225,811 mark.  This ended up being a 7.39% increase from March and so far in 2013 I've increased my net worth by $69,858.82 or 44.80%.  Through 4 months of the year I'm now 69.86% of the way towards my goal of having a $100k increase.  So yeah, that number will be revised higher with the mid year goal checkup.

My after-tax savings rate for April ended up at 84.18% which was solidly above my 80% target.  May should be another good savings rate month but June will see a dip.  Not from lack of trying though, just from a lower than normal income.  I'm now averaging 84.04% for 2013 so far which is a great start towards my 80%+ after tax savings goal for this year. 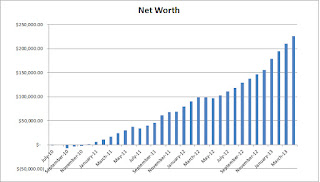 I decided to also add one more chart to my monthly updates.  This chart will show the number of years that my liquid net worth, essentially cash/checking/savings/brokerage accounts, would last based on the spending for the corresponding month.  For April, this number came to 7.71 years, a nice 0.50 year increase. 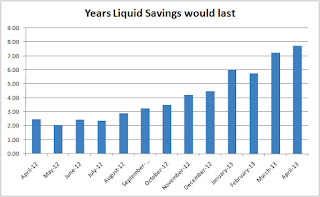 How was your April?  Did you do better or worse than you expected this month?
Email Post
Labels: financial independence net worth