With talks of the Federal Reserve ending QE Infinity and interest rates rising, the markets went on a pretty wild ride in June.  The S&P 500 dipped about 5% over a short time and then recovered just as quickly.  I'm hoping for more and more gyrations in the market despite the negative short term effects on my portfolio and in turn my net worth.  I was actually surprised by my net worth calculation and figured I had to have a formula that somehow got messed up.  I haven't found anything yet, but the much lower increase for June surprised me.  The change in value was due to $825 in combined 401k contributions, $600 in ESPP withholding, over $5,200 in savings from my take-home pay, and then of course dividends, interest and market fluctuation.

It was actually a pretty disappointing month for my net worth, although it was still positive.  I managed only a $3,169.04 increase.  A far cry from the almost $16,200 average through the first five months.  I know that I did my part though and that Mr. Market accounted for much of the negative swing.  This was a 1.34% increase of May's net worth and is 84.16% of the way towards my goal of a $100k increase for the year.  I'll be revising my goal for the year higher but I'm still not sure what I should aim for.  I'm leaning towards another $65k increase through the 2nd half of the year, although the numbers could get messy with my wife and I starting to look for a house. 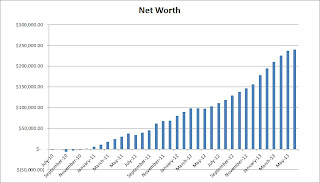 My after-tax savings rate for June ended up at 77.71% which was my lowest so far in 2013.  This was expected thanks to having lower than average income but July should see 80%+ again.  I'm now averaging 82.55% through the first half of the year which is phenomenal.  This is currently ahead of my 80%+ savings rate goal. 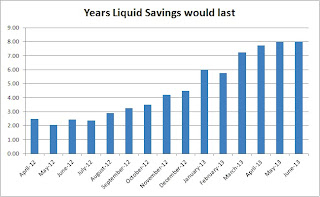 My non-retirement accounts net worth would increased, although very slightly to 8.01 years from 7.99 at the end of May.  It's pretty amazing to see that with just my liquid assets I could cover my minimum expenses for over 8 years.  It would have been higher had my spending/budgeting gone better but the expenses weren't anything too outrageous.

How was your June?  Did you do better or worse than you expected this month?
Email Post
Labels: financial independence net worth