If you look at my portfolio you'll notice that it's lacking exposure to the food industry.  Specifically those weekly repeat purchase foods such as potato chips and other snack foods.  Coca-Cola is my only current exposure there and I'd like to have at least another company working for me.  While compiling my watchlist last week in anticipation of further weakness in the markets, I mentioned that Pepsi would be a good fit because I'd get to own the other half of the cola duopoly in addition to a wonderful snack food business.  Pepsi closed trading on Friday, October 11th at $80.83, offering a current yield of 2.81%.  I had last looked at Pepsi back in November of 2012, so it's time to update my analysis to see what's has changed and if it still represents good value.

Analysts expect Pepsi to grow earnings 8.20% per year for the next five years and I've assumed they can grow at 2/3 of that, or 5.47%, for the next 3 years and continue to grow at 5.00% per year thereafter. Running these numbers through a three stage DCF analysis with a 10% discount rate yields a fair value price of $95.66. This means the shares are trading at a 15.5% discount to the discounted cash flow analysis.

The Graham Number valuation method was conceived of by Benjamin Graham, the father of value investing, and calculates the maximum price one should pay for a company given the earnings and book value.  Pepsi earned $4.25 per share in the last twelve months and has a current book value per share of $14.73.  The Graham Number is calculated to be $37.53, suggesting that Pepsi is overvalued by 115.4%.

Pepsi's average high dividend yield for the past 5 years is 3.34% and for the past 10 years is 2.75%.  This gives target prices of $67.91 and $82.47 respectively based on the current annual dividend of $2.27.  I'm more inclined to think the 5 year average is more realistic over the foreseeable future as the overall growth of the company should slow.  So I'll use the 5 year average for my target entry price calculation.  Pepsi is trading at a 19.0% premium to this price. 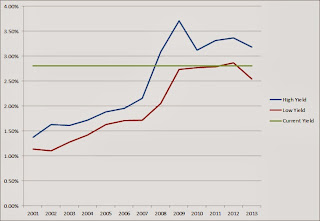 Pepsi's average low PS ratio for the past 5 years is 1.56 and for the past 10 years is 2.01.  This corresponds to a price per share of $70.81 and $91.16 respectively based off the analyst estimate for revenue growth from FY 2012 to FY 2013.  The price targets don't include effects due to potential share buybacks, rather it's just based off the analyst estimate for revenue and growth to be a bit conservative.  Currently, their current PS ratio is 1.89 on a trailing twelve months basis.  To be conservative I'll use the 5 year average low P/S ratio in my target entry price calculation.  Pepsi is currently trading for a 14.2% premium to this price.

The Gordon Growth Model is a quick way to calculate the fair value of a company using the current dividend, the expected dividend growth rate, and your required rate of return or discount rate.  Assuming a constant 5.00% dividend growth rate and a discount rate of 10.00%, the GGM valuation method yields a fair price of $45.40.  Pepsi is currently trading at a 78.0% premium to this price.

Pepsi's gross margins for FY 2011 and FY 2012 were 56.4% and 56.1% respectively. They have averaged a 57.7% gross profit margin over the last 10 years.  Their net income margin for the same years were 9.7% and 9.5%.  Since 2003 their net income margin has averaged 12.6%.  I typically like to see gross margins greater than 60% and at least higher than 40% with net income margins being 10% and at least 7%.  Their gross margin is very close to the 60% level so I'm not concerned with that at all.  While their average net income margin over the last 10 years is above the 10% threshold, the trend has been negative.  It's still above the 7% minimum, but I'd like to see the trend start to turnaround.  Since each industry is different and allows for different margins, I feel it's prudent to compare PEP to its industry.  For FY 2012, Pepsi captured 100.9% of the gross margin for the industry and 81.2% of the net income margin.  On the gross margin front their tracking with the industry, but when it comes to the bottom line of the income statement, Pepsi is lacking by a big margin.  I have a feeling this is due to their snack business not being as high margin as their cola business which is a drag on their overall margin levels.

Pepsi's management generally purchases shares to reduce the share count.  The shares outstanding have declined in all but two years since FY 2002.  Overall they've bought back 8.5% of their shares for an average annual decline of 0.89%.  When we examine the cash flow later you'll see that management wasn't all that prudent with their buybacks as they had some of their largest buyback years leading up to the "Great Recession" and couldn't capitalize on the cheap prices over the subsequent years.  This is why share buybacks can be useful, but only if management is prudent with that capital. 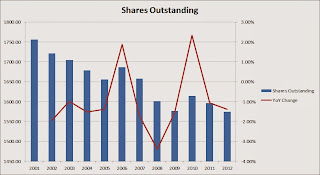 Pepsi is a dividend champion with 41 consecutive years of dividend increases.  That's quite an impressive streak for any company.  They have increased the dividend at a 4.99%, 5.92%, 6.67%, and 13.55% rate over the last 1, 3, 5, and 10 year periods respectively.  Dividend increases are based off fiscal year payouts and don't necessarily correspond to annual payouts.  Their payout ratio based off EPS has averaged 42.3% over the last 10 years, but was 53.7% in FY 2012.  Their payout ratio has been increasing over time which has allowed them to grow their dividend faster than EPS.  Dividend growth has been trending down which is a little worrisome; however, analysts do expect for earnings to grow over 8% per year over the next five years which could allow management to increase dividends in the 7-8% range while lowering their payout ratio.  I wouldn't expect 10%+ growth rates unless the outlook for the company changes significantly. 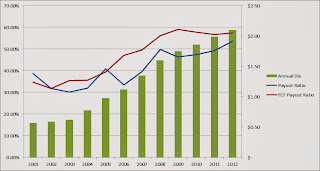 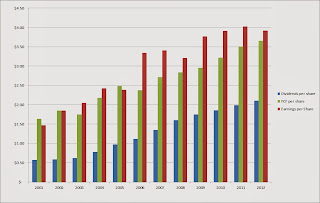 Pepis has done a decent job at managing their cash flow.  Over the last 5 years they've been able to turn 65.2% of their operating cash flow into free cash flow and 27.6% of their operating cash flow into free cash flow after paying the dividend.  Their free cash flow has grown from $3.190B in 2002 to $5.765B in 2012, good for a 6.1% annualized increase, while their free cash flow after dividends has grown from $2.149B to $2.460B over the same time for a 1.4% annual increase.  The free cash flow payout ratio has averaged 49.5% over the last 10 years, but has been trending higher and was 57.5% in FY 20012.  As the dividend has been increasing faster than overall growth of the company, the FCF payout ratio has been expanding.  Once again, signs point to just average dividend growth in the 5-8% range if the growth of the company doesn't increase much faster. 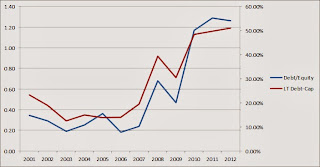 Since the basis of dividend growth is revenue and net income growth, we'll now look at how Pepsi has done on that front.  Their revenue growth since the end of FY 2002 has been excellent with a 10.0% annual increase while their net income growth has lagged with only a 6.5% annual growth rate.  This has led to the net profit margin deteriorating down to 9.5% in FY 2012.  Although a good sign is that over the last twelve months the net income margin is back up over 10%. 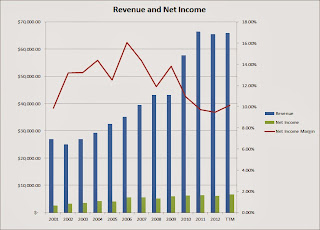 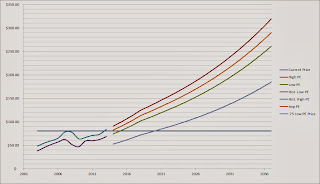 The chart shows the historical high and low prices since 2001 and the forecast based on the average PE ratios and the expected EPS values. I have also included a forecast based off a PE ratio that is only 75% of the average low PE ratio.  I like to the look to buy at the 75% Low PE price or lower to provide for a larger margin of safety, although this price doesn't usually come around very often. In the case of Pepsi, the target low PE is 15.77 and the 0.75 * PE is 11.83.  This corresponds to an entry price of $68.61 based off the expected earnings for FY 2013 of $4.35, with a 75% target price of $48.60.  Currently Pepsi is trading at a $32.23 premium to the 75% low PE target price and a $12.22 premium to the average low PE price.

The average of all the valuation models gives a target entry price of $60.40 which means that Pepsi is currently trading at a 33.8% premium to the target entry price. I've also calculated it with the highest and lowest valuation methods thrown out.   In this case, the DCF and DDM valuations are removed and the new average is $58.05.  Pepsi is trading at a 39.2% premium to this price as well.

According to Yahoo! Finance the 1 year target estimate is at $90.67 suggesting about 12% upside from Friday's trading.  Morningstar has Pepsi rated as a 4 star stock suggesting that it's trading below their fair value estimate.

I really like the company and would love to own the other half of the cola duopoly and the snack business is just a plus.  While I don't think it's a steal at current prices, it is around the fair value using the average P/E, P/S and dividend yield models with a target fair value price of $82.84.  Management is clearly committed to the dividend as well as increasing it as they've done so for the past 41 years.  I expect some muted dividend growth going forward, but still well above inflation at 4-8% annual increases so that management can get their payout ratios back in better shape.  Although I can still live with 4-8% annual increases.  If the share price pulls back to the mid to upper $70's I'd be very tempted to purchase some shares.

The main concern with Pepsi is that there's been a bigger push towards health concerns over their cola and snacks business.  Over the last 10-15 years, there's been declining demand for carbonated drinks and junk food.  If this trend continues then Pepsi could see declines in the the company.  However, in 2010 they started an initiative to increase "good for you" products to $30 billion annually from $10 billion over the next decade.  There's still plenty of recognizable brands under Pepsi's control so they should do just fine.  How they manage the switch to a more health conscious consumer will determine how fast they can grow in the future.

What do you think about PepsiCo. as a DG investment?  How do you think the long-term dividend growth prospects are?
Email Post
Labels: stock analysis