While cash flow is more important when it comes to financial independence, it's still good to look at the balance sheet too, which is why I provide these net worth updates.  Since more and more of my net worth is tied to the markets, there's a larger correlation between my net worth and the markets but in the long run as I continue to save and invest the net worth trend should be higher even though short term fluctuations can vary wildly.  As a dividend growth investor I'm not overly concerned with the short-term gyrations as long as the dividend stream remains in tact, but the markets' effect is noticeable.  Things have changed quite a bit since my last update covering June of this year.  The markets have moved lower which unfortunately means that my net worth has moved lower as well since a large portion of my net worth is tied to fate of the markets.  While my portfolio and net worth have both declined it's important to focus on what dividend growth investing is all about: dividends and the growth of them.  Dividends continue to roll into my portfolio and so far during September I've received FIVE dividend increases with two more expected to be announced.  That's how you win with dividend growth investing!  During August my net worth declined $20,275.05.

Despite the decline in net worth I'm still currently at $400k+ which is pretty encouraging considering I haven't really worked much this year due to the issues with our son.  However, it's back to the grind now and while I'm not really looking forward to working regularly because there's many days where I don't want to do anything, the positive thing is that it means there will once more be an income coming in.  And with an income coming in that means I can start saving and investing again instead of running a deficit in most months.  Year to date my net worth has decreased $11,268.45, -2.70%, due to the markets being uncooperative and the aforementioned lack of income/savings.

Moving forward though I expect to start being able to make 1-2 purchases per month while simultaneously building up some cash reserves.  I don't think the fact that the oil field has been brutal over the past year and since that's where I generate my income it's probably a good idea to rebuild up some cash before investing heavily.  My goal is to hopefully start investing more around the end of this year or sometime during the first quarter of 2016.

I don't see the point in paying extra on the mortgage given our relatively low interest rate and think we'll come out much further ahead investing the extra cash flow.  So the liabilities side of the net worth equation will be slow moving.  However, once the FI portfolio is able to get to a self-sustaining level of dividends then I'll aggressively pay down the mortgage.  As of the end of August we have 22.42% equity in our house.  Also, according to Zillow our house has increased just over $14k in value from our purchase price although I'm just using our purchase price in my net worth calculations.

I haven't set any goals yet, and probably won't, for my net worth because there's just too much in flux with our financial house to be able to come up with reasonable goals.  The net worth goal has always been a secondary goal since a lot of it is out of my control since I invest primarily in the stock market.  I'll just continue to focus on what I can control which is maintaining a high savings rate and investing in high quality companies at fair prices. 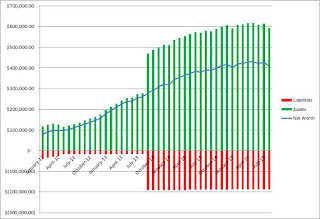 There's no after-tax savings rate for August since I spent more than I had in income.  So there was a negative savings rate throughout the month which certainly didn't help out my net worth.  However, through dividends and interest alone I was able to cover 18.8% of my expenses for the month.  Nothing spectacular but it's a solid mark on my path to financial independence.

Based on my expenses from August, my liquid savings would last for 7.55 years, a solid 0.64 year increase from June.  All of the improvement came thanks to a reduction in expenses from over $2.4k in June to just under $2.2k for August.

How did your net worth fare in August?  Were you able to counter the market moves with savings?