The common belief is that you should just park your money in index mutual funds and annually rebalance. While I believe that's probably good for anyone that doesn't want to take the time to select their own investments, if you are so inclined I'm going to show you how you can save yourself some extra money and end up with a bigger nest egg in the future.

These numbers will work as long as you are comparing the same accounts. I've assumed that you have a $30,000 initial investment amount and that you will contribute an extra $5,000 annually on January 1 of the year and make all mutual fund purchases or 2 invidividual stock purchases. Expenses for the mutual fund are assumed to be taken out at the end of the year with an expense ratio of 0.30% and the commission for the brokerage account is taken out at the time of the purchases. Commission costs are assumed to be $7.95 which is the amount that I pay, although there are cheaper alternatives. I've assumed that all mutual funds are no-load funds since that would be the best way to go, loads would obviously affect the final numbers. The initial $30,000 investment in the brokerage account is split between 4 purchases. The annual return for the calculations is 7%. Below are the results.


Your total expenses are significantly reduced by using a DIY approach and hand selecting stocks high quality stocks. Out of the $175,000 that you invested of your own hard-earned money by using mutual funds you'll pay $22,315.42 in total expenses. While that number sounds like a lot by itself looking at the percentage amount is even more shocking. Over the investing time horizon you would have contributed $175,000 of your money. With the DIY brokerage account you would pay a total of $492.90 in commission charges or 0.28% of your invested capital. The mutual funds would be $22,808.32 or 13.03% of your capital. The biggest drawback to mutual funds is that they will eat away extra capital that could be compounding. By losing that money your nest egg would be $44,374.07 less than the brokerage account. 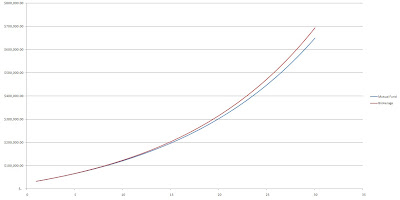 This is why I've decided to go the brokerage account route. I currently still have some mutual funds in my Rollover IRA mainly because I haven't researched the process of swapping my account over and I don't normally have cell service where I work and errands are the last thing that I want to do whenever I get the chance to be home.
Email Post
Labels: calculations compound interest expenses return