I ran Harris Corporation (HRS) through my screening process to see where it currently stands. HRS closed on Wednesday 4/11/12 at $43.81.

Harris Corporation, together with its subsidiaries, operates as a communications and information technology company that serves government and commercial markets worldwide. It operates in three segments: RF Communications, Integrated Network Solutions, and Government Communications Systems.

Analysts expect HRS to be able to grow at 2.20% per year for the next five years and I've assumed they can continue to grow at 1.50% per year thereafter. Running these numbers through a DCF analysis with a 10% discount rate yields a fair value price of $52.17. This means that at $43.81 the shares are undervalued by 16%.

Over the last 12 months, HRS's EPS are $4.32 and it's current book value per share is $19.92. The Graham Number is calculated to be $44.00 which means that at $43.81 the shares are fairly valued. This is interesting because it is fairly hard to pass the Graham Number calculation and come out undervalued.

HRS's average high dividend yield for the past 10 years is 1.66% and for the past 5 years is 2.19%. I think both of these are a little inflated since it wasn't until recently that HRS truly became a high dividend growth stock. Nevertheless, I would use the 5 year rate of 2.19% rather than the 10 year rate. This would give a value of $60.16. Therefore shares are undervalued by approximately 27%. If you calculate based off a 2.50% high dividend yield you get a value of $52.80 meaning the shares are undervalued by approximately 17%.

HRS's average low PE ratio for the past 10 year is 16.30. This would correspond to a price per share of $83.62 which would be undervalued by approximately 47%.

HRS's gross margin for FY 2010/2011 and FY 2009/2010 were 35.68% and 35.95% respectively. The gross margin is a little low for where I traditionally would like to see it but it is at least remaining flat and not falling which is good to see. They're net income margin for the same years were 9.92% and 10.79% respectively. I like the net income margin to be at least 10% but for it's last fiscal year is was fairly close by finishing with a 9.92% rate. The cash-to-debt ratio for the same years were 0.19 and 0.39. Both of these are way below what I like to see and it's moving in the wrong direction too. I would definitely monitor this situation very closely.

Harris's share outstanding had been relatively flat from 2001 to 2006. Since then that have initiated a share buyback program that has significantly reduced the share outstanding as can been seen in the following chart. 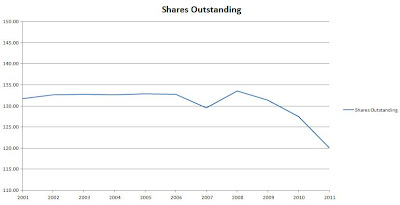 HRS's dividend growth rate for has been on a pretty remarkable tear. It's growth rates for the past 1 year, 3 year, 5 year and 10 year are 12.8%, 14.8%, 22.8% and 26.6% respectively. That kind of growth can build up a significant income stream down the line. The best part about it is that the payout ratio has remained relatively low despite the large increases as you can see in the following chart. 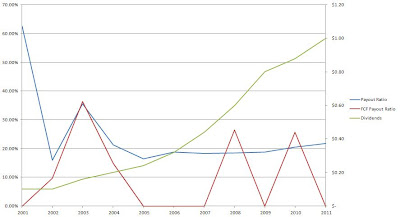 However, it's FCF and FCF payout ratio worry me. In 6 of the previous 11 fiscal years their FCF per share has been a negative number.

Harris's ROE and ROCI had been increasing up until the last 3 years. I would like to see the latest numbers to see how they've fared in relation to the trend of the past 3 years. 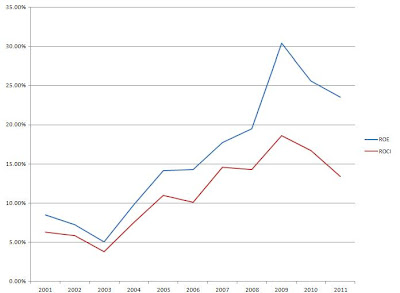 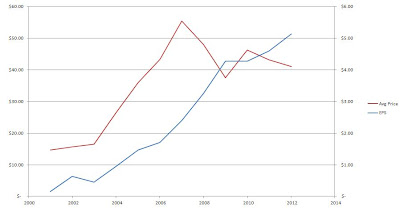 As you can see Harris's average price and EPS tracked fairly closely between 2001 and 2007. Since 2010 the EPS and Price have been moving in opposite directions. While EPS has been increasing the price has been decreasing. This is a positive sign for an undervalued stock. 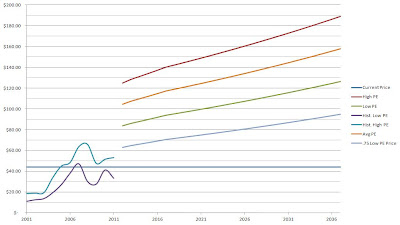 The chart shows the historical prices for the previous 10 years and the forecast based on the average PE ratios and the expected EPS values. I have also included a forecast based off a PE ratio that is only 75% of the average low PE ratio for the previous 10 years. I like to the look to buy at the 75% Low PE price or lower to provide for additional margin of safety. Currently Harris is trading $18.91 lower than this value.

The average of all the valuation models gives a value of $53.42 which means that Harris is currently trading at almost an 18% discount to the fair value.

Overall I think that Harris is undervalued at the current prices but given the question marks surrounding government spending I would proceed with caution upon starting a position. I would probably by a quarter of the way into the position and then wait for a 5% drop in price and make another quarter purchase. If you can get at least a 3.00% YOC, which is about where Harris is currently at, then I would start making my entry. I think for the time being Harris is a buy and monitor very closely stock, especially with the upcoming election playing a big role in the amount the government will be allocating to defense spending. Things should turn out right but the low growth rates scare me a bit.
Email Post
Labels: stock analysis