I ran Medtronic (MDT) through my screening process to see where it currently stands. MDT closed on Friday 4/20/12 at $37.61.

Analysts expect MDT to be able to grow earnings at 6.35% per year for the next five years and I've assumed they can continue to grow at 3.00% per year thereafter. Running these numbers through a DCF analysis with a 10% discount rate yields a fair value price of $56.26. This means that at $37.61 the shares are undervalued by 33%.

MDT's average high dividend yield for the past 10 years is 1.48% and for the past 5 years is 2.09%. Using the 5 year rate, MDT's fair value price would be $46.44 and the 10 year rate would give a price of $65.62. Therefore shares are undervalued by approximately 19% and 43%, respectively. I think that a 3.00% high yield is where Medtronic will settle into for the future barring a major growth catalyst for the company. Calculating the price off a 3.00% high yield would be $32.33 meaning it's overvalued by 16%. The following chart shows the historical high and low dividend yield as well as the current yield for the years 2001 to 2012. 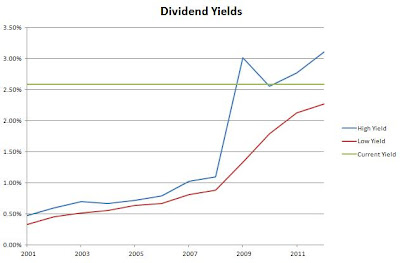 MDT is currently trading at a P/S of 2.47. Ideally you want it to be closer to 1 or less than 1. Less than 1 is a great bargain but is going to be hard to find for large well-followed companies. Historically, MDT has traded at a 5 year average P/S of 2.44 and and 10 year average P/S of 3.85. The target price based on the 5 year P/S is $37.13 and the 10 year is $58.72. The 5 year seems like a more reasonable ratio to expect since MDT's forecast revenue growth is fairly low. On the 5 year target price shares are currently trading at fair value.

For the DDM I assumed that Medtronic will be able to grow dividends for the next 5 years at the minimum of 15% or the lowest of the 1, 3, 5 or 10 year growth rates. In this case that would be 9.76%. After that I assumed MDT can continue to raise dividends at the rate of long term earnings growth, 3.00%, and used a discount rate of 7.5%. Based on this MDT is worth $26.20 meaning it's overvalued by 44%. I am fairly conservative in my DDM valuation by assuming they can only continue to grow at the elevated rate for 5 years, personally I feel that you will see a slightly higher 5 year growth rate over a longer period but being conservative in your assumptions allows room for errors. These calculations also assume there would be no expansion in the payout ratio which would allow for a higher dividend growth rate.

MDT's shares outstanding have been falling thanks to a significant buyback program.. 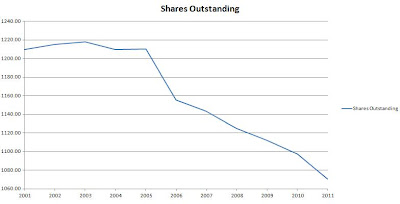 MDT's dividend growth rate has had a great run thus far in the 2000's. Its growth rates for the past 1 year, 3 year, 5 year and 10 year are 8.7%, 14.4%, 17.8% and 15.8% respectively. Medtronic has increased dividends for 34 years now. The payout ratio has been fairly stable around the 27% mark which is very encouraging since it would allow for expansion of the payout ratio to boost their dividend growth rates is earnings growth stalls. 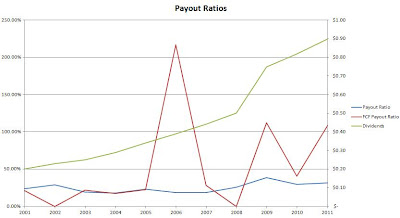 Return on Equity and Return on Capital: Invested

MDT's ROE and ROCI have fluctuated quite a bit since 2001. Their ROE seems to be around a minimum 22%. The ROCI has been trending downwards since 2001 which is troubling. Hopefully they can start to make progress on that front. 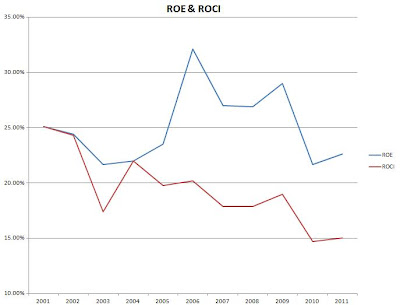 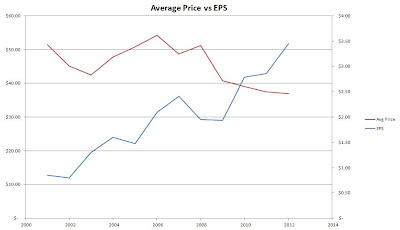 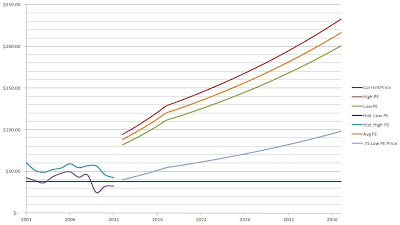 The chart shows the historical high and low prices since 2001 and the forecast based on the average PE ratios and the expected EPS values. I have also included a forecast based off a PE ratio that is only 75% of the minimum average low PE ratio for the previous 5 years or 10 years or 16. I have changed it to this calculation and will probably keep it so in the future because many of the companies that I've looked at so far had outrageous PE multiples in the early 2000's which skew the average PE ratio higher. I like to the look to buy at the 75% Low PE price or lower to provide for additional margin of safety. Currently Medtronic is trading $2.31 less than this value.

The average of all the valuation models gives a value of $47.72 which means that MDT is currently trading at a 21% discount to the fair value. Overall I think that MDT is undervalued at today's prices, but as with most companies there are some issues I'd like to see management make some progress on.

While I do like the growth prospects with an aging population here in the US and most developed countries, the most promising thing from a dividend growth perspective is that Medtronic has been able to grow their dividends at a high rate while keeping the payout ratio around 28%. With a low current payout ratio management can continue to increase dividends at an elevated rate despite lower earnings growth.
Email Post