Last week was a slow week for the blog because work was really busy, so I figured I'd give y'all another stock analysis. This time I decided to take a look at Emerson Electric Company (EMR). Emerson closed on Friday 5/25/12 at $47.28.

Analysts expect Emerson to grow earnings 11.32% per year for the next five years and I've assumed they can continue to grow at 3.00% per year thereafter. Running these numbers through a DCF analysis with a 10% discount rate yields a fair value price of $70.40. This means that at $47.28 the shares are undervalued by 33%. 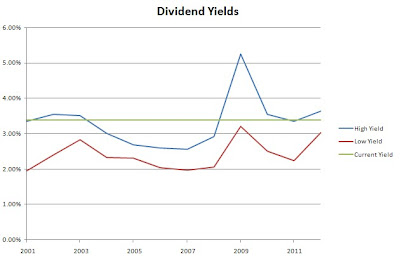 For the DDM I assumed that Emerson will be able to grow dividends for the next 5 years at the minimum of 15% or the lowest of the 1, 3, 5 or 10 year growth rates. In this case that would be 6.62%. After that I assumed EMR can continue to raise dividends by 3.50% annually and used a discount rate of 7.5%. Based on this EMR is worth $40.33 meaning it's overvalued by 17%. While I think that Emerson can continue to increase it's dividend by more than 3% per year after 5 years it's a good estimate to use to give a conservative valuation price. I also feel that you will see a higher dividend growth rate for the next 10 years than a 6.62% rate.

Emerson's gross margin for FY 2009/10 and FY 2010/11 were 39.57% and 39.46% respectively. Their gross margin is very high at ~40% and consistent too. I like to see both a steady gross margin and around 40%. Their net income margin for the same years were 10.29% and 10.24% respectively. I like the net income margin to be at least 10% and preferably rising. Emerson is doing great on the net profit margin with a consistent 10%. The cash-to-debt ratio for the same years were 0.35 and 0.47. Emerson's cash-to-debt ratio is a little low for my liking but it is improving. If they can continue to make progress on getting it closer to 1.00 that would be icing on the cake.

EMR has bought back an average of 1.40% of their shares outstanding annually since 2003. 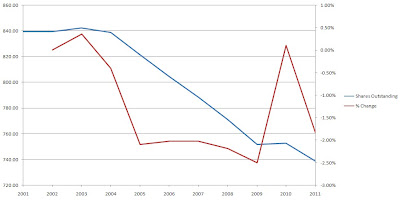 Emerson is a dividend champion with 55 consectutive years of dividend increases. Their average increase has been for the last 1, 3, 5 and 10 years 15.94%, 6.62%, 8.79% and 7.45%. While they have been increasing their dividend at a significant rate the best part is that their payout ratio has been falling from 64% in 2001 to 42% in 2011. This is good news for dividend growth investors since it is allowing more room for further expansion of the dividend and leaves a cushion should earnings take a hit due to another economic downturn. 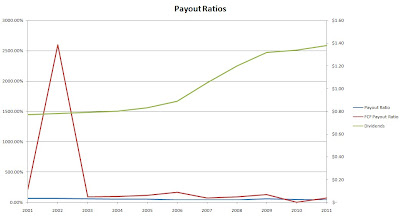 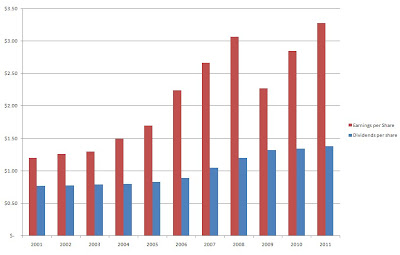 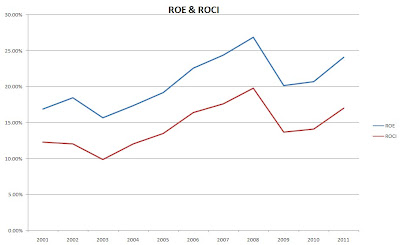 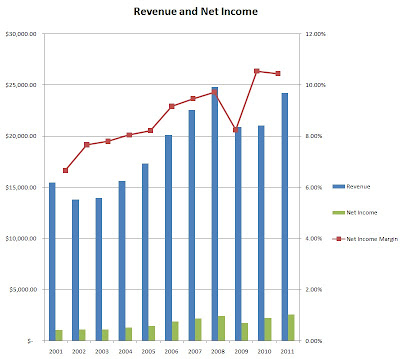 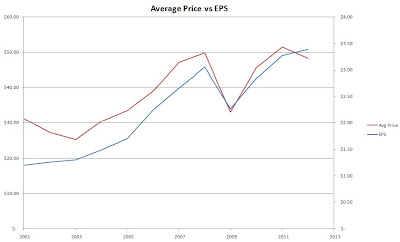 Emerson's average share price has tracked their EPS growth fairly well since 2001. It appears that the price is lagging the EPS trend since FY 2010/11 ended. This could be a good sign for capital appreciation as well as a solid dividend yield. 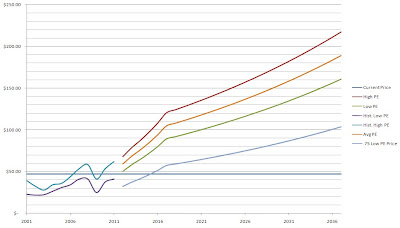 The chart shows the historical prices for the previous 10 years and the forecast based on the average PE ratios and the expected EPS values. I have also included a forecast based off a PE ratio that is only 75% of the average low PE ratio for the previous 5 years, 10 years or 16 whichever is least. I like to the look to buy at the 75% Low PE price or lower to provide for additional margin of safety. In this case the target PE is 9.5 which in my opinion is too low for Emerson to sell for. Currently Emerson is trading at a $14.99 premium to the forecast entry price. The entry price based on the average PE10 is $58.95 which means it's selling at a $11.67 discount.

The average of all the valuation models gives a fair value of $53.28 which means that Emerson is currently trading at a 11% discount to the fair value.

At the current levels I think you can get good value but there is definitely more to be had. With a current yield of 3.38% I would initiate a position but would be scaling in further on future pullbacks. A 3.50% yield would correspond to a $45.71 price. That would be a further pullback of 3.3%. With Europe rearing it's ugly head again this summer, volatility is sure to spike and the 3.50% target might come up, and who knows we just might breach the 4.00% yield as well.
Email Post
Labels: stock analysis