It's about time for another stock analysis. This time I decided to take a look atGeneral Mills (GIS). General Mills closed on Wednesday 5/9/12 at $38.91.

Analysts expect General Mills to grow earnings 7.15% per year for the next five years and I've assumed they can continue to grow at 3.00% per year thereafter. Running these numbers through a DCF analysis with a 10% discount rate yields a fair value price of $43.43. This means that at $38.91 the shares are undervalued by 10%. 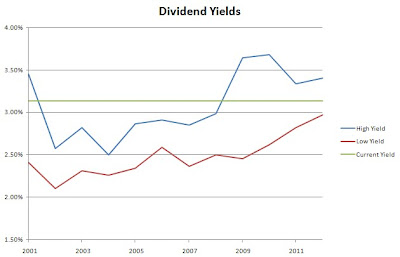 GIS's gross margin for FY 2009/10 and FY 2010/11 were 39.63% and 40.01% respectively. Their gross margin is very high at ~40% and consitent too. I like to see both of those when looking at potential dividend growth stocks since it means they have pricing power. Their net income margin for the same years were 10.46% and 12.09% respectively. I like the net income margin to be at least 10% and preferably rising. General Mills passes both of my criteria for net income margin. The cash-to-debt ratio for the same years were 0.13 and 0.11. Their cash-to-debt ratio is the only thing really lacking on the fundamentals front.

GIS's shares outstanding have been fairly steady without significant changes up or down. 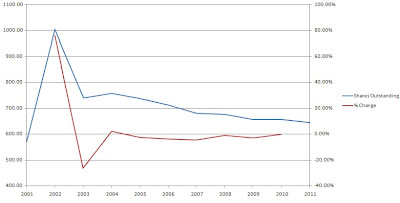 General Mills is a dividend contender with 8 consectutive years of dividend increases. They're average increase has been fairly steady averaging for the last 1, 3, 5 and 10 years 8.93%, 12.36%, 11.12%, 8.29%. It seems that a culture of increasing dividends has been formed with upper management which is good to see. While the dividends have been increasing their annual payout ratios have been pretty consistent since 2003. Their low payout ratio has been 39.86% and the high payout ratio was 46.21% with an average of 43.20% since 2003. I would like it to be lower but the fact that the payout ratio has been steady despite increases in the dividend is a good sign. 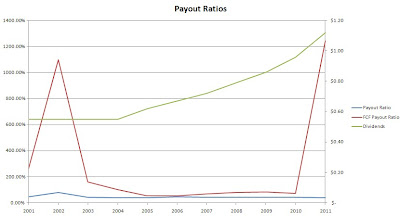 GIS's ROE and ROCI have been trending upwards since 2002. I like to see a stable or increasing value for both. This means that management has done a better job with their investments. 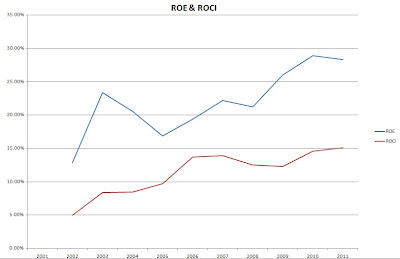 General Mill's gross profit margin has averaged 42.48% since 2002 has hasn't seen any big changes either way. Their net profit margin, percentage of every dollar of sales they get to keep, has been ticking up slightly the last few years. Since 2002 it's averaged 9.44% and has increased to 10.30% and 12.10% for the last 2 fiscal years. A stable or increasing profit margin is good to see since it means that the company is improving it's efficiency and getting to keep more of every dollar they bring in. 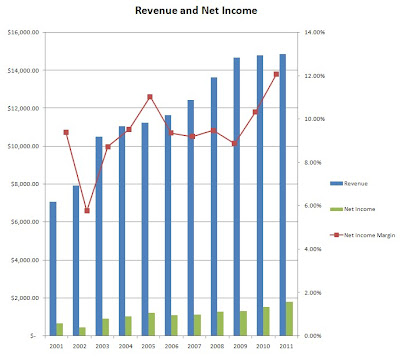 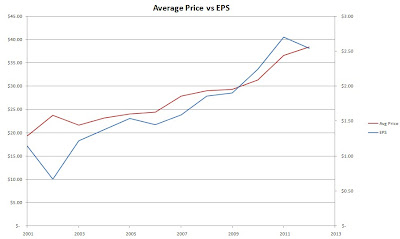 GIS's average share price has tracked their EPS fairly closely since 2001. This means that their PE ratio has been fairly consistent in that time period. The values are based solely off the average high and low prices for the fiscal year meaning that it doesn't truly show the value opportunities that are present throughout the time period. 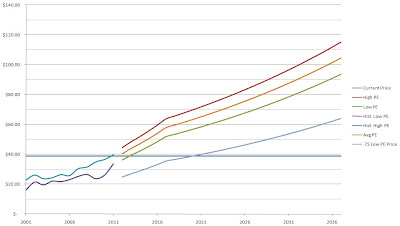 The chart shows the historical prices for the previous 10 years and the forecast based on the average PE ratios and the expected EPS values. I have also included a forecast based off a PE ratio that is only 75% of the average low PE ratio for the previous 10 years. I like to the look to buy at the 75% Low PE price or lower to provide for additional margin of safety. Currently General Mills is trading at a $14 premium to the forecast entry price.

The average of all the valuation models gives a value of $36.42 which means that General Mills is currently trading at a 7% premium to the fair value.

Overall I think that GIS is fairly valued at today's prices. I think if you can get into General Mills with a 3.50% YOC it might be tempting to take a chance on. That would mean a cost basis of $34.86. This would only give you a margin of safety of 4% based on the average of the valuations, but could still prove to be a solid entry target if the dividend growth can continue along it's recent past. I would probably look to sell puts if the premiums can give at least a 10% annual yield. That way my entry price is guaranteed and I would still earn a 10% CAGR on my cash.
Email Post
Labels: stock analysis