After seeing a few articles about Mattel after selling off due to a weak 1st quarter, which is fairly typical seeing as how they sell toys and after the Christmas season spending is usually light, I decided to run Mattel (MAT) through my screening process to see where it currently stands. Mattel closed on Wednesday 5/2/12 at $33.88.

Analysts expect Mattel to be able to grow earnings 9.05% per year for the next five years and I've assumed they can continue to grow at 3.00% per year thereafter. Running these numbers through a DCF analysis with a 10% discount rate yields a fair value price of $43.94. This means that at $33.88 the shares are undervalued by 22.89%.

MAT's average high dividend yield for the past 10 years is 4.51% and for the past 5 years is 5.24%. We'll use the 5 year yield since Mattel has grown their dividends for the past 4 years. This gives a target price of $23.65 meaning Mattel is overvalued by 43.24%. The following chart shows the historical high and low dividend yield as well as the current yield. 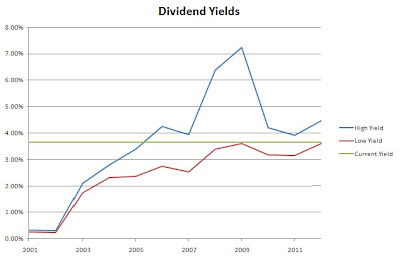 MAT's gross margin for FY 2010 and FY 2011 were 50.46% and 50.20% respectively. Their gross margin is very high at 50% and consitent too. I like to see both of those when looking at potential dividend growth stocks since it means they have pricing power. Their net income margin for the same years were 11.69% and 12.26% respectively. I like the net income margin to be at least 10% and preferably rising. MAT passes both of my criteria for net income margin. The cash-to-debt ratio for the same years were 1.35 and 0.91. I much would much rather see Mattel get their cash-to-debt ratio back to at least even but at 0.91 it's still manageable.

MAT's shares outstanding have been falling thanks to their share buyback program. 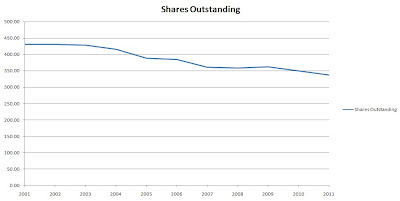 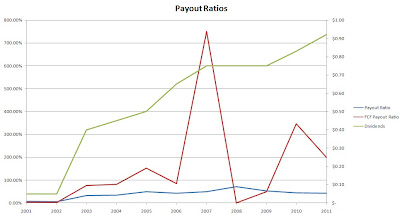 Return on Equity and Return on Capital: Invested

MAT's ROE and ROCI have been relatively consistent and generally trending upwards since 2001. I like to see a stable or increasing value for both. 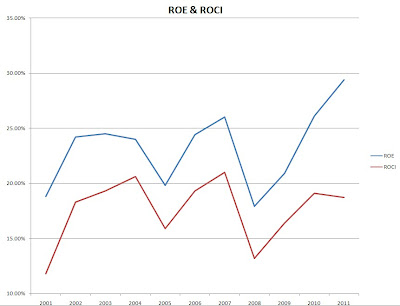 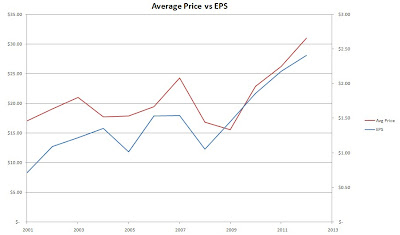 MAT's average share price has tracked their EPS almost perfectly in terms of growth rate since 2008. This means that their PE ratio has been fairly consistent in that time period. 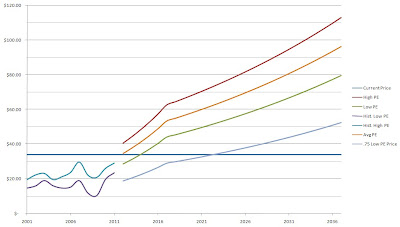 The chart shows the historical prices for the previous 10 years and the forecast based on the average PE ratios and the expected EPS values. I have also included a forecast based off a PE ratio that is only 75% of the average low PE ratio for the previous 10 years. I like to the look to buy at the 75% Low PE price or lower to provide for additional margin of safety. Currently Mattel is trading at a $15 premium to the forecast.

The average of all the valuation models gives a value of $31.52 which means that MAT is currently trading at a 7.50% premium to the fair value.

Overall I think that MAT is slightly overvalued at today's prices. If you can get into Mattel with a 4.00% YOC it might be tempting to take a chance on. That would mean a cost basis of $31.00 even. This wouldn't give you a good margin of safety but could still prove to be a solid beginning point. However do keep in mind that this might not be a great dividend growth stock due to their past inconsistencies in raising the dividend. But every company started at one point having just 4 years of consistent dividend growth. I would definitely want to check in on their latest earnings call to see what management had to say.
Email Post
Labels: stock analysis