While cash flow is more important when it comes to financial independence, it's still good to look at the balance sheet too, which is why I provide these net worth updates.  The S&P 500 was up almost 4.5% in October which helped to lift most of the stocks I own as well.  Thanks to the markets and great savings from my income, I almost matched September's net worth increase but ended up a little short.  No real complaints though from me as I had just over a $16,000 increase for the month.  I had a little over $1,440 in combined 401k contributions, $1,050 in ESPP withholdings, and over $8,400 in after tax savings from my income.  The rest of the change was due to market changes and dividends.

Honestly it's crazy to see the assets approaching $500k, especially considering we started the year at almost $173k.  It's not as impressive as I'd like as over $200k of that is due to our house, but even excluding the house it's pretty amazing.  We're now sitting on 20.10% equity in the house after making our first mortgage payment.  My net worth increased by an astounding $16,087.24 in October.  This was good for a 5.78% increase from August.  I've already passed my original $100k net worth increase goal for the year and now I've officially passed the revised goal to reach a $286,000 net worth by the end of 2013.  In my 3rd quarter goal update I revised the net worth goal again to $306,000 by the end of the year which would give me a $150k increase for the year.  The markets have played a big part in that but all I can do is make sure I control my savings rate and invest at opportune times.  I'm about $12,000 short for now so maybe I should have shot a little bit higher on that revised goal.  My budget is continues to be in flux for the next month or two as the new expenses start rolling in and I figure out what all I've missed in my planning. 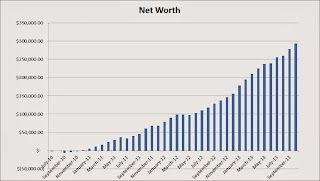 My after-tax savings rate for October ended up at 81.04% which is great but was a bit disappointing as I had my third highest monthly income and expected to get closer to 83-85%.  Most of that is due to the income being so high, but there's plenty of people with high incomes that aren't aggressively saving.  I'm now averaging 82.71% through the October which is currently ahead of my 80%+ savings rate goal.  This is only savings from my net income that actually hits my checking account.  However, I do have another 8% after tax being withheld to purchase shares through the employee stock purchase plan provided by my employer.  I'm expecting a dip in my savings rate for the rest of this year due to the added expenses for the house so the 80%+ level might be in jeopardy.  Even if it dips down to the 70% range on a monthly basis I'll still be doing just fine as that's well above what most Americans are saving. 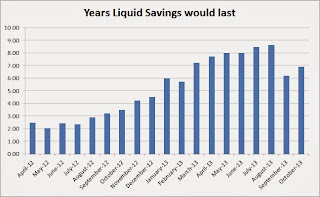 My non-retirement accounts net worth could took increased after a dip in September.  Based on my expenses from October my liquid savings would last for over 6.88 years, which is a 0.70 year increase from September.  Going forward I wouldn't be surprised to see a further dip in this number as expenses are still in flux but over the long-term it will start to trend higher once again.

How was your October?  Did you do better or worse than you expected this month?
Email Post
Labels: net worth