While cash flow is more important when it comes to financial independence, it's still good to look at the balance sheet too, which is why I provide these net worth updates.  Since more and more of my net worth is tied to the markets, there's a larger correlation between my net worth and the markets but in the long run as I continue to save and invest the net worth trend should be higher even though short term fluctuations can vary wildly.  As a dividend growth investor I'm not overly concerned with the short-term gyrations as long as the dividend stream remains in tact, but the markets' effect is noticeable.  Between my last update covering October 2014 through the end of the year my net worth increased $18,475.94!

November provided the bulk of the increase since the medical bills hadn't really started rolling in yet so all excess income was funneled to cash savings.  It's pretty cool to finally topple the $400k net worth level as well as crossing the $600k mark for the asset side.  I still find it hard to believe that in 53 months I went from a -$1,663.30 net worth all the way up to $400k+.  That's the beauty of what happens when you combine a high income with high savings and investing the difference.  Over the next few months the plan is to hoard cash, although I'll still probably make a few purchases for my portfolio, and then probably sometime between May and July I'll start investing heavily once again.  I don't see the point in paying extra on the mortgage given our relatively low interest rate and think we'll come out much further ahead investing the extra cash flow.  However, once the FI portfolio is able to get to a self-sustaining level of dividends then I'll aggressively pay down the mortgage.  As of the end of December we have 21.55% equity in our house.

My net worth at the end of December showed a 4.6% increase from October of $18,475.94.  For the year 2014 my net worth increased $97,798.60 or 30.6% from the end of 2013.  My goal for the year was for a $125k increase so I came up rather short but I can't really complain about almost a $100k increase.  The net worth goal has always been a secondary goal since a lot of it is out of my control since I invest primarily in the stock market, so I'm not too disappointed about the shortfall.  I'll just continue to focus on what I can control which is maintaining a high savings rate and investing in high quality companies at fair prices.

I've changed the chart for my net worth to better reflect our situation now that there's significant debt on the books with our mortgage.  The chart will now show both assets and liabilities as well as the net worth.  I also changed the colors because I didn't notice this until April but assets were red and liabilities were green.  So that's now been fixed. 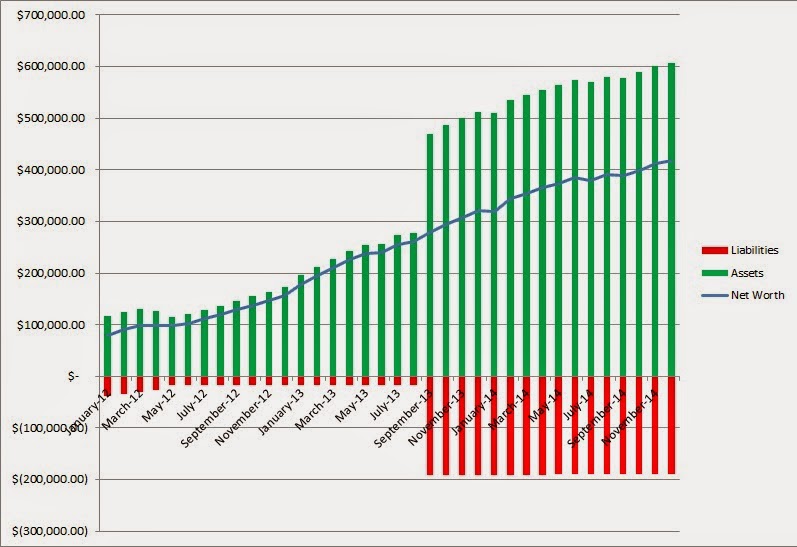 My after-tax savings rate will be a December came in at 67.56% which was the 4th highest mark I had throughout the year.  Considering the higher than normal expenses for the month I'm very pleased with how that turned out.  My average for the year came to 62.25% which was just short of my 65% goal but showed marked improvement from the starting point in the low 50% range.

Based on my expenses from December, my liquid savings would last for 6.24 years, a 0.17 year decrease from October.  Despite solid increase in my liquid assets that wasn't enough to overcome the rather large jump in expenses for December which lead to the decline.  I'm looking forward to later in 2015 when expenses should hopefully level out and there isn't as much that's in flux on that side of the income statement since that's the fuel for the balance sheet.

How did your net worth do for 2014?  Did you have more or less progress than you set out to make?
Email Post
Labels: net worth