Companies have a few options when it comes to creating shareholder value.  The most important is the ability to improve the underlying operations of the company through growth.  My favorite is through dividends and of course share buybacks are another option.  I want to ignore the dividends for the time being and focus on growth and share buybacks.

When a company is growing and able to buy back shares at a cheap valuation, shareholders win.  You benefit from both the underlying growth of the company and a lower share count.  That's the icing on top of the cake that can lead to out-sized returns over the long haul.   While a decreasing share count is excellent, you now own more of the same company, that's not the be all and end all when it comes to analyzing a share buyback program.

Let's take a look at one of my holdings, Visa. 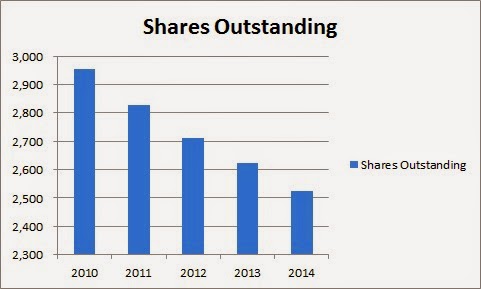 Just looking at the share count you can tell that Visa has been pretty aggressive in reducing the outstanding shares.  Since the end of FY 2010, Visa's share count has been reduced by a total of 14.61% or 3.87% per year.  That's a pretty impressive total considering it's just a four year stretch.

However, we also need to look at the share buyback in terms of the relationship between net income, earnings per share, and adjusted earnings per share.  The following table outlines how each metric has changed since the end of FY 2010.

Net income has grown at an impressive 16.36% per year over the time period.  Since Visa is growing and buying back shares, earnings per share growth has been supercharged and grown at a 21.05% annualized rate.

Looking at the cash flow statement we can see that Visa has spent a total of $12.217 billion on share buybacks.  That's shareholder equity value that has been used by management for shareholders.  So have they done a good job with that?  Dividing the $12.217 billion by the original share count of 2.956 billion gives a value of $4.13 per share of equity value used to reduce the share count.  If we subtract the adjusted earnings per share of $1.84 from the earnings per share of $2.15 we get the effect of the share buyback on earnings, in this case that's $0.31.  Management has effectively earned 7.62% on behalf of shareholders with the equity used to reduce share count.  That's a solid return but with a return on equity in the mid to high teens, maybe there's a better use of that capital.

What about another one of my holdings and a buyback king, IBM?

IBM's share count has been reduced by 21.52% since FY 2010 or 5.88% per year.  Net income has declined by 5.12% per year but earnings per share have increased by 0.81%.  Management has spent $48.803 billion on share buybacks or $37.92 per share worth of equity.  With all of that capital that IBM has used to retire shares they've earned a 6.75% return.  That's not bad, but for a company that is having issues growing the actual net income I could think of better uses for that capital.  Specifically reinvesting in the business or even higher dividends.  That's the downside to looking at just the earnings per share numbers without also looking at the net income figures.  In IBM's case, net income has decreased by over 5% per year but the headline earnings per share number has shown a modest improvement.  The buyback has helped to mask some of the issues with IBM's transition away from a hardware company.

One last company I want to look at is Pepsico.

Pepsi's share count has been reduced by 5.39% total since the end of FY 2010 which is good for a 1.38% annual decrease.  Net income has been pretty stagnant with just 0.75% annualized growth but the headline earnings per share number increased 2.16% per year.  You can see that through the share buyback program Pepsico was able to increase earnings per share by $0.23 in FY 2014 compared to the adjusted earnings per share number of $4.04.  Management spent $13.721 billion dollars to retire those shares or $8.50 per share in equity value.  Management has effectively been able to earn $0.23 / $8.50 = 2.70% on the capital used for buybacks.

When a company decides to use shareholder funds to buy back shares there's an inherent trust that the company feels the stock price has the company undervalued.  If that's the case then the shareholders that stay the course win because the company is buying back shares when they're cheap and get the added boost to earnings per share.  But it's important to not take the headline numbers of earnings per share or reduced share count lightly.  A little further analysis can reveal quite a bit about whether management is using your capital prudently.

Have you ever looked at the value of the share buyback programs for the companies you own?  Any companies that you know of that have been doing an excellent job with share buybacks?
Email Post
Labels: stock valuation method