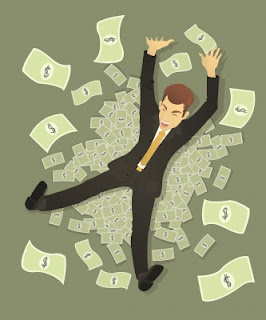 The S&P 500 was essentially flat for April adding just 0.3%.  Since the majority of my net worth is tied to the performance of the markets that means the bulk of the changes for April came from cash infusions in the form of a tax refund, over $300 in dividends across all my accounts and savings from my income.  Receiving 9 different pay raises during April was a nice bonus in an otherwise slow month for my investments.

April had a surprisingly solid result considering our income was a bit lower than we expected and we took a trip to Nashville at the end of the month which raised our expenses up.  Year to date our net worth has risen over $53,000 which is absolutely fantastic.  Although I don't think we can repeat that kind of performance since I was laid off at the end of April and we also had a nice $30k boost to our cash reserves from a back pay settlement.  For the month our net worth had a 3.2% rise compared to the end of March and year to date its risen 12.9%.

As I mentioned earlier I was laid off at the end of April so there's lots of changes on the horizon.  Due to the loss of one of our incomes we're still in cash conservation mode so you won't be seeing much progress on debt reduction or investing which is a bummer.  Luckily though I'll be rolling my 401k over to an IRA soon which will provide over $100k of fresh capital to deploy which will keep me busy.

At this time I don't see the point in paying extra on the mortgage at this time given our relatively low interest rate as well as the tax break on mortgage payments and think we'll come out much further ahead investing the extra cash flow.  So the liabilities side of the net worth equation will be slow moving.  However, once the FI portfolio is able to get to a self-sustaining level of dividends then I'll plan to aggressively pay down the mortgage. 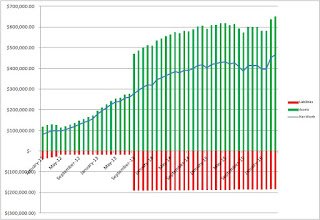 Truly passive income, dividends and interest, totaled to $284.25 during April which was a slight decline compared to January's total of $285.16.  Adding in the gross income earned from blogging/writing added another $161.84 to the monthly non-day job income total.  That's a total of $446.09 of income that's not related to a regular 9-5 job.  We've still got a long ways to go to reach our goal of financial independence, but we're heading in the right direction.

How did your net worth fare in April?