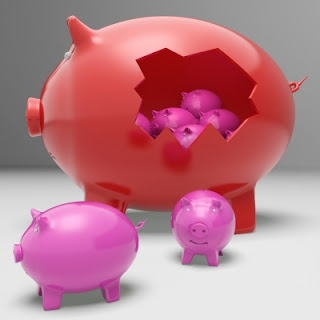 It's the end of one month and the beginning of another so it's time for my favorite update: my dividend update.  These dividend updates reflect all dividends that I receive through my investing pursuits. I hope they can help inspire you to take control of your own finances and invest to build a passive income stream. What you use that stream for is up to you, whether it's to fund early retirement, just provide some FI/FU money, or even to provide for an annual vacation; the key is that it can provide options and open up all sorts of possibilities. You can check my dividend income or progress pages to see what dedication to an investment plan can give you.

The first month of the quarter is always a bit of a let down when compared to the end of the quarter dividend payouts.  But cash is cash and I won't complain about receiving more no matter the month it comes in.  I received a total of $267.50 in dividends from my FI Portfolio during the month.  I also received $7.26 in dividends from my Loyal3 portfolio bringing my taxable accounts dividend total to $274.76.  My Roth IRA also provided $23.34 in dividends throughout the month.  Across all 3 accounts, excluding the effect of taxes, April's dividends totaled $298.10.

Looking at the dividend totals on the surface April's results were a bit uninspiring.  Compared to January 2016 my dividends showed a 0.4% decline and the year ago comparison is even uglier at a 16.5% decline.  Yikes!

Some of the discrepancy is due to the timing of payments such as Coca-Cola paying in April, but not January or Pepsico paying in January but not April and some is due to positions being closed such as W. P. Carey or Baxter International.

On a constant payout basis, i.e. the companies that paid and were owned during the same time period the quarterly comparison eeked out a 2.2% increase.  The adjusted year over year comparison showed a 5.3% increase.  This negates the effect of positions being closed or new positions being initiated, but does not account for any dividend reinvestment.  I'm quite happy with 5.3% organic dividend growth year over year although that is a bit lower than I'm targeting.

My Loyal3 Portfolio showed a disappointing 26.1% decrease compared to January, but a solid 8.2% increase year over year.  Luckily though the decrease was not due to sales or dividend cuts, but rather just due to the timing of payments since Disney (DIS), Pepsico (PEP) and Coca-Cola (KO) paid in one of the periods, but not both.  When accounting for just constant payouts, i.e. the companies that paid during both time periods, the quarterly comparison showed a small 2.6% increase.

My Roth IRA portfolio gives a purer view of dividend growth investing at work as I have not contributed capital to the portfolio since October 2012.  Since my dividends are small I opt to automatically reinvest dividends instead of pooling them with new capital.  From dividend increases and dividend reinvestment April's dividends showed a 16.3% decrease compared to January 2016 as well as a 10.2% decrease from the year ago period.

While the decreases are disappointing to see they are easily explained and are due to closing my position in Wal-Mart within my Roth IRA earlier this year.  Excluding the Wal-Mart payouts from the previous reference months moves the results to a much more flattering gain across both periods.  April's dividends showed a 1.0% increase compared to January 2016 and a 9.5% increase year over year when teasing out the Wal-Mart effects.

I've yet to put that capital to work because the markets started their big run before I could find a worth investment.

April was a busy month for dividend increase announcements, of course that's a busy that I like.  A total of 9 of my holdings announced raises to their cash payouts to me the shareholder.  You mean a company I own a piece of, albeit it, wants to pay out more of their profits to me just because I own part of the company?  Sign me up!  That's dividend growth investing at work!

The dividend boosts came from all sectors of the economy: 2 consumer staples giants, real estate, 2 technology companies, a banking giant, an oil supermajor, an industrial powerhouse and a health care giant.  Not bad if I do say so myself.  Combined the dividend increases added $41.92 to my forward 12-month dividends.

Below is the chart showing the monthly dividend totals for each year that I've been investing as well as the monthly average.  It's not always an increase as some companies have odd payout schedules and eventually some positions will get dropped, but the long-term trend is what matters.  The rolling 3-month average of my FI Portfolio is at $465.27.  That's about a $27 decrease from where my year to date average was at the end of 2015.

Are you off to a good start to the second quarter?
Email Post
Labels: dividend update financial independence