Analysts expect AT&T to grow 7.78% per year for the next 5 years and I've assumed that after that they will grow at 2.00%. Running those numbers through the DCF analysis with a 10% discount rate gives a value of $37.21. DCF valuation shows that AT&T is currently undervalued by 15.29%.

Walmart's TTM EPS is $0.67 with a BVPS of $17.81. Using the Graham Number calculation you get a value of $16.39. Using these numbers AT&T is overvalued by approximately 92%; however, the TTM EPS value is artificially low due to the failed buyout of T-Mobile. If you recalculate based off the forecast $2.35 EPS you get $30.69 meaning that AT&T is currently overvalued by approximately 2.71%.

AT&T's trailing PE is 47.04 and it's forward PE is 12.41. The trailing PE is so high due to the payout of the failed T-Mobile acquisition. The CAPE for the previous 10 years is 16.26 and taking out the trailing PE from that calculation gives an CAPE of 15.15.

AT&T's shares outstanding have increased every year since 2008. Most recently it increased another 1.97%.

The payout ratio has been fairly steady above the 70% mark. I would prefer that the payout ratio be lower to allow for larger increases but in AT&T's case I think it's prudent to allow a higher payout ratio. Once again, with AT&T your looking for either stability or high current yield not necessarily dividend growth. 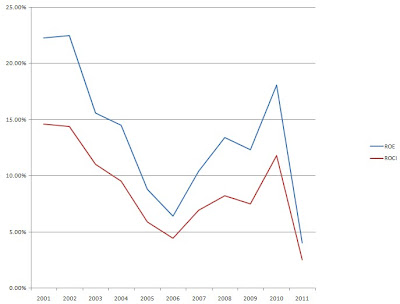 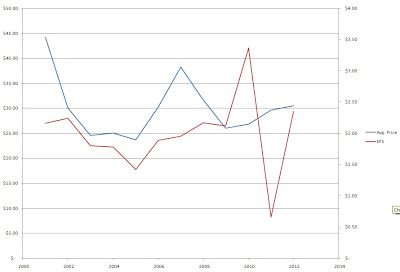 
The chart shows the historical prices for the previous 10 years and the forecast based on the average PE ratios and the expected EPS values. I have also included a forecast based off a PE ratio that is only 75% of the average low PE ratio for the previous 10 years. I like to the look to buy at the 75% Low PE price or lower to provide for additional margin of safety. Currently AT&T is trading only $5.25 higher than this value. 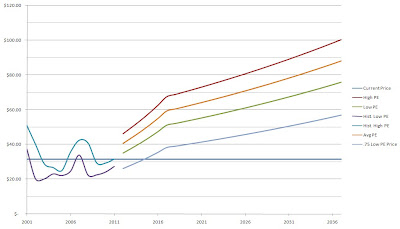 The average of all the valuation models gives a value of $32.47 which means that AT&T is currently trading at a 2.92% discount to the fair value.

Overall I think that AT&T is slightly overvalued at the current price. I would look to get at least a 6% entry yield which corresponds to a purchase price of $29.33. At that entry price you would begin your accumulation at a 16.5% discount to the average valuation. So in other words AT&T is not a stock I would be purchasing now and I would wait for the price to drop.

Selling puts would be one way to begin purchasing at a good margin of safety; however, the current put premiums would not meet my criteria unless you go out until at least July. And even then you would be looking at a only a 5.15% CAGR if the shares were not put to you.
Email Post
Labels: option strategy puts stock analysis