I ran Walmart through my screening process and was pretty intrigued by the results. Walmart is currently trading at $59.76.

Analysts expect Walmart to grow 9.10% per year for the next 5 years and I've assumed that after that they will grow at 1.5%. Running those numbers through the DCF analysis with a 10% discount rate gives a value of $72.46. DCF valuation shows that Walmart is currently undervalued by 17.5%.

Walmart's trailing PE is 13.22 and it's forward PE is 12.30. The CAPE for the previous 10 years is 21.54. I feel the CAPE is a little overstated once again thanks to the high valuations afforded Walmart's shares in the early 2000's.

I usually look for a higher gross and net margin but Walmart is in the low margin retail business. For these I'll compare them to the industry to see how they stack up against their competitors. Their gross margin is 3.8% higher than the industry and the net profit margin is 8.1% higher than the industry. Since Walmart doesn't pass my minimum margin amounts due to their business it's nice to see that they are well above their competition in a low margin business. I would like for the cash to debt ratio to be better than the current 0.15.

Over the past year Walmart was able to decrease the shares outstanding by 2.60%.

I don't normally look for a specific number but prefer to see fairly stable or increasing values for ROE and ROCI. The following graph shows Walmart's ROE and ROCI since 2001. 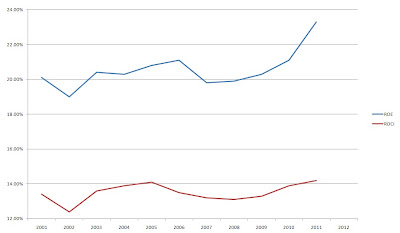 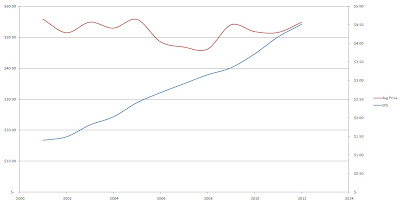 Due to the high valuation that Walmart had in the early 2000's the share price has been relatively flat to allow for the EPS to catch up to justify the valuation. 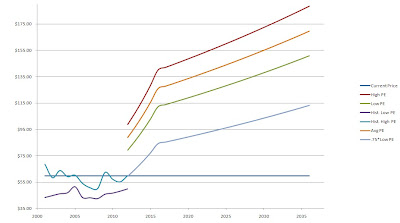 The chart shows the historical prices for the previous 10 years and the forecast based on the average PE ratios and the expected EPS values. I have also included a forecast based off a PE ratio that is only 75% of the average low PE ratio for the previous 10 years. I like to the look to buy at the 75% Low PE price or lower to provide for additional margin of safety. Currently Walmart is trading only $0.44 higher than this value.

The average of all the valuation models gives a value of $66.22 which means that Walmart is currently trading at a 9.7% discount to the fair value.

Overall I think that Walmart is on the border of hitting my entry criteria. I would probably start accumulating at any price below $59 and buy on the way down. A $59 entry price would start your position at an approximate 11% discount to the average fair value. The other option is to sell puts to guarantee a entry price that you seek. With Walmart being a large and stable company I'm not sure you could get adequate premium yield from the puts to make it worth tying your money up.
Email Post
Labels: stock analysis