It's time for another stock analysis report so I figured we'd look at clothing and apparel giant V.F. Corporation (VFC).  They are a dividend champion with 40 consecutive years of increasing their dividend.  VFC closed trading on Tuesday, January 29th at $147.00.

Analysts expect VFC to grow earnings 10.50% per year for the next five years and I've assumed they can continue to grow at 3.50% per year thereafter, right around the long term inflation rate. Running these numbers through a two stage DCF analysis with a 10% discount rate yields a fair value price of $201.59. This means that at $147.00 the shares are undervalued by 26.7%. 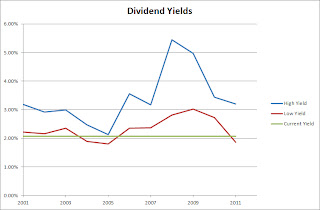 For the DDM, I assumed that VFC will be able to grow dividends for the next 5 years at the minimum of 15% or the lowest of the 1, 3, 5 or 10 year growth rates. In this case that would be the 5 year growth rate of 6.32%.  After that I assumed they can continue to raise dividends for in perpetuity at 3.50%.  The dividend growth rates are based off fiscal year payouts and don't necessarily correspond to quarter over quarter increases.  To calculate the value I used a discount rate of 10%. Based on this, VFC is worth $60.96 meaning it's overvalued by 142.3%.

VFC's gross margin for FY 2010 and FY 2011 were 49.0% and 47.9% respectively. They have averaged a 43.5% gross profit margin since 2001 with a low of 34.2% in FY 2001. Their net income margin for the same years were 7.4% and 9.4%.  Since 2001 their net income margin has averaged 7.4% with a low of 2.5% in FY 2001.  I typically like to see gross margins greater than 60% and at least higher than 40% with net income margins being 10% and at least 7%.  I'd like to see VFC improve on both the gross margin and net income margin with their upcoming annual report.  Of course each industry is different and allows for different margins, so let's see how VFC has done when compared to their industry.  For FY 2011, VFC captured 100.2% of the gross margin for the industry and 151.6% of the net income margin.  They're able to turn much more of their revenue into profit compared to their competitors while having the same gross margin.  Their cash-to-debt ratio for the same years were 0.85 and 0.19.  I prefer for companies I'm investing in to have very little debt on their books and to have a cash-to-debt ratio greater than 1.  This is the only real issue that I see with VFC.  I'll be interested to see how this turns out once they report their full year results for 2012. 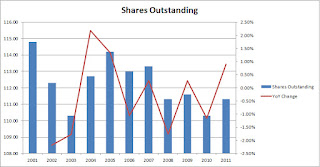 VFC is a dividend champion with 40 consecutive years of dividend increases.  Their current annual dividend sits at $3.48 for a current yield of 2.36%.  VFC's annual increases for the last 1, 3, 5 and 10 years has been 16.09%, 8.53%, 6.32% and 12.06%.  These numbers are different from the actual quarterly increases since they are based off the dividends paid out during each fiscal year.  For example, the latest increase was announced in October increasing the dividend 20.83% but since it's based off FY increases the 1 year growth is only 16.09%.  Their payout ratio has decreased over the years which is good to see.  In 2001 it sat at 78.2% and finished at 32.7% in 2011.  This is great news for investors since this gives the company more room to increase the dividend in the future without taxing the operations of the company. 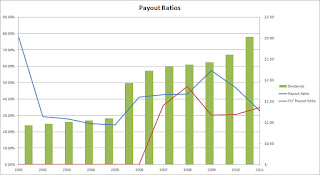 VFC's free cash flow per share has been great since 2007 with dividends only taking up an average of 36% of the available FCF.  This is great news for potential investors because it will allow the Board to continue to increase dividends while building up it's cash reserves for another potential buyout or to get them through another tough stretch of the economy. 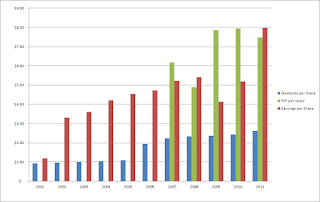 VFC's cash flow and free cash flow have are generally increasing.  I don't really like the LT debt increasing as much as it has but it's the nature of their business since they recently bought out Timberland in 2011.

Since the basis of dividend growth is revenue and net income growth, we'll now look at how VFC has done on that front.  Their revenue growth since 2002 has been decent at 7.14% per year and their net income has been growing at an 10.13% rate.  Since their net income has been growing faster than revenue, their net income margin has increased from 7.33% to 9.39% between FY 2002 and FY 2011.  This means that management has been able to get operations more efficient and they are able to keep more pennies from every dollar of sales to reinvest in the company or return to shareholders.  Revenue has been a little more cyclical due to the 2 recessions over the period, but it's great to see that their net income only decreased once, FY 2009, despite 3 year over year decreases in revenue. 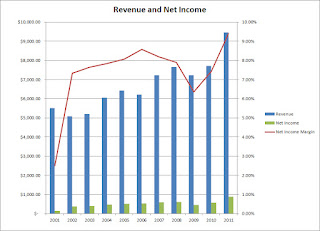 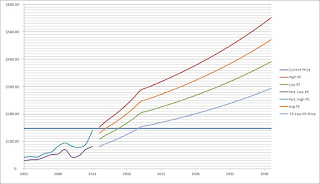 The chart shows the historical high and low prices since 2001 and the forecast based on the average PE ratios and the expected EPS values. I have also included a forecast based off a PE ratio that is only 75% of the average low PE ratio for the previous 5 years and 10 years whichever is least.  Since I think the 5 year average low PE of 11.28 is going to be more typical for VFC, I'll use that number.  I like to the look to buy at the 75% Low PE price or lower to provide for additional margin of safety. In this case the target low PE is 11.28 and the 0.75 * PE is 8.54.  This corresponds to a entry price of $92.80 based off the expected earnings for FY 2013 of $10.97.  Currently VFC is trading at a $54.89 premium to the 75% low PE target price.  I highly doubt that we'll see VFC trading for a PE ratio around 8.50.

The average of all the valuation models gives a target entry price of $118.03 which means that VFC is currently trading at a 25.1% premium to the average.. I've also calculated it with the highest and lowest valuation methods thrown out.   In this case, the DCF and DDM valuations are thrown out and the new average is $111.40.  VFC is trading at a 32.6% premium to this price as well.

Assuming that VFC can grow their earnings and dividends at the rates that I assumed you're looking at decent returns for the next 5 years.  In 2018 EPS would be $14.80 and slapping an average PE of 11.33 gives a price of $185.30.  Over the next 5 years you'd also receive $20.99 in dividends for a total return of 39.68% which is good for a 6.91% annualized rate.  If you purchase at the fair value price of $118.03 your projected 5 year total return is 74.78% for an annualized return of 11.81%.  I think these are fairly conservative assumptions since VFC should be able to grow their dividend faster than the 6.32% annual increase in my calculations.

Overall, I would say that VFC is  fairly valued right now.  They could be set for elevated growth if the economy returns to normal levels.  As more people become employed there will be more disposable income available, and what better place to spend it than on clothes.  They have been trying to expand into foreign markets which will lead to further growth.  I'd like to own some VFC in the future, but it's not at an extreme value proposition just yet.  The market has been a little heated lately so I'd probably hold off on it for now with possibly a purchase should it dip to the $130's.  The 2.50% yield level is at $139.20 and the 2.75% yield is at $126.55.

What do you think about VFC as a DG investment at today's prices?

*Thanks DGM for catching the FCF issue.  I've since updated the sections that use FCF.  I only have data since 2007 for FCF.
Email Post
Labels: stock analysis