I've been meaning to revisit my analysis on Johnson and Johnson since it's been a year since I first looked at them.  I've learned so much more about stock analysis in that time so this will be more thorough and hopefully more insightful.  They are a dividend champion with 50 consecutive years of increasing dividends.  J&J closed trading on Wednesday, April 3rd at $82.07.

Analysts expect Johnson and Johnson to grow earnings 6.58% per year for the next five years and I've assumed they can continue to grow at 3.50% per year thereafter. Running these numbers through a two stage DCF analysis with a 10% discount rate yields a fair value price of $93.35. This means the shares are trading at a 12.1% discount to the DCF.

Johnson and Johnson's average high dividend yield for the past 5 years is 3.73% and for the past 10 years is 3.01%. This gives target prices of $65.47 and $81.00 respectively based on the current annual dividend of $2.44.  The high yields are pretty different.  I think it's going to be closer to around 3.25% going forward which gives a price of $75.08.  Johnson and Johnson is currently trading at a 9.3% premium to my assumed average high dividend yield valuation. 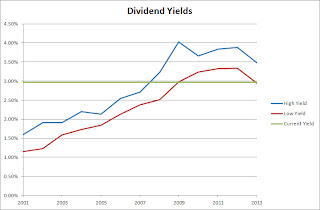 For the DDM, I assumed that JNJ will be able to grow dividends for the next 5 years at the minimum of 15% or the lowest of the 1, 3, 5 or 10 year growth rates. In this case that would be 6.67%.  After that I assumed they can continue to raise dividends for 3 years at 75% of 6.67% or 5.00% and in perpetuity at 3.50%.  The dividend growth rates are based off fiscal year payouts and don't necessarily correspond to quarter over quarter increases.  To calculate the value I used a discount rate of 10%.  Based on the DDM, JNJ is worth $43.59 meaning it's overvalued by 88.3%.

JNJ's shares outstanding have been in an overall downtrend with an average decrease of 0.82% since FY 2002, save a few years of increasing shares.  Over that time they've bought back 7.9% of their shares outstanding.  By repurchasing shares, JNJ is able to increase EPS and management can return cash to shareholders this way by increasing the ownership stake of the company for all the outstanding shares.  I would have liked to see management upping the buyback program during the "Great Recession", but it was actually lower in FY 2009-2011 than in FY 2006-FY 2008.  The biggest issue I have with buybacks is when they aren't done on a strategic basis due to undervaluation.  If they pay more than fair value for the shares, then they are destroying shareholder value because that money could have been spent in more productive ways.  If the program was maintained or increased during and after the "Great Recession" they could have created a lot more value. 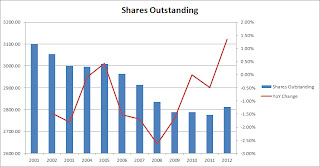 Johnson and Johnson is a dividend champion with 50 consecutive years of increases.  Their current annual dividend sits at $2.44 for a yield of 2.97%.  JNJ's annual increases for the last 1, 3, 5 and 10 years have been 6.67%, 7.54%, 8.18% and 11.61%.  These numbers are different from the actual quarterly increases since they are based off the dividends paid out during each fiscal year.  Their payout ratio has averaged 44.0% since 2001, peaking in 2011 with a 64.5% ratio.  The payout ratio has increased the last two years due to the massive amounts of recalls they've had to make.  I'd like to see it settle back down into the mid 40's area.  Having a low payout ratio leaves more room for management to increase the dividend without overly burdening the underlying business. 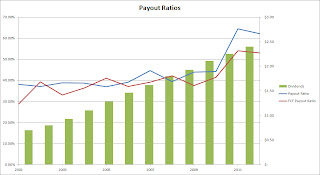 Johnson and Johnson's free cash flow has been great since FY 2001 with every year having a positive cash flow.  Their free cash flow payout ratio has averaged only 40.2% since FY 2001.  This is lower than the payout based on earnings which is good to see.  Annual total shareholder return when accounting for buybacks plus dividends has averaged 82.0% of FCF since FY 2001.  In FY 2002 and 2012 the total payout was greater than 100% of FCF, if you back out those 2 years they've averaged 68.0%.  Total yield, % shares bought back + dividend yield has averaged a pretty measly 3.52% since FY 2002, but has increased the last few years averaging 4.49% between FY 2007 and FY 2011.  The increase was mainly due to the average yield increasing due to the undervaluation during the "Great Recession".  This just goes to show how important it is to have cash available for special opportunities. 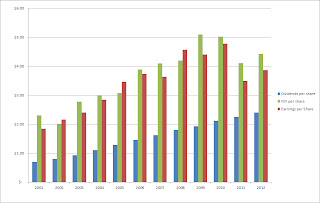 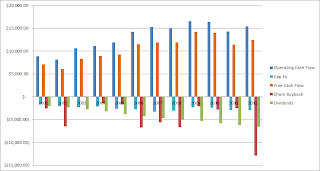 Since the basis of dividend growth is revenue and net income growth, we'll now look at how JNJ has done on that front.  Their revenue growth since 2001 has been pretty solid with a 6.36% annual increase and their net income has been growing at a 4.77% rate.  Since their net income has been growing slower than revenue, their net income margin has decreased from 18.2% to 15.6% between FY 2002 and FY 2012.  Over that time, JNJ has only had 2 negative years of revenue growth, FY 2009 and FY 2010, with net income taking a big hit in FY 2011 due to the recalls.  I feel that we'll start to see these metrics improve and the net income margin to rise going forward with the massive amounts of recalls done with. 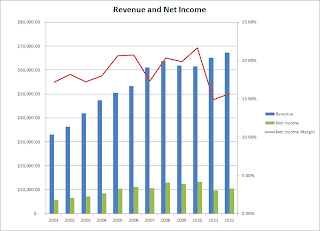 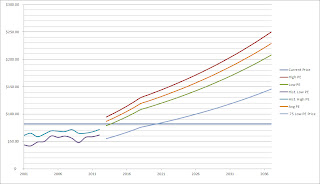 The chart shows the historical high and low prices since 2001 and the forecast based on the average PE ratios and the expected EPS values. I have also included a forecast based off a PE ratio that is only 75% of the average low PE ratio.  I like to the look to buy at the 75% Low PE price or lower to provide for additional margin of safety. In this case the target low PE is 14.6 and the 0.75 * PE is 10.2.  This corresponds to an entry price of $55.15 based off the expected earnings for FY 2013 of $5.41. The average PE price would give a target price of $86.71.  Currently JNJ is trading at a $26.92 premium to the 75% low PE target price and a $4.64 discount to the average PE price.  If you believe the analyst estimates are pretty close, then JNJ is trading on the low end of it's typical range and could be a buy, but it's still well above the 75% low PE price.

The average of all the valuation models gives a target entry price of $65.41 which means that Johnson and Johnson is currently trading at a 25.5% premium to the average.. I've also calculated it with the highest and lowest valuation methods thrown out.   In this case, the DCF and DDM valuations are removed and the new average is $63.88.  JNJ is trading at a 28.5% premium to this price as well.

Overall, I would say that Johnson and Johnson is currently in the fair value range.  I'd love to own some JNJ because their prospects going forward are still solid.  While their payout ratio off earnings is a little high, it's still only about 50% of their FCF which leaves plenty of room to further increase the dividend.  Based on the average of it's typical yield, P/E, and P/S ratios it should trade around $79.87 and the high valuation level would be around $87.55.  With a dividend increase likely coming in late April, now could be a good time to pick up some shares.  If there is a bit of a pullback to the sub-$80 level I'll be looking to initiate a position.  It won't be the best price that's around but as Warren Buffet has said "it's better to buy a great company at a fair price, than a fair company for a great price."

With JNJ, the numbers for the last few years for both net income and earnings are skewed a little bit due to the recall issues.  Management said that the recalls negatively effected earnings in 2012 by $1.24 per share.  If you believe that they are a non-recurring item and won't come up again, then JNJ is trading at an undervalued or at least a better value price.

What do you think about Johnson and Johnson as a DG investment at today's prices?
Email Post
Labels: stock analysis