I'm finally getting back to posting some stock analyses.  For some reason I just didn't have the motivation, I'm not sure if it was a bit of a burn out but I think it was mainly just due to laziness.  I don't mind compiling the data but actually writing the posts is what I always get hung up on.  I've got a new focus and motivation of course that might also be since I'll be able to start investing again.  A lot of my free capital has been going towards the house down-payment so investing has taken a backseat.  Today I'm going to look at International Business Machines (IBM).  They were trading around $189.31 during trading on Monday, August 12th.

Analysts expect IBM to grow earnings 10.59% per year for the next five years and I've assumed they can continue to grow at 2/3 of that rate, 7.06%, for the next three years and then 3.50% per year thereafter. Running these numbers through a three stage DCF analysis with a 10% discount rate yields a fair value price of $363.56. This means the shares are trading at a 47.9% discount to the discounted cash flow analysis.

The Graham Number valuation method was conceived of by Benjamin Graham, the father of value investing, and calculates the maximum price one should pay for a company given the earnings and book value.  IBM earned $14.08 per share in the last twelve months and has a current book value of $16.14.  The Graham Number is calculated to be only $71.51, suggesting that IBM is overvalued by 164.8%.

IBM's average high dividend yield for the past 5 years is 2.07% and for the past 10 years is 1.79%.  This gives target prices of $183.36 and $211.70 respectively based on the current annual dividend of $3.80.  I think the average high dividend yield will slowly creep up but slightly over the 2.00% level is reasonable for the next few years.  For that reason I'll use the 5 year average.  IBM is currently trading at a 3.3% premium to this price. 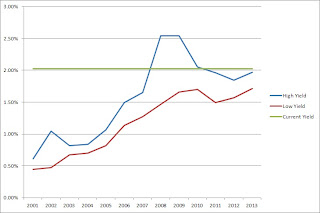 IBM' has committed to buying back shares as a way to return cash to shareholders.  Since FY 2001, they've purchased over 34% of their shares outstanding for an average annualized decrease of 3.8%.  Buybacks are great as long as they are purchasing shares at a value price point, otherwise they are reducing shareholder value through the buyback program.  Looking at the historical data, the increased buyback program coincides with better value prices available in the market.  By repurchasing shares, IBM is able to increase EPS and management can return cash to shareholders this way by increasing the ownership stake of the company for all the outstanding shares. 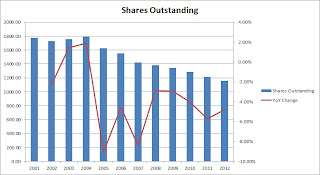 IBM is a dividend contender with 18 consecutive years of dividend increases.  For a technology company that is pretty outstanding as most tech companies suffered greatly during the dotcom fallout and typically need to reinvest most of their earnings back into the company.  They have increased the dividend at a 12.12%, 13.96%, 14.26%, and 19.37% rate for the last 1, 3, 5, and 10 year periods.  In typical fashion the price has grown along with the dividend albeit not as fast.  Their current yield is 2.01%.  Their payout ratio based off EPS has almost doubled since FY 2001 which has allowed the dividend to increase faster than EPS have grown, although it's still at a very manageable 23% for FY 2012.  Going forward I expect the dividend growth to still outpace earnings growth due to the large share buybacks and an increasing payout ratio.  Due to managements' willingness to increase the dividend faster than earnings I expect that trend to continue since there's still plenty of earnings to reinvest in the company. 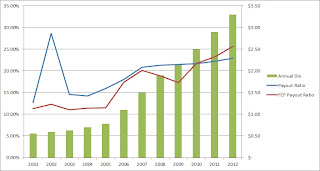 IBM is a cash generating machine.  Their free cash flow has grown from $8.61B in 2001 to $14.54B in 2012, good for a 14.65% annualized increase.  The free cash flow after dividends have been paid has risen from $7.64B to $10.62B over that same time for a 9.78% annual increase.  The free cash flow payout ratio has averaged 17.8% since FY 2003, which is just a bit higher than the payout based on earnings.  Annual total shareholder return when accounting for buybacks plus dividends has averaged 96.32% of FCF since FY 2003 so it will have to come down or management will be forced into a major decision.  This is mainly due to the absurdly high buyback plan where they've spent over $42.42B on buybacks in the last three fiscal years.  I would like to see the buyback program scaled back some with more of the cash devoted to dividends but I don't really have much of a say in that.  Debt levels have been increasing which has allowed has helped to fund some of the buyback. 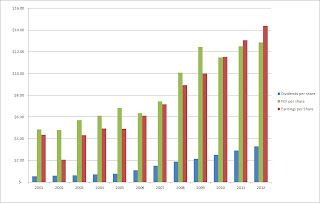 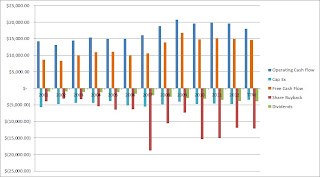 IBM's equity stake has decreased since FY 2001 and now sits at $18.86B with a total debt level of $33.27B.  Currently their debt to equity ratio is at 1.76.  I would much prefer to see the debt level come down from current levels although it's not as dire a situation as it looks as IBM has essentially formed it's own financing arm and most of the debt is related to that.  This allows them to finance the purchases from their customers which can potentially bring in more customers but is still a double-edged sword since those companies could overextend themselves and default on their loans.  For a more in depth analysis of the debt levels check out this article on Seeking Alpha.  Their ROE for FY 2012 was a pretty ridiculous 88% although that has been achieved through lower equity (i.e. more debt) and better efficiency within the company.  Their ROE has averaged 53.2% since FY 2003.  Their ROCI is equally impressive growing from 16.9% in FY 2003 to 38.7% in FY 2012 with an average of 26.8%.  I don't necessarily look for any specific levels for ROE or ROCI but prefer to see stable to increasing levels.  IBM has increased both ROE and ROCI over the last 10 years and while I don't expect either to continue growing at the past rates and to probably level out.  I would actually prefer to see the ROE decrease some if it's due to the the equity portion increasing and thus yielding a lower ROE.

Since the basis of dividend growth is revenue and net income growth, we'll now look at how IBM has done on that front.  Their revenue growth since 2002 has been pretty unspectacular at just 2.56% annual increases.  Although their net income growth has been incredible as 16.59% annual increases.  This has led to a almost quadrupling of their net income margin since 2002's 4.41% to 2012's 15.89%.  IBM has been able to increase efficiencies in their operations as well as push higher margin products/services to their customers.  I hope to see their revenues grow at a faster rate in the future; however, analysts are expecting -2.00% sales growth from 2012 to 2013 and 2.30% growth from 2012 to 2014.  This is something to be concerned with as technology hardware doesn't "age" as fast as it used to which means longer replacement/upgrade intervals. 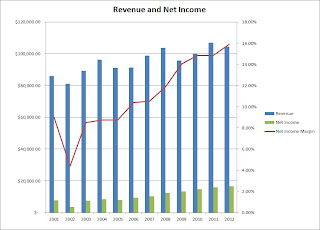 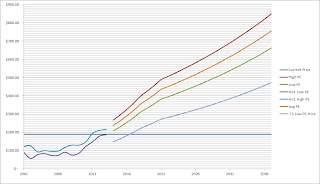 The chart shows the historical high and low prices since 2001 and the forecast based on the average PE ratios and the expected EPS values. I have also included a forecast based off a PE ratio that is only 75% of the average low PE ratio.  I like to the look to buy at the 75% Low PE price or lower to provide for a large margin of safety, although this price doesn't usually come around very often. In the case of IBM, the target low PE is 12.94 and the 0.75 * PE is 8.50.  This corresponds to an entry price of $218.76 based off the expected earnings for FY 2013 of $16.91, with a 75% target price of $136.82.  Currently IBM is trading at a $52.49 premium to the 75% low PE target price and a $29.45 discount to the average PE price.  If you believe the analyst estimates are pretty close, then IBM is trading on the low end of it's valuation range.

The average of all the valuation models gives a target entry price of $174.51 which means that IBM is currently trading at a 8.5% premium to the target entry price. I've also calculated it with the highest and lowest valuation methods thrown out.   In this case, the DCF and Graham Number valuations are removed and the new average is $153.00.  IBM is trading at a 23.4% premium to this price as well.

According to Yahoo! Finance the 1 year target estimate is at $217.80 suggesting plenty of room for capital gains at current price levels.  Morningstar has IBM rated as a 3 star stock meaning it's a hold.  Here's a snapshot from Morningstar's valuation page on IBM.

I was really surprised to see that IBM's revenue growth has pretty much stalled over the last 10 years.  I know some of that is due to their size but I would have expected to see higher than just 2.5% annual growth. One major issue with IBM is that they are in the technology sector which usually requires large amounts of R&D to maintain an advantage.  And even then there's always breakthroughs that no one was expecting.  Another is that due to the advances in technology the replacement intervals have increased.  Tech products now stay relevant longer meaning that as a company you're not completely behind your competitors just one or two years after a replacement cycle.  There have been struggles with IBM but I believe a lot of that can be attributed to the overall sluggish "recovery" we've seen since the depths of the financial crisis.  If the economy really does start to grow at a more normal rate, I expect IBM to benefit.  Management's goal is to reach $20.00 per share earnings by 2015.

Recently Credit-Suisse has downgraded IBM stock and that led to a 2.5% drop.  The Credit-Suisse report has largely been considered pretty flimsy and the timing of it was pretty shady as well.  For long-term dividend growth investors I think that IBM represents a pretty good value at current prices because I expect dividend growth to be 10%+ for several more years.  Selling puts is pretty much out of the question unless you have very high conviction in the company as it would require around $19,000 to purchase the shares should the put be executed.  I'm looking to try and pick up some shares of IBM at a little bit lower prices from here, probably somewhere around $187-188 to start a position.  Of course, that's if it's still in this area when I can finally start investing again sometime in September.

What do you think about IBM as a DG investment at today's prices?  How do you think the long-term dividend growth prospects are?
Email Post
Labels: stock analysis