If you take a look at my portfolio I'm lacking in two major areas that I'd like to get more exposure too.  One is the food industry, I only have KO and MCD that are direct plays on food and the other is healthcare.  The demographics both in the United States and globally is trending towards an older population which generally means more healthcare services.  Today I'm going to take a closer look at Baxter Intenational, Inc.  BAX closed trading on Tuesday, August 27th at $70.60.

Analysts expect Baxter to grow earnings 8.83% per year for the next five years and I've assumed they can grow at 2/3 of that, or 5.89%, for the next 3 years and continue to grow at 3.50% per year thereafter. Running these numbers through a three stage DCF analysis with a 10% discount rate yields a fair value price of $94.53. This means the shares are trading at a 25.3% discount to the discounted cash flow analysis.

The Graham Number valuation method was conceived of by Benjamin Graham, the father of value investing, and calculates the maximum price one should pay for a company given the earnings and book value.  Baxter earned $4.01 per share in the last twelve months and has a current book value of $13.42.  The Graham Number is calculated to be $34.80, suggesting that Baxter is overvalued by 102.9%.

Baxter's average high dividend yield for the past 5 years is 2.76% and for the past 10 years is 2.25%.  This gives target prices of $70.92 and $87.14 respectively based on the current annual dividend of $1.96.  The average high yield has been slowly rising and I think it will continue to do so as the company pays out more dividends so I'll use the 5 year price in my target entry price calculations.  Baxter is currently trading at a 0.46% discount to the average high dividend yield valuation, so essentially it's at the target entry price. 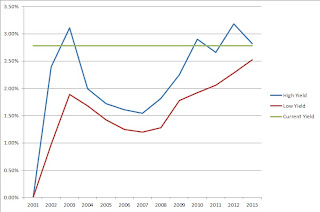 Baxter's average low PE ratio for the past 5 years is 14.05 and for the past 6 years is 18.61.   This corresponds to a price per share of $65.60 and $86.90 respectively based off the analyst estimate of $4.67 per share for fiscal year 2013.  The 10 year low PE ratio is skewed a bit high due to the higher PE ratios it's stock was commanding in the early 2000's.  I think the 5 year average low PE ratio is more typical of what we will see going forward so I'll use that in my target entry price calculations.  Baxter is trading at a 7.6% premium to this price.

Baxter's average low PS ratio for the past 5 years is 2.06 and for the past 10 years is 2.17.  This corresponds to a price per share of $63.95 and $67.33 respectively based off the analyst estimate for revenue growth from FY 2012 to FY 2013.  The price targets don't include effects due to potential share buybacks, rather it's just based off the analyst estimate for revenue and growth to be a bit conservative.  Currently, their current PS ratio is 2.67 on a trailing twelve months basis.  Both ratios are fairly close so I'll use the average of the 2 in the target entry price calculation giving a price of of $65.65.  Baxter is currently trading at a 7.6% premium to this price.

Baxter's gross margins for FY 2011 and FY 2012 were 55.5% and 56.5% respectively. They have averaged a 52.6% gross profit margin over the last 10 years.  Their net income margin for the same years were 16.2% and 16.4%.  Since 2003 their net income margin has averaged 13.0% with a low of 4.1% in FY 2004.  I typically like to see gross margins greater than 60% and at least higher than 40% with net income margins being 10% and at least 7%.  While their gross margin isn't quite at the 60% level it's been fairly stable and is very close to the 60% mark.  The net income margin is well over the 10% mark which is great to see.  Since each industry is different and allows for different margins, I feel it's prudent to compare Baxter to its industry.  For FY 2012, Baxter captured only 92% of the gross margin for the industry but a pretty stunning 118% of the net income margin.  Looking back over the last 5 fiscal years the trend is the same with BAX having lower gross profit margins but exceeding the net income margins by a significant amount.  The lowest that they've beat the net income average was by 8.8%.  Given the high level of the gross margin I'm not overly concerned with them typically earning lower levels here, it's what falls to the bottom line that really counts and Baxter is able to turn more of each dollar of sales into after-tax profit than the industry as a whole.

Baxter started off the decade by growing their shares outstanding, but since FY 2007 have had a net decrease of outstanding shares since with every year being a decline.  Since 2002 they've bought back 10% of their outstanding shares for an average annual decline of 1.05%.  Starting in FY 2007 they stopped raising capital by issuing treasury shares and have only repurchased shares.  After starting the buyback program they've bought back 15% of their shares outstanding for an average annual decline of 3.19%.  Buybacks are great as long as they are purchasing shares at a value price point, otherwise they are reducing shareholder value through the buyback program.  It appears that Baxter's management has done an adequate job of controlling shares outstanding as the buyback program was initiated in FY 2007 and ramped up during the "Great Recession" when shares appear to have been trading at a discount to their fair value. 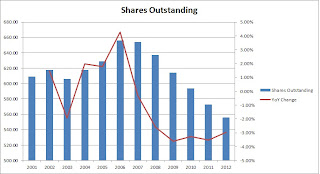 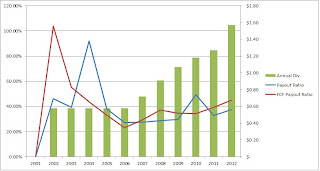 Baxter has done a great job managing their cash flow and have been able to turn 63.2% of their operating cash flow into free cash flow over the last 5 years.  Their free cash flow has grown from $1.613B in 2007 to $1.945B in 2012, good for a 3.8% annualized increase while their free cash flow after dividends has from from $909M to $1.141B over the same time for a 4.7% annual increase.  The free cash flow payout ratio has averaged only 37.4% since FY 2003 and 38.1% over the last 5 fiscal years.  Their FCF payout has essentially been the same as the traditional payout ratio based off earnings per share.  Annual total shareholder return when accounting for buybacks plus dividends has averaged 121.1% of FCF since FY 2007 due to the buyback program.  This has led management to increase the debt levels in order to partially fund the buyback program and is something to keep an eye on. 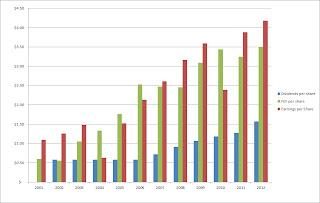 Baxter's ROE has averaged a solid 30.5% over the last 5 years and 25.9% over the last 10 years.  Baxter's ROCI has averaged just 26.1% over the last 5 years and 19.5% over the last 10 years.  The ROCI hasn't grown at the same rate as the ROE due to the management taking on more debt.  I don't necessarily look for any absolute values for ROE or ROCI but rather fairly stable or increasing levels which Baxter has shown to be able to increase their ROE and ROCI although I'd expect it to level off at current levels.  Management had been doing a great job of decreasing their debt levels but since FY 2006 they have been increasing again.  Good news for shareholders though is that the equity stake has increased faster then their debt level leading to a decline in the total debt to equity ratio from 1.38 in FY 2003 to 0.85 in FY 2012.  Their balance sheet is pretty clean although I would prefer to see their debt levels come down a bit.

Since the basis of dividend growth is revenue and net income growth, we'll now look at how Baxter has done on that front.  Their revenue growth since 2003 has been solid with a 5.8% annual increase while their net income growth has been outstanding at 11.6% per year.  This has led to their net profit margin increasing over time from 9.9% to 16.4%.  I'm not sure that we'll see the same elevated growth of their net income in relation to revenue going forward, but if they can maintain their net income margins while continuing to grow revenue then things will be just fine. 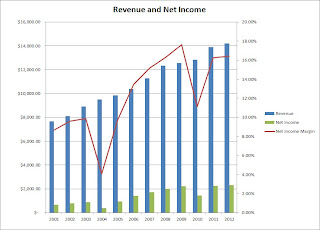 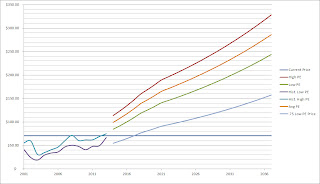 The chart shows the historical high and low prices since 2001 and the forecast based on the average PE ratios and the expected EPS values. I have also included a forecast based off a PE ratio that is only 75% of the average low PE ratio.  I like to the look to buy at the 75% Low PE price or lower to provide for a larger margin of safety, although this price doesn't usually come around very often. In the case of  Baxter, the target low PE is 16.33 and the 0.75 * PE is 12.25.  This corresponds to an entry price of $66.66 based off the expected earnings for FY 2013 of $4.67, with a 75% target price of $49.20.  Currently Baxter is trading at a $21.40 premium to the 75% low PE target price and a $3.94 premium to the average low PE price.  If you believe the analyst estimates are pretty close and that it will continue to trade in it's historical PE ranges, then Baxter is currently close to it's typical low price but not at bargain basement prices.

The average of all the valuation models gives a target entry price of $63.35 which means that Baxter is currently trading at a 11.4% premium to the target entry price. I've also calculated it with the highest and lowest valuation methods thrown out.   In this case, the DCF and Graham Number valuations are removed and the new average is $62.69.  Baxter is trading at a 12.6% premium to this price as well.

According to Yahoo! Finance the 1 year target estimate is at $80.50 suggesting about 14% upside from Tuesday's close.  Morningstar has Baxter rated as a 4 star stock meaning suggesting that it's trading for a discount to their fair value estimate.

I try to find companies that have a long-term bullish trend and there's not many other industries that should experience continued growth than healthcare.  The tailwinds due to population demographics and increased health care requirements, i.e. spending, due to old age is pretty profound.  Baxter is fairly tied to issues with the kidneys but luckily for investors that has a double impact with old age and the obesity epidemic leading to diabetes and kidney issues as well. 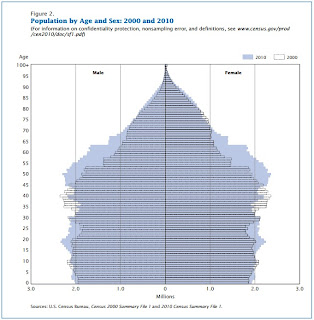 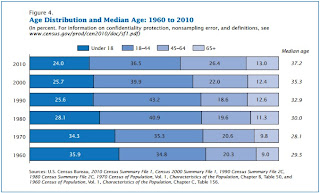 Given the demographic trends, product line and success of the company I think Baxter would make a good investment at current prices.  For my own portfolio I would be picking up some shares around today's price since I badly need some more exposure to healthcare since Medtronic is my only holding there.  They don't have the long history of dividend growth that a MDT, BDX or JNJ has but you have to start somewhere and a 7 year streak shows a willingness by management to keep raising the dividend.  I just hope that shares are trading around these levels or lower when I can have some free capital to invest again.

What do you think about Baxter International, Inc. as a DG investment at today's prices?  How do you think the long-term dividend growth prospects are?
Email Post
Labels: stock analysis