It's been a long time since I've posted a stock analysis.  Much too long in fact and I apologize for that, but I've gotten renewed vigor to post some analyses and I'm hoping to get several out this week.  If there's any other companies that you'd like me to take a deeper look at feel free to email or comment about it.  Today I'm going to look at Dr. Pepper Snapple Group (DPS) and it's dividend growth prospects.  The company was spun off from Cadbury in 2008.  I enjoy the namesake product of Dr. Pepper as well as several of their other products.  Shares closed trading on August 9th at $46.85.

Analysts expect Dr. Pepper-Snapple to grow earnings 7.53% per year for the next five years and I've assumed they can continue to grow at 2/3 of the analyst's 5 year growth rate, 5.02%, and then at 3.50% per year thereafter. Running these numbers through a 3 stage DCF analysis with a 10% discount rate yields a fair value price of $56.51. This means the shares are trading at a 17.1% discount to the discounted cash flow analysis.

The Graham Number valuation method was conceived of by Benjamin Graham and calculates the maximum price one should pay for a company given the earnings and book value of a company.  DPS's earned $2.93 per share in the last year and have a current book value of $11.31 per share.  The Graham Number is calculated to be $27.31, suggesting that DPS is overvalued by 71.6%. 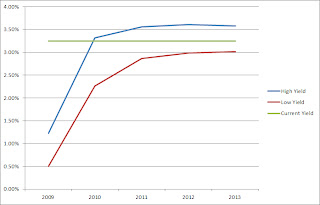 DPS' average low PS ratio for the past 3 years is 1.31 and for the past 5 years is 1.04.  This corresponds to a price per share of $40.01 and $31.57 respectively based off the analyst estimate for revenue growth from FY 2012 to FY 2013.  Although the 5 year is skews the results lower due to the 0.56 ratio they carried in FY 2009 which coincided with the generational lows in the markets.  Currently, their current PS ratio is 1.60 on a trailing twelve months basis.  I'll use the average of the two just to be conservative, giving a price target of $35.79.  Dr. Pepper Snapple is currently trading at a 30.9% premium to this price.

For the DDM, I assumed that Dr. Pepper-Snapple will be able to grow dividends for the next 5 years at the minimum of 15% or the lowest of the 1, 3, or 4 year growth rates.  In this case that would be 11.76%.  After that I assumed they can continue to raise dividends for 3 years at 75% of 11.76% or 8.82%, and in perpetuity at 3.50%.  The dividend growth rates are based off fiscal year payouts and don't necessarily correspond to quarter over quarter increases.  To calculate the value I used a discount rate of 10%.  Based on the DDM, DPS is worth $36.22, meaning it's overvalued by 29.4%

Dr. Pepper has been buying back shares pretty quickly.  In just the 5 full years they've been an independent company they've already retired 16.4% of the shares outstanding, good for an average of 4.38% per year.  I'm not sure that buybacks are the best use of the company's resources at this time.  Buybacks are great as long as they are purchasing shares at a value price point, otherwise they are reducing shareholder value through the buyback program.  By repurchasing shares, DPS is able to increase EPS and management can return cash to shareholders this way by increasing the ownership stake of the company for all the outstanding shares. 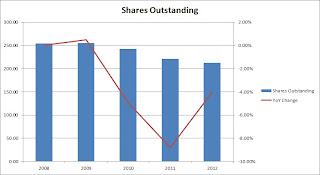 Dr. Pepper's management has shown they are willing to pay a dividend as well as increase it at a nice rate.  They first initiated the dividend in FY 2009 and have raised it every year since.  If they dividend is maintained at current levels through FY 2013 this will be four straight years of increases.  They have increased the dividend at a 11.76%, 19.09%, and 78.42% rate for the last 1,3, and 4 year periods.  Not only have they been growing the dividend at a great rate, the current yield is still solid 3.24% level currently.  Their payout ratio based off EPS has risen since FY 2009 which has allowed the dividend to increase faster than EPS have grown.  I expect it to track closer to EPS growth going forward.  Since FY 2009 the payout ratio has increased from 6.9% to 46.0% and has averaged 34.6% over that time.  Although since they started paying meaningful dividend in FY 2010, the payout ratio has averaged 43.9%, while much higher it's still at a manageable level. 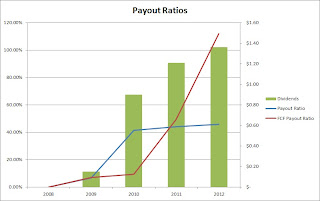 Their free cash flow hasn't been all that great since becoming an independent company and has actually decreased from $405M to $258M from FY 2008 to FY 2012.  I expected their cash flow to be higher than this or at least show more consistent growth.  The free cash flow payout ratio has averaged only 44.5% since FY 2008 although that's including a really high 111.9% in FY 2012.  I think DPS will be fine but I'd definitely be monitoring the cash flow of this company.  Annual total shareholder return when accounting for buybacks plus dividends has averaged 116.2% of FCF since FY 2009 so it will have to come down or management could be forced with a dividend cut.  This has been made possible due to the increase of debt.  Some companies has the size and business model to use larger amounts of debt; however, I don't think that DPS falls in that category just yet. 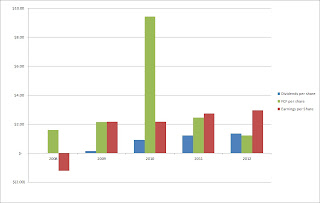 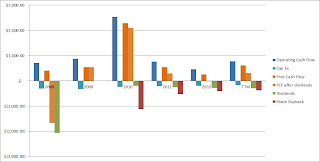 DPS' equity stake has fallen since becoming a publicly traded company from $2.607B to $2.280B.  They've been carrying a relatively high average total debt to equity ratio 1.11 between FY 2008 and FY 2012.  They're ROE is still solid at 27.6% for FY 2012 and averaging 23.3% since FY 2009.  I excluded FY 2008 due to the loss.  Their ROCI came in at 13.0% for FY 2012 and has averaged 12.0% since FY 2009, FY 2008 was excluded due to the loss.  I think the debt levels need to be watched pretty closely because leverage can boost your returns in good times but they also can quickly spell your doom in bad times.  I don't necessarily look for an absolute level of ROE or ROCI, rather I look for stable to increasing levels.  DPS' ROE seems to be increasing due to the fact that the equity stake has decreased combined with slow growing net income.

Since the basis of dividend growth is revenue and net income growth, we'll now look at how Dr. Pepper Snapple has done on that front.  Their revenue growth since 2008 has been relatively flat at only 1.23% annual growth.  Their net income has been better at 4.26% growth since FY 2009.  Since their net income has been growing faster than revenue, their net income margin has increased from 10.0% to 10.5% between FY 2009 and FY 2012.  Analysts expect only meager revenue growth in 2013 of 1.50% and 2.70% for FY 2014.  So any gains in net income is going to come from being more efficient rather than overall growth of the company. 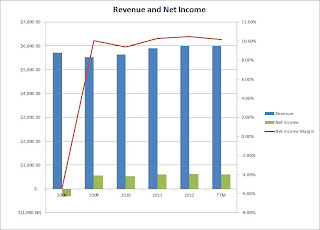 The chart shows the historical high and low prices since 2008 and the forecast based on the average PE ratios and the expected EPS values. I have also included a forecast based off a PE ratio that is only 75% of the average low PE ratio.  I like to the look to buy at the 75% Low PE price or lower to provide for a large margin of safety, although this price doesn't usually come around very often. In the case of Dr. Pepper-Snapple, the target low PE is 12.19 and the 0.75 * PE is 9.14.  This corresponds to an entry price of $43.09 based off the expected earnings for FY 2013 of $3.08, with a 75% target price of $28.15.  Currently DPS is trading at a $18.70 premium to the 75% low PE target price and a $3.76 premium to the average PE price.  If you believe the analyst estimates are pretty close, then Phillip Morris is probably trading on the high end of it's fair value range if not in overvalued territory.

The average of all the valuation models gives a target entry price of $39.50 which means that Dr.Pepper-Snapple is currently trading at a 18.6% premium to the target entry price. I've also calculated it with the highest and lowest valuation methods thrown out.   In this case, the DCF and Graham Number valuations are removed and the new average is $38.29.  Dr. Pepper-Snapple is trading at a 22.4% premium to this price as well.

Assuming that Dr. Pepper-Snapple can grow their earnings and dividends at the rates that I assumed, you're looking at okay returns over the next 10 years.  In 2023, EPS would be $5.26 and slapping an average PE of 13.99 gives a price of $73.54.  Over the next 10 years you'd also receive $27.38 in dividends for a total return of 156.98% which is good for a 7.98% annualized rate if you purchase at the current price.  If you purchase at my target entry price of $39.50, your projected 10 year total return jumps to 186.19% for an annualized return of 9.83%.  Using the assumed growth rates, dividends would continue to grow faster than earnings leading to a payout ratio approaching 70% in 2023.

According to Yahoo! Finance the 1 year target estimate is at $49.36 suggesting only about 6% upside from current price levels.  Morningstar has DPS rated as a 3 star stock meaning it's a hold.

Overall, I was kind of surprised to see that DPS wasn't in a better situation.  I'd heard good things about the company and I really enjoy their products but I don't know if now would be the best time to invest your capital in DPS.  There's just no margin of safety at current prices and given the relatively meager growth expectations I think investors will be disappointed.  Due to management's higher debt positions, although it should be relatively cheap debt, I'm concerned about what another downturn in the economy would do to their business.  One other major concern is that Dr. Pepper uses Coca-Cola's and Pepsi's distribution networks to get their syrup.  While they are long-term contracts, there's still the potential that when it comes time to sign a new contract that one or the other company can play hardball to get better terms.  I don't think that will really happen because if either KO or PEP falters, the other will gladly scoop up the rest of the DPS distribution with what would most likely be favorable terms for whichever company did so.

What do you think about Dr. Pepper Snapple Group as a DG investment at today's prices?  How do you think the long-term dividend growth prospects are?
Email Post
Labels: stock analysis