Why Dividends Matter: The Calm in the Storm 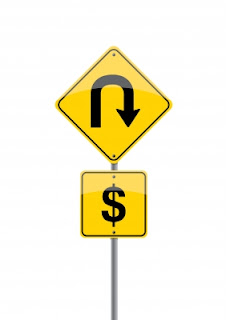 Dividends.  I love them.  One of the reasons that dividends are so awesome is that they provide a positive portion of return that can't be taken away.  If you receive a $50 dividend in cash that's a positive return.  Forever.  The company won't take it back out of your account if they decide they want some more cash.  It can never turn into a negative return unlike the capital gains portion of total return which is subject to the whims of the markets.  That little bit of return that you get from each payment may not seem like much in isolation but they add up over time.

What I'm talking about is called the payback period.  It's quite simple to calculate as you just divide the cumulative dividends you've received from a company into the total capital you've invested.  Simple as that.  If a company yields 3% you get a 0.75% return with each payment.  So in 33.3 years you'll receive your original investment back through the dividend payments.

However, something magical happens when you combine dividend payments with a company that also grows that dividend.  Just for an example say that 3% yielding company raised the dividend by 10%, now with each and every payment going forward you're receiving 0.825% of your investment back.  You already received 3% of your investment back the first year and the second year you'll receive 3.3%.

Now you might be saying a 0.75% or 0.825% return is nothing compared to the price movement that the markets can do because many companies will see their share price change by that much each day.  But the thing is there's no telling what the share price will do over the short term.  Over the long term the share price is likely to rise commensurately with the dividend growth, but over the next minute, hour, day, week, or month who knows where the share price will be.  Focusing on that little portion of positive return is what will eventually lead to riches.

Dividend payments also have a wonderful way of reassuring you whenever the markets misbehave.  It's those small bits of return you receive each quarter that can keep you sane when the markets turn bearish.  When you look at your portfolio and see nothing but red, make sure to check your cash balance because you just might have received some dividends.

I wanted to look at how the payback has evolved over time with my some of the positions in my portfolio.  First up let's look at The Coca-Cola Company.  You can check out my recent analysis of Coca-Cola here and why I think it still looks to offer solid returns.  I first purchased shares back in September 2011 and have added to my position three more times since then.  Also 10 dividend payments were reinvested into more shares since my brokerage allows for free dividend reinvestment.

In just over 4 years of owning shares I've already received 9.88% of my capital back in the form of dividends, except that capital is still out there working for me each and every day.  Just imagine how that will look after 10 or 20 years.

A comparable capital gains harvest strategy would have seen me deplete my investment capital to generate those same cash flows.

Here's how the payback looks for my portfolio as a whole for 2014 compared to YTD 2015.

The best part about it is that for each and every position the 2015 cumulative payback is a higher percentage than the 2014 cumulative payback.  That's exactly what I'm talking about here.  Each payment is a positive portion of return that you get to keep forever so it just builds on itself year after year.

A couple of notes about the graph.  (1) Some of the companies paybacks aren't 100% correct.  For example, in the case of COP and PSX the parent COP split into two companies but I received dividends from the combined COP prior to the split so some of those dividends should have been attributed to PSX.  So COP's payback should be a bit lower while PSX's should be higher.  (2) The total payback percentage for 2014 is based off the cumulative capital I have invested currently because I don't have the records for the total capital invested as of the end of 2014.  So 2014's payback percentage is actually higher than illustrated.  These are just accounting issues that don't effect the exercise of showing the power of dividends.  (3) Generally the further right you go on the chart the more recent the investment was made or the lower the dividend yield.

You'll see that some paybacks are huge and others are tiny, but the key takeaway is that in every single case the 2015 payback is higher than the 2014 one.  That's the real power of investing in companies that pay, as well as increase, those dividends.

One fun fact that I hadn't realized before is that I've received $11,100.61 in cumulative dividends from the companies that I still currently own.  So a little bit of celebrating is in order.

Dividends might not seem like much but they really are powerful if you give them time.  That initial 3% yield that grows every year for decades on end will lead to some really amazing results.  So far I've received 6.94% of my invested capital back in the form of dividends and that will just continue to grow as time goes on.

Does receiving dividends help keep you calm when the markets are going crazy?  Do you have any positions in your portfolio that have 50% paybacks yet?


Image provided by scottchan on FreeDigitalPhotos.net