On Tuesday Emerson Electric (Full Analysis Here) announced Q4 earnings that were quite disappointing.  A $0.04 miss on EPS, revenue miss, and underwhelming guidance through the first half of 2016.  While that's bad news all around it was expected and something else that I was sure would happen was an increase to their dividend.  The Board of Directors approved an increase in the quarterly dividend from $0.47 to a staggering $0.475.  I know a bit a of a let down since it's just a 1.1% increase but an increase is an increase and in all honesty it's more than I've received from my employer this year.  Since I own 61.804 shares of Emerson Electric, this raise will increase my forward 12-month dividends by $1.23.  Sweet I can go buy a soda or candy bar! 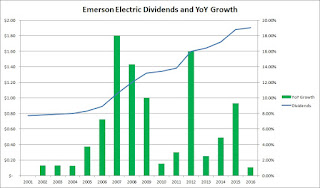 You can see the dividends continue to march higher year after year but the dividend growth is far from consistent.  Cyclical companies tend to have much lumpier dividend growth rather than a consistent march each year but growth is growth and the volatility in their operations allows for better entry points along the way.  In the good times we can expect a return to better increases in the bad times you get opportunities to buy shares at a discount and collect a fat dividend yield which is up to 3.83% after the increase.

Check out my stock analysis on Emerson Electric to see why I think it's still a good value despite the headwinds.

My forward dividends increased by $1.23 with me doing nothing.  That's right, absolutely nothing to contribute to their operations.  Based on my portfolio's current yield of 3.21% this raise is like I invested an extra $38 in capital.  Nothing to brag about but hey that's $38 dollars that I didn't actually have to invest.  Except that I didn't!  One of the companies I own just decided to send more of the profits my way.  That's how you can eventually reach the crossover point where your dividends received exceed your expenses.  That's DIVIDEND GROWTH INVESTING AT WORK!  That's the beauty of the dividend growth investing strategy because you build up your dividends by fresh capital investment as well dividend increases from the companies you own.

Unfortunately with the first increase for the month now come and gone I'm half way towards my expected dividend raises for the month.  November is not shaping up to be a spectacular month for organic dividend growth but October was a boom with 6 different companies giving me raises.  That's why you invest in more than a handful of companies.  Despite Emerson's small raise so far through organic dividend growth my dividends have grown at a weighted average of 9.55% for 2015 compared to 2014, although the 2016 to 2015 comparison is likely to come in a bit lower.

Are you disappointed with the token increase from Emerson Electric?  Are your other holdings picking up the dividend growth slack?