What a difference a month makes!  The stock market surged higher with the S&P 500 gaining 8.3% in October alone.  The majority of our net worth is tied to the performance of the stock markets so good months like October sees our net worth skyrocket but bad months like August or September sees our net worth decline along with the markets.  In the short term that's just noise to try and discourage you and it's in the bad months that I focus on my dividends.  Whether the markets are up or the markets are down those dividends continue to roll in throughout the month with just over $260 in passive income for the month.  Even better is the SIX dividend increases announced during the month.  That's extra money for doing nothing and I'm way okay with that.  Couple the market surge and a return to positive cash flow from my day job and it turned into a solid month.  During October my net worth charged higher by $26,601.32.

October was a nice relief after the constant bleeding from August and September.  Those two months brought just over a $40k decline to my net worth but the October bump lessens the blow and I'm only -$13.5k from the end of July now.  The $26.6k increase for October was my highest monthly climb ever which is a nice little milestone.  The bump from October was a 6.9% increase from September's total and I'm now just 1.1% behind where I ended 2014.

I'm just glad to be back to a cash flow positive situation from my day job which will allow me to start saving and investing once again on a regular basis.  There's still some big expenses coming our way to account for, such as property taxes and homeowners insurance, but I expect to be able to finally get back to making 1-2 purchases each month.  I have to admit I've been jealous of all of you and your purchases over the last couple months.  My last purchase was all the way back in late July so I've been a little antsy.

I don't see the point in paying extra on the mortgage at this time given our relatively low interest rate and think we'll come out much further ahead investing the extra cash flow.  So the liabilities side of the net worth equation will be slow moving.  However, once the FI portfolio is able to get to a self-sustaining level of dividends then I'll plan to aggressively pay down the mortgage.  As of the end of October we have 22.64% equity in our house.  Also, according to Zillow our house has increased just over $10k in value from our purchase price although I'm just using our purchase price in my net worth calculations.

I haven't set any goals yet, and probably won't, for my net worth because there's just too much in flux with our financial house to be able to come up with reasonable goals.  The net worth goal has always been a secondary goal since a lot of it is out of my control since I invest primarily in the stock market.  I'll just continue to focus on what I can control which is maintaining a high savings rate and investing in high quality companies at fair prices. 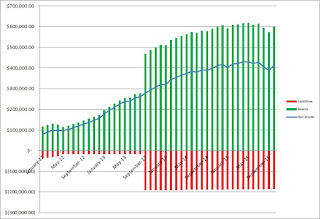 Truly passive income, dividends and interest, amounted to $261.31 during October which covered 4.6% of my monthly expenses.  Although there was a large expense related to catching up on savings for expenses like property taxes that would normally be prorated out each month.  Normalizing the expenses to account for that bring my passive income expense covered to 9.7%.  I also received payments from blogging/writing which amounted to another $257.11 paid in October which brings my total non-day job income to $518.42 which covered 19.2% of the normalized expenses.

Based on my expenses from October, my liquid savings would last for 2.87 years which is a big drop from September's mark of 7.62.  Although once again that's because of the large expense for savings that would normally be prorated out each month.  If you just take the prorated portion of what I owe the number climbs to 6.07 due in large part to the higher expenses in October.

How did your net worth fare in October?  Riding the market wave higher?