Analysts expect APD to grow earnings 7.13% per year for the next five years and I've assumed they can continue to grow at 3.50% per year thereafter. Running these numbers through a DCF analysis with a 10% discount rate yields a fair value price of $104.43. This means that at $80.43 the shares are undervalued by 23.0%. 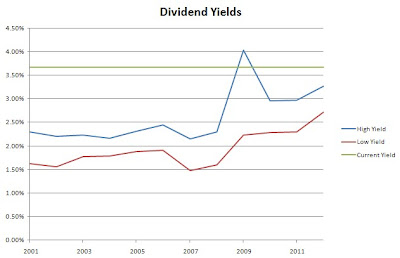 APD's trailing PE is 14.49 and it's forward PE is 12.71. The PE3 based on the average earnings for the last 3 years is 18.10. I prefer for the PE3 to be less than 15, which in this case means that APD is currently overvalued. Compared to it's industry, APD seems to be undervalued versus Airgas (20.85) and Praxair (19.41) but overvalued versus the industry as a whole (11.39). All industry and competitor comparisons are on a TTM EPS basis.

APD's gross margin for FY 2009/10 and FY 2010/11 was 27.95% and 27.44% respectively. Their gross margin is pretty solid around 30%, but I would prefer for it to be higher. Their net income margin for the same years were 11.68% and 12.51% respectively. I like the net income margin to be at least 10% and preferably rising. APD passes both of the net income margin criteria. Air Products & Chemicals has averaged a 9.19% net income margin since 2001 with a general uptrend in the values. The cash-to-debt ratio for the same years were 0.10 and 0.11. Their cash-to-debt ratio is what worries me, especially given that their debt is most likely what's leading to their free cash flow issues as you'll see below. 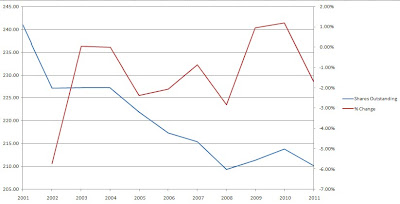 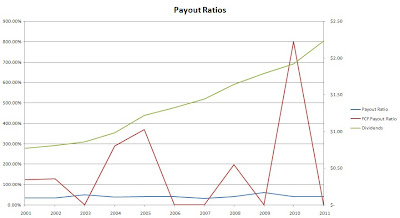 Their FCF however is quite troubling. They have had negative FCF for 5 years since 2001 and has averaged a -$0.33 per share FCF in that time. Things were looking okay with Air Products & Chemicals as an investment until this huge question mark came up. 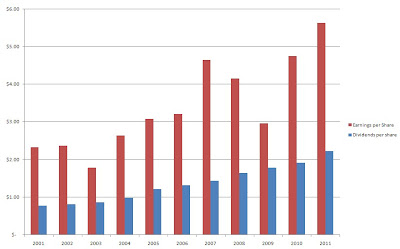 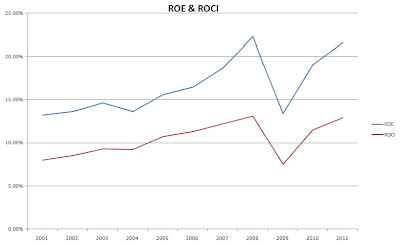 Since the basis of dividend growth is revenue and net income growth I've added a new section to my stock analysis. Here you can see APD's history of revenue and net income since 2001. Their revenue took a big hit from 2008 to 2009 but has been trending positive since then. Their net income and net income margin appear to be more cyclical in nature than their revenue. As the business cycle slows their net income and margin get squeezed but then they expand again as the business cycle grows again. This could be a good sign of things to come as their numbers have started growing again. If you believe the economy is going to get better before it gets worse then now could be a decent time to get in with APD on this basis. 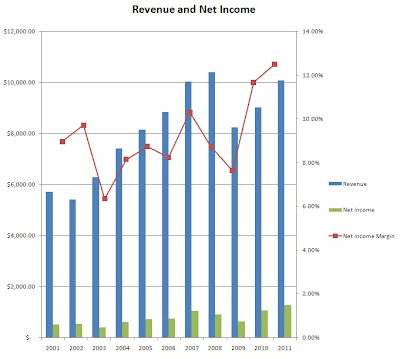 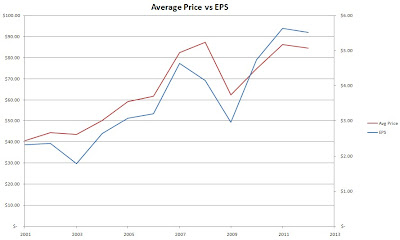 APD's average share price has been following the growth in EPS relatively closely since 2001, meaning it hasn't had much PE expansion or shrinkage. Currently APD is on the lower end of it's typical PE range. 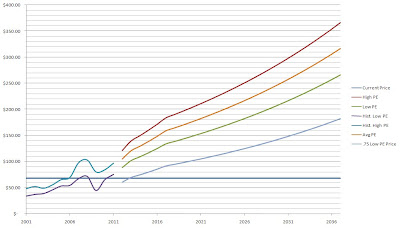 The chart shows the historical prices for the previous 10 years and the forecast based on the average PE ratios and the expected EPS values. I have also included a forecast based off a PE ratio that is only 75% of the average low PE ratio for the previous 5 years, 10 years or 16 whichever is least. I like to the look to buy at the 75% Low PE price or lower to provide for additional margin of safety. In this case the target PE is 10.98. This corresponds to a entry price of $60.52, meaning that APD is currently trading at a $19.91 premium to the forecast entry price. I think based of PE alone, the current price of $80.43 is a decent entry since it is trading on the lower end of it's normal PE.

The average of all the valuation models gives a fair value of $81.24 which means that Air Products & Chemicals is currently trading at a 1.00% discount to the average fair value.

There's still plenty of question marks about the economy as a whole and about the cash-to-debt and FCF of Air Products & Chemicals. I would be interested to see where APD comes in at on these issues with their earnings report due out on Tuesday. Improvement in these could mean that it's time to pick up some shares but at Friday's price I don't think you're getting a great value. I'm fairly conservative in my calculations meaning that their fair value is probably higher than what I've calculated, but there's way too many assumptions made to be very accurate. Given that they have increased dividends at a good rate while keeping their payout ratio low it could be a good investment years down the line. I would be tempted to get make a small purchase, probably a 1/4 position in APD and hope for a big pullback in the markets to give a better entry price. A 3.25% yield corresponds to a price of $78.77 and a 3.75% yield gives a price of $68.27. These would be undervalued to my calculated fair value by 3.04% and 15.96%. Another option is to try and sell puts to get a premium that would lower your cost basis. However, unless you can find a great put option with corresponding premium I'm not sure that would be the route I would take.
Email Post
Labels: stock analysis