As mentioned in my previous post, I'm going to try and have 1 stock analysis report for some popular dividend growth stocks come out prior to their latest earnings release this week. I was originally going to post about International Paper (IP) since it isn't as well known as the likes of ExxonMobil, however after beginning to compile my data I quickly decided against it because much more research into their recent acquisition of Temple-Inland would be required before I would feel comfortable investing. Today we'll look at Exxon Mobil Corporation (XOM). Exxon closed on Monday 7/23/12 at $85.21.

Exxon Mobil Corporation engages in the exploration and production of crude oil and natural gas, and manufacture of petroleum products, as well as transportation and sale of crude oil, natural gas, and petroleum products. The company manufactures and markets commodity petrochemicals, including olefins, aromatics, polyethylene and polypropylene plastics, and other specialty products. It also has interests in electric power generation facilities. As of December 31, 2011, the company operated 37,692 gross and 31,683 net operated wells. Exxon Mobil Corporation has a strategic agreement with the Rosneft Oil Company for investment into oil and gas fields in the Russia Federation. The company has operations in the United States, Canada/South America, Europe, Africa, Asia, and Australia/Oceania.

Analysts expect Exxon to grow earnings 8.95% per year for the next five years and I've assumed they can continue to grow at 3.50% per year thereafter. Running these numbers through a DCF analysis with a 10% discount rate yields a fair value price of $142.21. This means that at $85.21 the shares are undervalued by 40.1%. 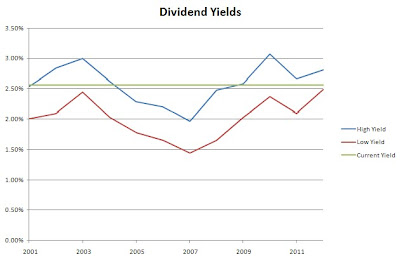 Exxon's gross margin for FY 2010 and FY 2011 was 29.13% and 27.13% respectively. Their gross margin is a little low for where I would prefer to see them at, but it has been pretty steady since 2001 with a low of 29.00% and a high of 41.60%. They have averaged a 35.70% gross margin since 2001. Their net income margin for the same years were 8.23% and 8.79% respectively. I like the net income margin to be at least 10% and preferably rising. Exxon is currently below where I like to see the net income margin be, but Exxon's lowest net income margin seems to be around the 6.40% area, which coincides with the years where oil and the economy as a whole tanked. Their cash-to-debt ratio for the same years was 0.64 and 1.36. If they keep their cash-to-debt ratio at 1.36 or higher then they will be in a very enviable position. 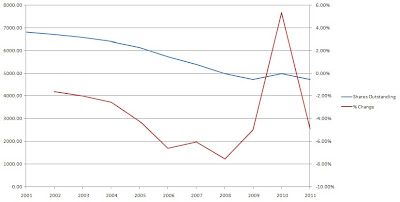 Exxon is a dividend contender with 30 consecutive years of dividend increases. Their current annual dividend sits at 2.68%. Exxon's annual increase for the last 1, 3, 5 and 10 years has been 17.84%, 9.51%, 9.74% and 9.01%. These numbers are different from the actual quarterly increases since these are based off the dividend paid out during each fiscal year. Their payout ratio has dropped from the 40/50% of earnings mark in 2001 and 2002 down to 22% for 2011. This is a good sign although I would prefer for them to get that up to a consistent 35% payout ratio. The average payout ratio since 2001 is 29.32% and has ranged from a low of 17.84% to a high of 54.76%. If they get their payout ratio from earnings closer to 35% that would be a better sign of shareholder friendliness. That has been the biggest complaint that I've seen of Exxon is that their yield is kept lower than competitors due to a low payout ratio. 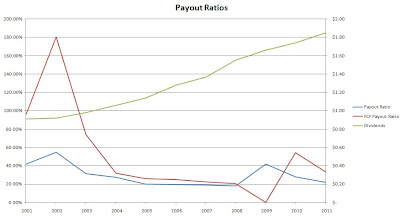 Their FCF per share looks great with a average of $3.46 in FCF since 2001. Their average FCF per share for the last 3 years is $2.86, although that includes 2010 where they had a -$0.17 per share. The FCF payout ratio is looking awesome although it has crept up in the last few years. Since 2001 they have average a 56.30% payout ratio versus FCF. Exxon generates huge amounts of free cash flow which is great since that is where you want dividends to come from. 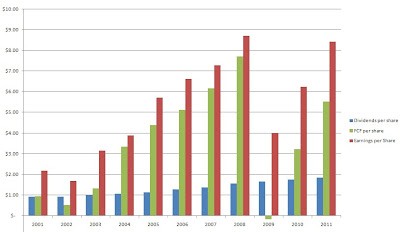 This chart showing their earnings, free cash flow and dividends per share is very telling of just how stable their dividend is. While their payout ratios are on the lower side of where I'd like to see them they are still paying a good dividend that continues to grow.

Exxon's ROE and ROCI typically will have several positive changes followed by one down year where it contracts. I would prefer to see a more consistent or increasing value for both. Thanks to the huge drop from 2008 to 2009 where both were more than cut in half they are up since 2001 but not nearly as much as the trend was showing. 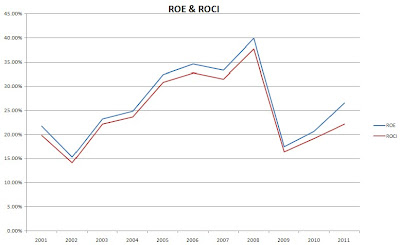 Since the basis of dividend growth is revenue and net income growth I've added a new section to my stock analysis. Here you can see XOM's history of revenue and net income since 2001. Their revenue took a big hit from 2008 to 2009, like most companies, but trended back higher since then and has already surpassed their revenue from 2008. Exxon's net income still isn't at the 2008 levels despite higher revenue which is a little concerning. That is due to their net income margin compressing. It was at 10.64% in 2008 and is down to 8.72% in 2001. 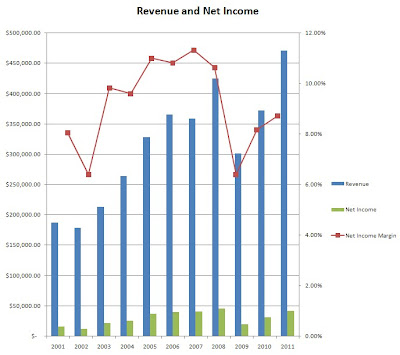 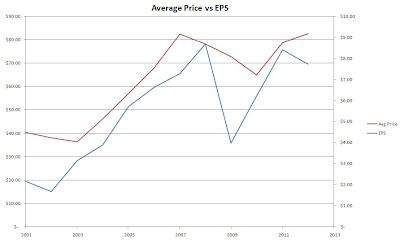 Exxon's average share price has been following the growth in EPS relatively closely since 2001 up until 2007. Since then they PE ratio has shrank causing a disparity in the growth rates of their share price and EPS growth. 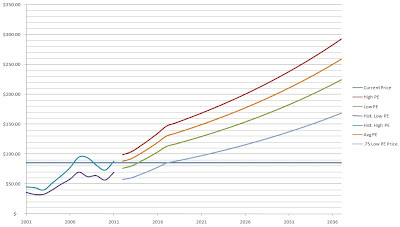 The chart shows the historical prices for the previous 10 years and the forecast based on the average PE ratios and the expected EPS values. I have also included a forecast based off a PE ratio that is only 75% of the average low PE ratio for the previous 5 years, 10 years or 16 whichever is least. I like to the look to buy at the 75% Low PE price or lower to provide for additional margin of safety. In this case the target PE is 7.38. This corresponds to a entry price of $57.15 based off the expected earnings for 2012. This means that Exxon is trading at a $28.06 premium to this price. I highly doubt you'll see a $57 entry price anytime soon unless the global economy tanks again which is very much possible due to all the issues in Europe.

The average of all the valuation models gives a fair value of $89.25 which means that Exxon is currently trading at a 4.5% discount to the average fair value. I've also calculated the fair value with the highest and lowest valuation methods thrown out. In this case, the DCF and DDM valuations are thrown out and the new average is $83.68. Exxon is trading at a 1.8% premium to this price.

After looking at everything Exxon is fairly valued right now and not a great bargain. Of course great companies you can rarely get a bargain bin prices. They have a great growth opportunity with natural gas after their purchase of XTO. Once natural gas prices return to at least a reasonable price Exxon will be there to capitalize on it. While Exxon is a great investment the biggest drawback that I see is that they are trading at a premium to the likes of Chevron and Shell, two of the other behemoths in oil and gas. They also have a lower dividend yield and lower payout ratios than both companies. If Exxon decides to get their dividend payout more in line with their competitors then they would be a standout investment. The 3.00% yield level is at $76.00 and the 3.25% yield level is $70.15.