As mentioned in my previous post, I'm going to try and have 1 stock analysis report for some popular dividend growth stocks come out prior to their latest earnings release this week. Today we'll look at RPM International (RPM). RPM International closed on Friday 7/20/12 at $27.24.

Analysts expect RPM to grow earnings 9.20% per year for the next five years and I've assumed they can continue to grow at 3.50% per year thereafter. Running these numbers through a DCF analysis with a 10% discount rate yields a fair value price of $31.91. This means that at $27.24 the shares are undervalued by 14.64%. 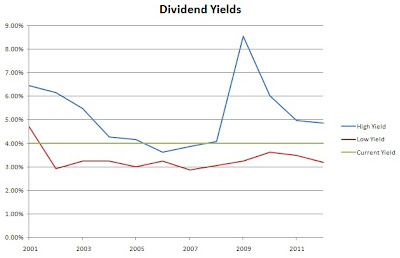 RPM's shares outstanding have been on a steady increase since 2001. Without looking further into the reason it would appear they are selling off company held shares to receive more funds or issuing a large amount as options for employees. Either way a stable share count is okay, but a rising share count is not good. 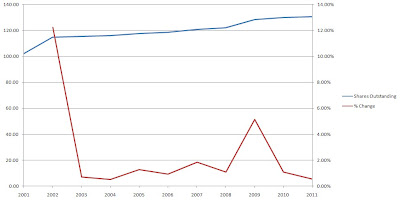 A negative number for the % change value means shares were bought back by the company and a positive value means the shares outstanding increased. As you can see, RPM hasn't bought back shares in one year since 2001. 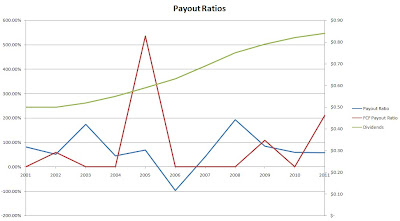 Their FCF is troubling as well. FCF per share has been positive only 4 years since 2001, and the years they have been positive it hasn't been enough to cover dividends. 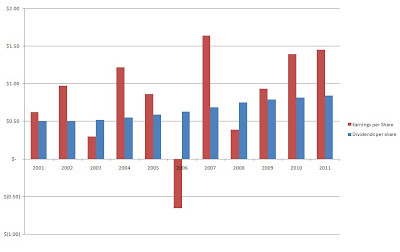 RPM's ROE and ROCI appear to be in at a low point in their cycle. It's okay given the nature of their business being a bit cyclical. Their lows so far have still been higher than the previous lows in the first few years of the 2000's. 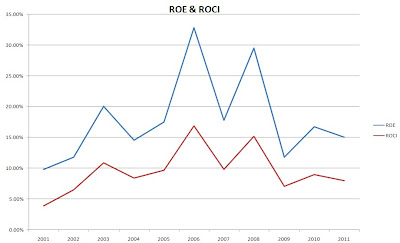 Since the basis of dividend growth is revenue and net income growth I've added a new section to my stock analysis. Here you can see RPM's history of revenue and net income since 2001. Their revenue growth is cyclical in nature and shows some possible signs of life. If things repeat as they did in the early 2000's now could be the chance to get into RPM after a few years of stagnant to slightly negative revenue growth. 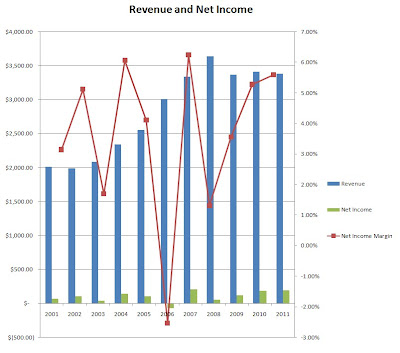 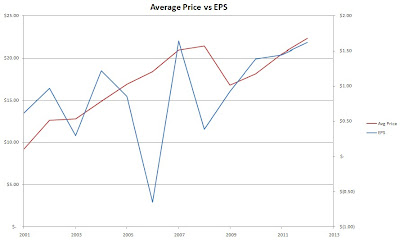 RPM's average share price has been following the growth in EPS over the last few years, meaning it hasn't had much PE expansion or shrinkage. 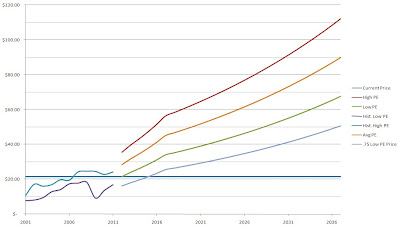 The chart shows the historical prices for the previous 10 years and the forecast based on the average PE ratios and the expected EPS values. I have also included a forecast based off a PE ratio that is only 75% of the average low PE ratio for the previous 5 years, 10 years or 16 whichever is least. I like to the look to buy at the 75% Low PE price or lower to provide for additional margin of safety. In this case the target PE is 9.91 which in my opinion is probably about right for a company that is currently having some pretty major issues. This corresponds to a entry price of $16.05, meaning that RPM is currently trading at a $11.19 premium to the forecast entry price.

The average of all the valuation models gives a fair value of $20.02 which means that RPM International is currently trading at a 36.1% premium to the average fair value.

Given the nature of the economy at this point in time I don't think RPM International is that great of an investment. They are currently overvalued against almost all standard valuation metrics. As a pure dividend play while they get things going again you get a decent 3.16% current yield but their dividend growth has been very low for much of the last decade. Their highest YoY growth was only 9.52%.

Unless you can get a 4.00% yield, $21.50 entry price, I think I would stay away for now. As $21.50 they would still be overvalued by 7.40%. While their dividend growth has been fairly low and things in general don't look that great at the company right now, they have been increasing dividends for 38 years. It could be a decent speculative play on the industrial market as a whole which has been beaten up lately. Once the economy rights itself it'll be too late to get in, but for now I would be passing on RPM International at the current prices. I would need to be rewarded much more than their current 3.16% yield to hold the shares.

At a 3.50% target yield you would need to buy at the $25.71 mark and for a 4.00% yield the purchase price would need to be $22.50. If Intel stays at current levels when I am able to purchase next month I'll be adding to my current position. And a further drop in tech or the markets as a whole could bring about the 4.00% yield level.
Email Post
Labels: stock analysis