As mentioned in my previous post, I'm going to try and have 1 stock analysis report for some popular dividend growth stocks come out prior to their latest earnings release this week. Today we'll look at Caterpillar Inc. (CAT). Caterpillar was trading on Monday 7/23/12 at $81.84.

Analysts expect Caterpillar to grow earnings 17.50% per year for the next five years and I've assumed they can continue to grow at 3.50% per year thereafter. Running these numbers through a DCF analysis with a 10% discount rate yields a fair value price of $249.63. This means that at $81.84 the shares are undervalued by 67.2%. 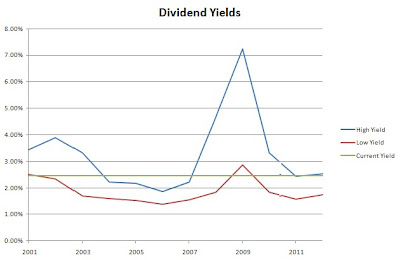 For the DDM I assumed that Caterpillar will be able to grow dividends for the next 5 years at the minimum of 15% or the lowest of the 1, 3, 5 or 10 year growth rates. In this case that would be 6.34%. After that I assumed CAT can continue to raise dividends by 3.50% annually and used a discount rate of 8%. Based on this CAT is worth $47.67 meaning it's overvalued by 71.7%

CAT's trailing PE is 10.32 and it's forward PE is 7.49. The PE3 based on the average earnings for the last 3 years is 18.92. I prefer for the PE3 to be less than 15, which in this case means that Caterpillar is currently overvalued. Compared to it's industry, CAT seems to be undervalued versus the industry as a whole (13.46). All industry comparisons are on a TTM EPS basis.

Caterpillar's gross margin for FY 2010 and FY 2011 was 34.09% and 31.74% respectively. While I would prefer for it to be higher, 30% is still a solid number and it has been very stable since 2001. Their gross margin has average 31.16% since 2001 with a high of 34.09% and a low of 28.40%. Their net income margin for the same years were 6.34% and 8.19% respectively. I like the net income margin to be at least 10% and preferably rising. Caterpillar is lacking in this area, and it seems like they might be at the high end of their net income margin. Typically it has ranged around 4% in lean years and 9% in fat years. This is pretty typical for Caterpillar seeing as how it is a very cyclical business. The cash-to-debt ratio for the same years were 0.18 and 0.12. Their gross profit and net profit margins had typically been greater than the industry as a whole, but for FY 2011 it dipped to only 81% and 65% of the industry's standards. 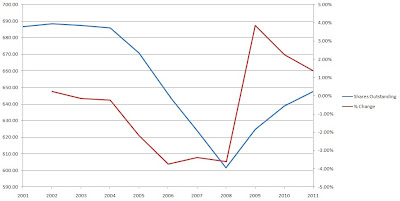 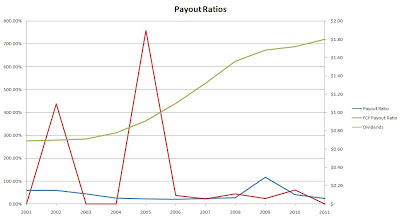 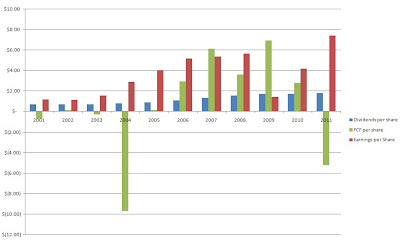 Caterpillar's ROE and ROCI had been in a uptrend through 2008, but 2009 brought a big cut and they still haven't returned back to pre-recession levels. If they can steadily improve these numbers that could be a good sign of things to come. 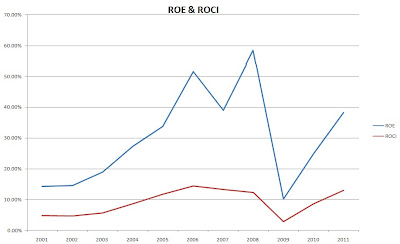 Since the basis of dividend growth is revenue and net income growth I've added a new section to my stock analysis. Here you can see CAT's history of revenue and net income since 2001. Their revenue took a big hit from 2008 to 2009 but has been trending upwards since then and for 2011 was actually higher than the 2008 level. In 2011, Caterpillar hit a high in net income. Since 2001 their net income has been in an ebb and flow cycle with about 3 years of low then 3 years of high, which is typical for a cyclical industrial equipment maker. 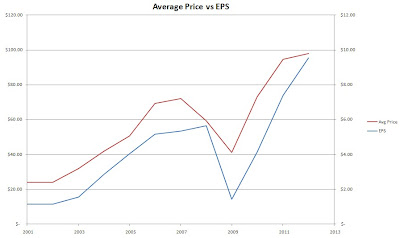 Caterpillar's average share price has been following the growth in EPS relatively closely since 2001 except for in 2012. This is good news for investors as it could mean that a PE expansion could be coming. Currently CAT is way below it's typical PE range. 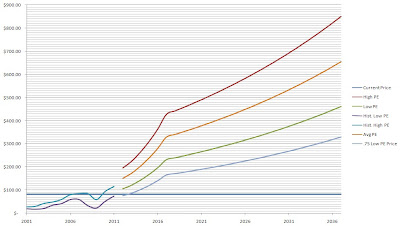 The chart shows the historical prices for the previous 10 years and the forecast based on the average PE ratios and the expected EPS values. I have also included a forecast based off a PE ratio that is only 75% of the average low PE ratio for the previous 5 years, 10 years or 16 whichever is least. I like to the look to buy at the 75% Low PE price or lower to provide for additional margin of safety. In this case the target PE is 7.94. This corresponds to a entry price of $75.73, meaning that CAT is currently trading at a $6.11 premium to the forecast entry price. I think based of PE alone, the current price of $81.84 is a decent entry since it is trading on the lower end of it's normal PE.

All in all Caterpillar appears to be an okay investment at these prices, but more for total return than as a dividend/income stock. Unless dividend growth severely ramps up it's not a good value at these prices. At the $77.96 fair value price your yield would be 2.67% which would be a spot where I would be okay with starting a position from a dividend standpoint, but a great entry from a total return stand. Especially if you feel that the global economy will be moving forward sooner than it takes another step back.