I can't believe I hadn't posted this before because Coca-Cola (KO) is one of my core holdings that I wish I could add more to and I really enjoy their product.  Coca-Cola closed trading on Friday, November 23rd at $37.93.

Analysts expect Coca-Cola to grow earnings 8.20% per year for the next five years and I've assumed they can continue to grow at 3.50% per year thereafter, slightly above the long term inflation rate. Running these numbers through a DCF analysis with a 10% discount rate yields a fair value price of $37.40. This means that at $37.93 the shares are overvalued by 1.4%. 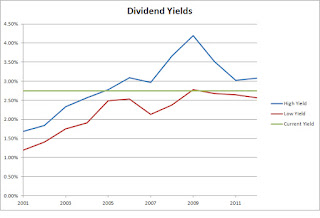 KO's average low PE ratio for the past 5 years is 14.70 and for the past 10 years is 17.02. This corresponds to a price per share of $29.40 and $34.05 respectively based off the analyst estimate of $2.00 per share for the fiscal year ending in December.  The 5 year and 10 year low PE price targets are overvalued by 29.0% and 11.4%, respectively.  Coca-Cola has typically traded for a PE ratio that is a premium to the market as a whole, so the 10 year average low PE ratio of 17 should be fairly typical of what you'll see KO trade for on a PE basis.

For the DDM I assumed that KO will be able to grow dividends for the next 5 years at the minimum of 15% or the lowest of the 1, 3, 5 or 10 year growth rates. In this case that would be 8.24%. After that I assumed they can continue to raise dividends for the next 5 years at 75% of 8.24%, or 6.19%, and by 3.50% in perpetuity.  The dividend growth rates are based off fiscal year increases and don't necessarily correspond to quarter over quarter increases.  To calculate the value I used a discount rate of 10%. Based on this, Coca-Cola is worth $20.96 meaning it's overvalued by 80.9%.

KO's gross margin for FY 2010 and FY 2011 were 68.0% and 65.1% respectively. They have averaged a 68.6% gross profit margin since 2001 with a low of 65.1% in FY 2011. Their net income margin for the same years were 33.6% and 18.4% respectively.  Since 2001 their net income margin has averaged 21.6% with a low of 18.2%.  I typically like to see gross margins greater than 60% and at least higher than 40% with net income margins being 10% and at least 7%.  Coca-Cola passes both with flying colors with a gross margin substantially higher than 60% and more than doubling my 10% target.  Since every industry is different and allows for different margins it's useful to compare Coca-Cola's margins to it's competitors.  KO captured 115.4% of the gross margin for the industry and 123.5% of the net profit margin for in fiscal year 2011.  These are both very promising because it shows that there is a high demand for their product and that cost increases in their materials can be passed to the consumer without jeopardizing the profits of the company.  Their cash-to-debt ratio for the same years were 0.71 and 0.52.  This is the only real blemish from a fundamentals perspective. 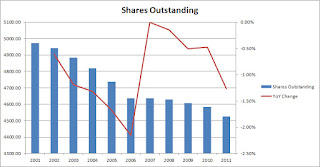 Coca-Cola is a dividend champion and recently hit 50 consecutive years of dividend increases. Their current annual dividend sits at $1.04 for a current yield of 2.74%. KO's annual increase for the last 1, 3, 5 and 10 years have been 10.64%, 8.24%, 8.87% and 10.03%. These numbers are different from the actual quarterly increases since these are based off the dividends paid out during each fiscal year.  Coca-Cola has one more payout this year with an ex-div date of November 28th and will pay out in December.  Their next dividend increase should come with the April 2013 payout.  Their payout ratio has increased slightly since 2001 but has averaged 51.60%.  The highest payout based off earnings was 60.80% in FY 2008.  Considering they've been growing the dividend at a 10% annual increase over the last 10 years, it's very nice to see that the payout ratio hasn't increased at the same rate. 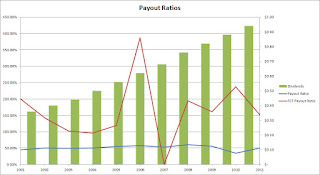 Their FCF per share is one of the biggest surprises for me while researching the company.  They've only had one year with negative FCF but have only once had a FCF payout ratio less than 100%.  I would like to see the FCF payout ratio come down because it will show that management is able to have more cushion for down years. 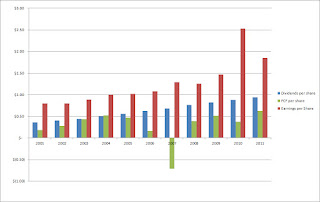 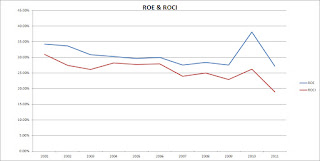 Since the basis of dividend growth is revenue and net income growth, we'll now look at how Coca-Cola has done on that front.  Their revenue growth since 2001 has been a respectable 8.76% per year but their net income has been growing at an 7.98% rate since 2001.  Since revenue has grown faster than net income their net income margin has retracted slightly.  Revenue has grown every year but two since 2001 with the down years being 2002 and 2009.  Both negative year-over-year comparison's saw revenue come in just slightly down with only 2.6% and 3.0% declines. 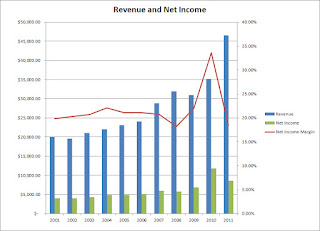 Coca-Cola's tangible book value per share leaves much to be desired with it decreasing between 2001 and 2011.  The first half of the period saw great growth and even up through 2009 it had increased a total of 47%.  However in 2010 it took a big hit and was essentially flat in 2011. The decrease is most likely to the purchase of bottling segment to control more of the operations.  This is something I'll be looking for when the FY 2012 annual report is released next year. 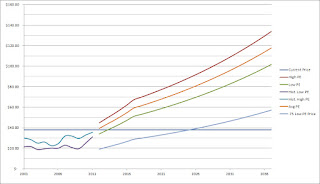 The chart shows the historical prices since 2001 and the forecast based on the average PE ratios and the expected EPS values. I have also included a forecast based off a PE ratio that is only 75% of the average low PE ratio for the previous 5 years and 10 years whichever is least.  Since I think the 10 year average low PE of 17 is going to be more typical for KO I'll use that number.  I like to the look to buy at the 75% Low PE price or lower to provide for additional margin of safety. In this case the target low PE is 17.02 and the 0.75 * PE is12.77 . This corresponds to a entry price of $34.05 and $19.15 based off the expected earnings for FY 2012 of $2.00.   Currently Coca-Cola is trading at a $1.50 discount and $18.78 premium to the target prices, respectively.  I don't think you'll see KO trading for a sub 13 PE ratio anytime soon.  Coca-Cola is 36% higher than the low PE price based on the range of valuations.

Overall I would say that Coca-Cola is currently a hold but if the price can pull back with the market over European or Middle East concerns or our own Fiscal Cliff mess then I would be ready to pick up some more shares around the $34 level.  That would be a 10% drop from current prices.  The 3.00% yield level is at a price of $34.67 and the 3.25% yield is at $32.00.  With a company as large and strong and stable as Coca-Cola you have to be willing to pay a premium to pick up shares and that shows in their historical averages.

What do you think about Coca-Cola as a DG investment at today's prices?
Email Post
Labels: stock analysis