I've been meaning to post some more stock analysis' so today we'll look at one of my recent buy's, Walgreen's.  On Friday, November 2nd, Walgreen's closed at $34.88.

Walgreen Co., together with its subsidiaries, operates a network of drugstores in the United States. It provides consumer goods and services, pharmacy, and health and wellness services through drugstores, as well as through mail, and by telephone and online. The company sells prescription and non-prescription drugs; and general merchandise, including household products, convenience and fresh foods, personal care, beauty care, photofinishing, and candy products, as well as home medical equipment, contact lenses, vitamins and supplements, and other health and wellness solutions. It also provides specialty pharmacy services for managing complex and chronic health conditions; customers infusion therapy services consisting of administration of intravenous medications for cancer treatments, chronic pain, heart failure, and other infections and disorders; and clinical services, such as laboratory monitoring, medication profile review, nutritional assessments, and patient and caregiver education. In addition, the company operates Take Care Clinics to treat patients, give prescriptions, and administer immunizations and other vaccines. As of October 30, 2012, it operated 7,944 drugstores in 50 states, the District of Columbia, and Puerto Rico, as well as approximately 700 worksite health and wellness centers, and in-store convenient care clinics in the United States.

Analysts expect WAG to grow earnings 12.47% per year for the next five years and I've assumed they can continue to grow at 3.50% per year thereafter, slightly above the long term inflation rate. Running these numbers through a DCF analysis with a 11% discount rate yields a fair value price of $64.03. This means that at $34.88 the shares are undervalued by 45.5%.

Walgreen's average high dividend yield for the past 5 years is 2.71% and for the past 10 years is 1.86%. This gives target prices of $40.64 and $59.10 respectively based on the current annual dividend of $1.10. These are undervalued by 14.2% and 41.0%, respectively. I feel that the 5 year average is going to be more typical of the high yield going forward since the typical yield range has been steadily increasing since 2001. 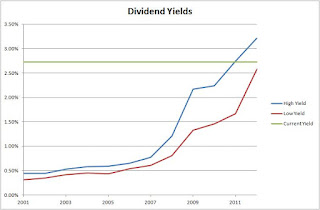 WAG's average low PE ratio for the past 5 years is 11.02 and for the past 10 years is 15.83. This corresponds to a price per share of $26.66 and $38.30 respectively based off the analyst estimate of $3.41 per share for the current fiscal year ending in August 2013.  The 5 year and 10 year low PE price targets are overvalued by 30.8% and undervalued by 8.9%, respectively.  I feel that in Walgreen's case the 5 year average PE ratio is going to be more typical of the range you will see going forward.

For the DDM I assumed that WAG will be able to grow dividends for the next 5 years at the minimum of 15% or the lowest of the 1, 3, 5 or 10 year growth rates. In this case that would be 15.00%. After that I assumed they can continue to raise dividends for the next 5 years at 75% of 15%, or 11.25%, and by 3.50% in perpetuity.  The dividend growth rates are based off fiscal year increases and don't necessarily correspond to quarter over quarter increases.  To calculate the value I used a discount rate of 10%. Based on this, Walgreen's is worth $34.53 meaning it's fairly valued%

Walgreen's trailing PE is 14.41 and it's forward PE is 9.35.  The PE3 based on the average earnings for the last 3 years is 13.99. I like to see the PE3 be less than 15 which Walgreen's passes at it's current price.  Compared to it's industry, WAG seems to be undervalued versus CVS (16.64) and WMT (15.34).  Against the industry as a whole, Walgreen's is undervalued with the industry carrying a PE ratio of 16.61.  All industry comparisons are on a TTM EPS basis.

WAG's gross margin for FY 2011 and FY 2012 was 29.9% and 30.0% respectively. They have averaged a 29.0% gross profit margin since 2001 with a low of 27.6% in FY 2002. Their net income margin for the same years were 3.76% and 2.97% respectively.  I typically like to see gross margins greater than 60% and at least higher than 40% with net income margins being 10% and at least 7%.  However, every industry is different and allows for different margins, WAG is in a lower margin industry so it pays to compare their values to that of their competitors.  Walgreen's gross margin is sitting at 115.4% of the industry and it's net profit margin is 146.2% of the industry's.  This is very good to see because it means that WAG is able to turn more pennies from every dollar of sales into profit.  Their cash-to-debt ratio for the same years were 0.65 and 0.32.  This is the only real blemish from a fundamentals perspective.

Walgreen's shares outstanding has decreased fairly consistently between 2001 and 2011 but crept back up by 6% between FY 2011 and FY 2012.  Despite the recent increase in shares outstanding they have averaged a 0.70% annual decrease since 2001.  As long as management can continue to decrease the share count I would just consider the last year a minor hiccup. 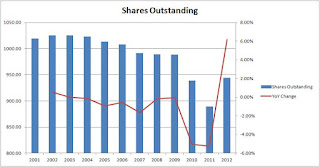 Walgreen's is a dividend champion with 37 consecutive years of dividend increases. Their current annual dividend sits at $1.10 for a current yield of 3.15%. WAG's annual increase for the last 1, 3, 5 and 10 years have been 15.79%, 23.08%, 23.69% and 22.05%. These numbers are different from the actual quarterly increases since these are based off the dividend paid out during each fiscal year.  The most recent dividend increase started with the 3rd quarter payout and was a 22% increase. Their payout ratio has slowly been increasing and for FY 2012 finished at 39.3%.  This a little worrisome but nothing to get overly excited about.  A 40% payout ratio still leaves plenty of room to increase the dividend.  I would like to see the payout ratio creep back down into the mid 30% range for the next fiscal year.  They have averaged a 19.5% payout ratio since 2001. 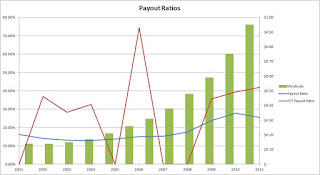 Their FCF per share has been awesome since 2009 where their FCF payout ratio has averaged only 43.6%.   The following chart is one of my favorite graphs to use to see the growth in dividends, free cash flow and earnings as well as their relative positions.  If WAG can continue to operate with dividends only eating up 40-50% of their FCF they will be setup to succeed and this will allow management to continue to increase dividends at a high rate. 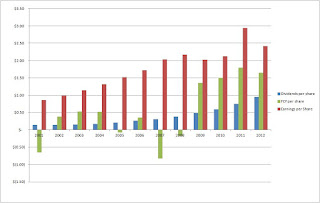 Walgreen's ROE has averaged 16.2% since 2001 with a low of 11.7% and a high of 18.4%.  Their ROCI is at a nice level as well averaging 15.4% since 2001 with a low of 9.5% and a high of 18.4%.  For both ROE and ROCI I don't necessarily look for any absolute values rather I like to see stable or increasing levels.  WAG's ROCI was the same as their ROE from 2001 to 2007 since they carried no debt, since then they have been taking on debt leading to the difference in the ROE and ROCI values.  This is a little worrisome but management seems to have taken on very manageable amounts of debt.  I would like to see both values increase back up to the mid-teen range to show that management is improving on their investments.  For the first three quarters for their FY 2012 ROE was 18.3%, 17.8% and 17.1% while ROCI was 15.8%, 15.3% and 14.7%.  I need to go through their latest annual report to determine why their ROE and ROCI decreased in the last quarter of FY 2012. 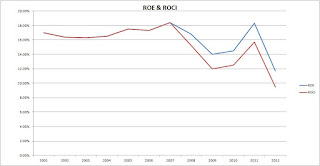 Since the basis of dividend growth is revenue and net income growth, we'll now look at how Walgreen's has done. Their revenue has been on a great growth trend with only one down year since 2001, which is the latest fiscal year.  This is very promising since they were able to increase revenue every year through the "Great Recession" and didn't hit any kind of speedbump along the way.  This is mainly due to the fact that the majority of their revenue comes from their pharamacies which is a recession proof industry since people need to take their doctor prescribed medications no matter how the economy is doing.  Since 2001 revenue has grown at a annual rate of 10.19%.  Since net income growth has been less than revenue growth their net profit margin has decreased from the highs of 3.80% in 2007 to the current 2.97% from FY 2012.  Net income has only grown at a 8.29% annual rate since 2001.  I would like to see management be able to increase their net income growth rate closer to the revenue growth rate but an 8%+ annual rate is still very impressive. 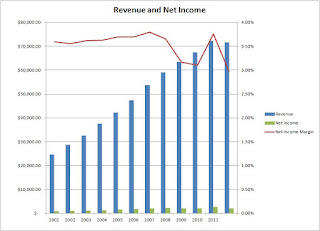 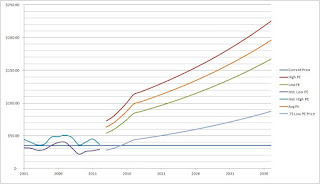 The chart shows the historical prices since 2001 and the forecast based on the average PE ratios and the expected EPS values. I have also included a forecast based off a PE ratio that is only 75% of the average low PE ratio for the previous 5 years, 10 years or 16 whichever is least. I like to the look to buy at the 75% Low PE price or lower to provide for additional margin of safety. In this case the target low PE is 15.83 and the 0.75 PE is 8.26. This corresponds to a entry price of $63.36 and $28.17 based off the expected earnings for 2013 of $3.41. This means that Walgreen's is trading at a $28.48 discount and $6.71 premium to the target prices, respectively.  I don't think you'll see Walgreen's trade for a sub 10 trailing PE ratio but it's forward PE based on FY 2013's expected earnings is 10.2.  Currently WAG is trading just under it's typical low PE ratio so it could be time to pick up more shares.  It is close to the 75% Low PE target price but I don't think you'll see that target hit either since back when the ExpressScripts issue came up Walgreen's only sold off to around $29.  That debacle is now behind them and they are moving forward.

Overall I would say that Walgreen's is currently a buy which is why I added to my position recently.  If the share price continues to decline then I will continue to add shares along the way since it is my largest position that is tied to the health care industry.  I would feel comfortable initiating a position at today's prices and would add on further dips.  The 3.25% yield point is at $33.85 and the 3.50% yield is at $31.43.  These would be 18.8% and 24.6% discounts to my fair value calculation.

What do you think about Walgreen's as an DG investment at today's prices?
Email Post
Labels: stock analysis