It's been a while since I've posted a stock analysis so today we'll look at the other beverage giant PepsiCo (PEP).  Pepsi was trading for $69.44 at mid-day yesterday.

Analysts expect PEP to grow earnings 4.25% per year for the next five years and I've assumed they can continue to grow at 3.50% per year thereafter, slightly above the long term inflation rate. Running these numbers through a DCF analysis with a 10% discount rate yields a fair value price of $66.23. This means that at $69.44 the shares are overvalued by 4.8%.

Pepsi's average high dividend yield for the past 5 years is 3.39% and for the past 10 years is 2.75%. This gives target prices of $63.45 and $78.27 respectively based on the current annual dividend of $2.15. These are overvalued by 9.4% and undervalued by 11.3%, respectively. I feel that the 5 year average is going to be more typical of the yield going forward since the typical yield range has been steadily increasing since 2001. 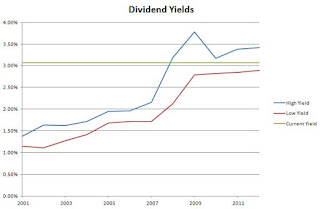 For the DDM I assumed that PEP will be able to grow dividends for the next 5 years at the minimum of 15% or the lowest of the 1, 3, 5 or 10 year growth rates. In this case that would be 4.80%. After that I assumed they can continue to raise dividends for the next 5 years at 75% of 4.80%, or 3.60%, and by 3.50% in perpetuity.  The dividend growth rates are based off fiscal year increases and don't necessarily correspond to quarter over quarter increases.  To calculate the value I used a discount rate of 10%. Based on this, Pepsi is worth $34.57 meaning it's overvalued by 100.9%

Pepsi's trailing PE is 18.47 and it's forward PE is 15.75.  The PE3 based on the average earnings for the last 3 years is 17.79. I like to see the PE3 be less than 15, but PEP has historically been granted a premium based on the PE ratio.  Compared to it's industry, PEP seems to be fairly valued versus KO (19.50) and overvalued versus DPS (14.85).  Against the industry as a whole, Pepsi is slightly undervalued with the industry carrying a PE ratio of 20.92.  All industry comparisons are on a TTM EPS basis.

PEP's gross margin for FY 2010 and FY 2011 was 57.9% and 56.4% respectively. They have averaged a 58.4% gross profit margin since 2001 with a low of 56.4% in their most recent fiscal year. Their net income margin for the same years were 10.9% and 9.7% respectively.  I like to see gross margins greater than 60% and at least higher than 40% with net income margins being 10% and at least 7%.  Pepsi is right on the cusp of the high ends for both gross and net margin.  Margins are different across all industries and Pepsi is right around 100% of the gross margin for the industry but lacking in the net profit margin capturing only about 2/3rds of the industry level.  This is mainly due to the fact that Pepsi is not a pure play for the beverage industry with a large portion of their sales and profit coming from the lower margin snacks business.  Their cash-to-debt ratio for the same years were 0.20 and 0.30.  Unfortunately the cash-to-debt position worsened between FY 2010 and FY 2011.  I would like to see them make some headway on this front.

Pepsi's shares outstanding had decreased consistently between 2001 and 2008 but are currently above the levels from 2008.  Despite the recent stagnation in shares outstanding they have averaged a 1.05% annual decrease since 2001.  In FY 2011 they were able to continue decreasing their shares outstanding with another 1.08% decline.  As long as management can continue to decrease the share count I would just consider the last few years a minor hiccup. 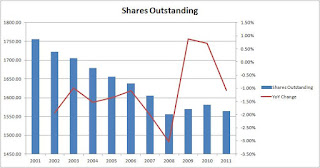 Pepsi is a dividend champion with 40 consecutive years of dividend increases. Their current annual dividend sits at $2.15 for a current yield of 3.10%. PEP's annual increase for the last 1, 3, 5 and 10 years have been 4.80%, 6.12%, 9.52% and 13.68%. These numbers are different from the actual quarterly increases since these are based off the dividend paid out during each fiscal year. Their payout ratio has slowly been increasing and has been around the 50% level for the past 4 fiscal years.  Since 2001 they have averaged a 40.52% payout based on earnings.  If the analyst estimates are correct then PEP will be paying out 52.5% of their earnings in dividends for FY 2012 which would be the highest ratio since 2001.  While the payout ratio has been increasing it's still not in the danger zone with plenty of room for further increases.  I would like to see the EPS growth increase since a company cannot continue to increase dividends at a rate higher than earnings forever. 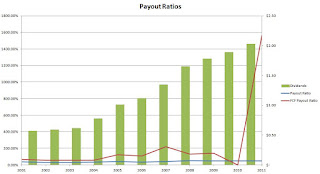 Their FCF per share was great between 2001 and 2004 but since then dividends have exceeded the FCF.  The following chart is one of my favorite graphs to use to see the growth in dividends, free cash flow and earnings as well as their relative positions.  This is definitely something to check into further before investing with Pepsi. 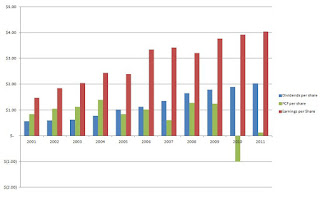 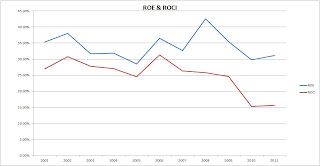 Since the basis of dividend growth is revenue and net income growth, we'll now see how Pepsi has done. Their revenue has been on a great growth trend with only one down year since 2001. Over that time revenue has grown at a CAGR of 9.46%.  Net income has grown at an annual rate of 9.24% since 2001.  Since net income growth has been less than revenue growth their net profit margin has decreased from the highs of 16% in 2006 to the current 9.7% from FY 2011.  Management has done a great job increasing revenue but needs to focus more on being able to turn more pennies into profit from every dollar they bring in. 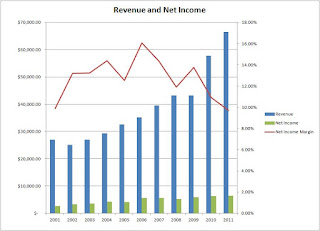 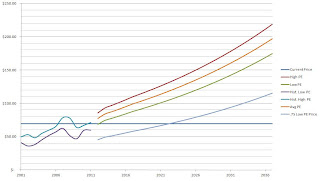 The chart shows the historical prices for the previous 10 years and the forecast based on the average PE ratios and the expected EPS values. I have also included a forecast based off a PE ratio that is only 75% of the average low PE ratio for the previous 5 years, 10 years or 16 whichever is least. I like to the look to buy at the 75% Low PE price or lower to provide for additional margin of safety. In this case the target PE is 16.86 and the 0.75 PE is 11.11. This corresponds to a entry price of $77.08 and $45.10 based off the expected earnings for 2012 of $4.06. This means that Pepsi is trading at a $7.64 discount and $24.34 premium to the target prices.  I don't think you'll see Pepsi trade for a PE of 11 unless the stock market takes a very big fall.  That would be a 40% drop from current prices.  Currently Pepsi is trading right at it's typical low PE ratio so based on that it is undervalued.

Overall I would say that Pepsi is fully valued at today's prices and doesn't leave much room for a margin of safety.  I would feel better about initiating a position with Pepsi with a higher starting yield in order to compensate for the potential roadblocks ahead.  A 3.50% yield corresponds to a price of $61.43 which would bring the starting value much closer to my fair value calculations.  One caveat is that most of my calculations have a built in margin of safety and then I usually look for a margin of safety from the average of the valuation models.  If revenue and therefore earnings growth can increase, then the dividend growth will follow.  Pepsi is a great company with great future prospects, especially in China with YUM Brands continued expansion there, but the value just isn't there at today's prices for me.  If you're interested in investing with Pepsi, then I would suggest looking at selling put options to try and get lower prices and at least get paid to wait.  The only downside is that Pepsi is such a large company that the premiums will tend to be lower.

What do you think about PepsiCo as an DG investment at today's prices?
Email Post
Labels: stock analysis