I'm trying to get ahead of the game on my stock analyses, so here's the first one for March.  I'll be looking at the industrial giant Illinois Tool Works (ITW).   They are a dividend champion with 49 consecutive years of increasing dividends.  This is pretty rare territory.  Illinois Tool Works closed trading on Monday, March 11th at $61.26.

Analysts expect Illinois Tool Works to grow earnings 8.77% per year for the next five years and I've assumed they can continue to grow at 3.50% per year thereafter. Running these numbers through a two stage DCF analysis with a 10% discount rate yields a fair value price of $82.96. This means the shares are trading at a 24.7% discount to the DCF.

Illinois Tool Work's average high dividend yield for the past 5 years is 3.61% and for the past 10 years is 2.61%. This gives target prices of $42.13 and $58.14 respectively based on the current annual dividend of $1.52.  I think the 10 year average yield might be a little low but although the 5 year is also skewed higher due to the great recession plummeting the share price.  It yielded as high as 4.63% during 2009.  I think you'll start to see the average yield to be closer to the 2.60-2.80% range going forward, but we'll use the 5 year average high yield to determine the fair value to be conservative.  Illinois Tool Works is currently trading at a 48.3% premium to the average high dividend yield valuation. 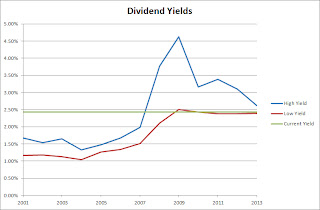 For the DDM, I assumed that ITW will be able to grow dividends for the next 5 years at the minimum of 15% or the lowest of the 1, 3, 5 or 10 year growth rates. In this case that would be 5.71%.  After that I assumed they can continue to raise dividends for 3 years at 75% of 5.71% or 4.29% and in perpetuity at 3.50%.  The dividend growth rates are based off fiscal year payouts and don't necessarily correspond to quarter over quarter increases.  To calculate the value I used a discount rate of 10%. Based on this, ITW is worth $25.72 meaning it's overvalued by 143.0%.

ITW's shares outstanding have been in an overall downtrend with an average decrease of 2.63% per year since 2001.  Over that time they've bought back 25.4% of their shares outstanding.  By repurchasing shares, ITW is able to increase EPS and management can return cash to shareholders this way by increasing the ownership stake of the company for all the outstanding shares.  Seeing how lumpy the share buybacks have been, on the surface it seems that management has been selectively repurchasing shares based on their belief of it being undervalued.  More research would be needed to check on this. 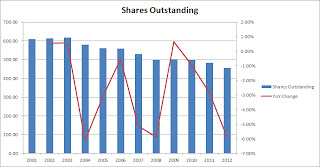 Illinois Tool Works is a dividend champion with 49 consecutive years of increases with their next increase marking 50 years.  Their current annual dividend sits at $1.52 for a yield of 2.43%.  ITW's annual increases for the last 1, 3, 5 and 10 years has been 5.71%, 6.08%, 10.22% and 12.64%.  These numbers are different from the actual quarterly increases since they are based off the dividends paid out during each fiscal year.  Their payout ratio has averaged 32.6% since 2001, peaking in 2009 with a 65.6% ratio.  Having a low payout ratio leaves more room for management to increase the dividend without overly burdening the underlying business. 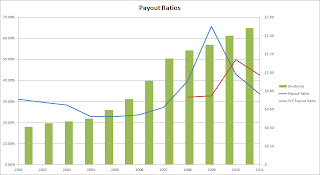 Illinois Tool Work's free cash flow per share has been great since FY 2008 with dividends only taking up an average of 41.6% of the available FCF.  I am a little concerned that the total shareholder return, share buybacks plus dividends, has averaged 98.2% since FY 2008.  They've still managed to increase their cash per share though. 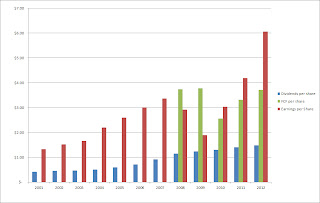 Since the basis of dividend growth is revenue and net income growth, we'll now look at how ITW has done on that front.  Their revenue growth since 2001 has done fairly well at 6.2% per year and their net income has been growing at a 12.2% rate.  Since their net income has been growing faster than revenue, their net income margin has increased from 8.7% to 16.0% between FY 2001 and FY 2012.  Over that time, ITW only suffered a decline in revenue and net income during FY 2008 and FY 2009 but has grown every other year.  Considering how tied they are to the strength of the economy, this isn't troubling.  I love seeing the net income on a steady rise because it means the company is turning more dollars of sales into profits. 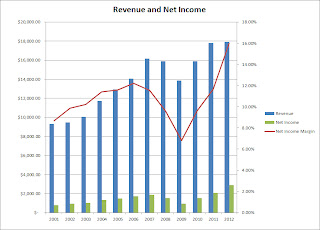 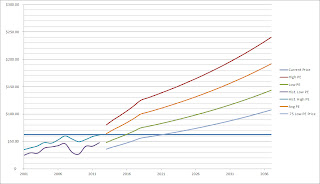 The chart shows the historical high and low prices since 2001 and the forecast based on the average PE ratios and the expected EPS values. I have also included a forecast based off a PE ratio that is only 75% of the average low PE ratio for the previous 5 years.  I like to the look to buy at the 75% Low PE price or lower to provide for additional margin of safety. In this case the target low PE is 11.19 and the 0.75 * PE is 8.39.  This corresponds to an entry price of $35.92 based off the expected earnings for FY 2013 of $4.28. The average PE price would give a target price of $64.03.  Currently ITW is trading at a $26.57 premium to the 75% low PE target price and a $1.54 discount to the average PE price.  I highly doubt that we'll see ITW trading for a PE ratio around 8.5 unless another recession is in the works.

The average of all the valuation models gives a target entry price of $49.65 which means that Illinois Tool Works is currently trading at a 25.9% premium to the average.. I've also calculated it with the highest and lowest valuation methods thrown out.   In this case, the DCF and DDM valuations are removed and the new average is $47.31.  ITW is trading at a 32.1% premium to this price as well.

Overall, I would say that Illinois Tool Works is currently fairly valued.  With an improving economy, ITW will come along for the ride.  They've been through several recessions and other macro issues before and come out unscathed and I expect them to continue doing so.  Their dividend growth is a little lumpier than most dividend growth companies, but that's due to the cyclical nature of their business.  When the economy is humming along, the dividend growth follows.  In FY 2005 through 2008 they averaged 23.22% annual dividend (arithmetic average) increases but they also saw very poor growth in 2008 and 2010.  With ITW it's hard to purchase when the economy is doing great.  I expect the dividend growth to be higher than normal over the next few years as the economy gets back on track.

Using the historical dividend yield, PE, and PS ratios, the average valuation or fairly valued price would be around $60.89 and the high valuation price would be $72.36.  It's currently trading right around the fair valuation price which I feel is about right.  A dip down to around $57 would get me interested in initiating a position but I would need a pretty big drop to work on getting a full position.  The markets have seen very little volatility and resistance in their march up to record highs so far this year.  I think both of those are likely to change, and if anything maybe the "Sell in May and go away" will give us some opportunities.

Some other links to stock analysis on Illinois Tool Works can be found here and here.

What do you think about Illinois Tool Works as a DG investment at today's prices?
Email Post
Labels: stock analysis