I knew February would end up being a pretty good month with high than normal income and the profit sharing from my employer hitting my 401k.  Considering the markets didn't have a repeat 5-6% gain, I got pretty close to topping January's personal record.  I had about $1,200 in combined 401k contributions and just under $900 in ESPP withholdings.  The biggest contributors for the monthly gain were the profit sharing of $4,500 and February net savings over $7,100. 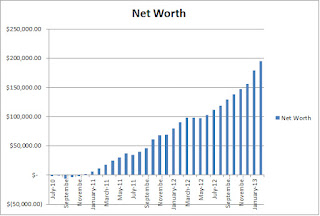 I decided to also add one more chart to my monthly updates.  This chart will show the number of years that my liquid assets, essentially cash/checking/savings/brokerage accounts, would last based on the spending for the corresponding month.  For February, this number came to 5.74 years.  Not bad considering 2.5 years ago I had a negative net worth. 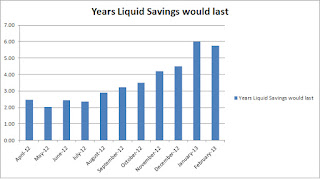 How was your February?  Did you do better or worse than you expected this month?
Email Post
Labels: financial independence net worth