Third analysis of the week is now up.  I previously looked at Dr. Pepper Snapple Group and International Business Machines, and now we'll move on to a financial services firm, Automatic Data Processing.  It feels good to get back to analyzing stocks and learning as much as I can.  The more you learn and study and practice the better you'll get.  Investing is a skill as much as an art.  ADP closed trading on August 13th at $72.99.

Analysts expect ADP to grow earnings 9.67% per year for the next five years and I've assumed they can grow at 2/3 of that, or 6.45%, and continue to grow at 3.50% per year thereafter. Running these numbers through a three stage DCF analysis with a 10% discount rate yields a fair value price of $66.31. This means the shares are trading at a 10.1% premium to the discounted cash flow analysis.

The Graham Number valuation method was conceived of by Benjamin Graham, the father of value investing, and calculates the maximum price one should pay for a company given the earnings and book value.  ADP earned $2.89 per share in the last twelve months and has a current book value of $12.82.  The Graham Number is calculated to be $28.87, suggesting that ADP is overvalued by 152.8%. 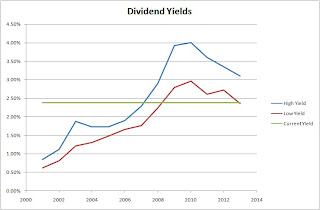 ADP's average low PS ratio for the past 5 years is 2.09 and for the past 10 years is 2.28.  This corresponds to a price per share of $55.23 and $60.23 respectively based off the analyst estimate for revenue growth from FY 2012 to FY 2013.  Currently, their current PS ratio is 3.11 on a trailing twelve months basis.  Both ratios are relatively close so I'll use the 5 year ratio just to be conservative.  ADP is currently trading at a 32.2% premium to this price.

ADP's trailing PE is 25.26 and it's forward PE is 20.91.  The PE3 based on the average earnings for the last 3 years is 26.61.  I like to see the PE3 be less than 15 which ADP is currently well over.  Part of this is due to lower earnings coming out of the recession but it still seems it's price has gotten a bit ahead of itself.  Compared to it's industry, ADP seems to be overvalued versus NSP (22.80) and undervalued versus PAYX (25.35).  All industry comparisons are on a TTM basis.  ADP's PEG for the next 5 years is currently at 2.38 while NSP is at 1.43 and PAYX is at 2.37.  Based on the PEG ratio, ADP is overvalued versus Insperity but even against Paycheck.  A lower PEG ratio is better because it means you're paying less for every dollar of growth the company achieves.

ADP has shown a tendency to repurchase shares as a way to return cash to shareholders.  Since FY 2002, they've purchased 22.0% of their shares outstanding for an average annualized decrease of 2.45%.  Buybacks are great as long as they are purchasing shares at a value price point, otherwise they are reducing shareholder value through the buyback program.  Looking at the historical data, they increased their buyback program during FY 2006-08 which just glancing at doesn't seem like it was the best time as shares on average weren't trading at bargain prices although it was around their historical norms. 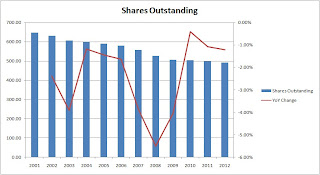 ADP is a dividend champion with 38 consecutive years of dividend increases.  They have increased the dividend at a 9.68%, 7.99%, 9.10%, and 13.48% rate for the last 1, 3, 5 and 10 year periods.   Their payout ratio based off EPS has increased since FY 2002 which has allowed the dividend to increase faster than EPS have grown.  I expect it to track closer to EPS growth going forward although with over 9% projected EPS growth for the next 5 years you could still see solid growth of the dividend.  Since FY 2002 the payout ratio has increased from 28.6% to 55.0% and has averaged 43.0% over that time. 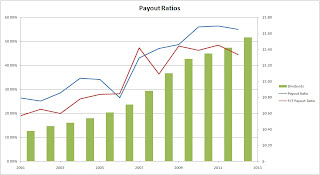 ADP is a very solid cash generator.  They have very low required capital expenses which has allowed them to turn 84% of their operating cash flow into free cash flow to the company.  Their free cash flow has grown from $1.276B in 2002 to $1.660B in 2012, good for a 2.7% annualized increase.  The free cash flow payout ratio has averaged only 38.7% since FY 2002, which is about 4.5% less than the payout based on earnings.  For FY 2012 their FCF payout ratio was only 45.9% which was around 9% less than their earnings payout.  Annual total shareholder return when accounting for buybacks plus dividends has averaged 111.9% of FCF since FY 2003.  If you exclude FY 2006-2008 when the buyback program was increased, the average drops to 88.6%.  I really like that management is willing to return around 100% of their free cash flow to shareholders. 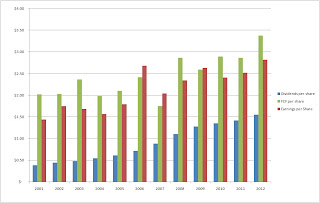 ADP earns a very solid ROE averaging 21.8% over the last 10 years.  Their ROCI has been solid as well averaging 21.5%.  The difference is due to the debt that ADP has, but it's a very negligible amount of debt.  I don't necessarily look for any absolute values for ROE or ROCI but rather fairly stable or increasing levels.  ADP has done a great job of earning consistent returns on equity and invested capital as well as being able to increase it over time as well.  Due to the negligible debt that ADP carries their debt-to-equity ratio is essentially zero.  Their balance sheet is pristine and I don't expect that to change anytime soon as their operations require very low capital expenditures and almost no inventory.

Since the basis of dividend growth is revenue and net income growth, we'll now look at how ADP has done on that front.  Their revenue growth since 2002 has been decent with a 4.46% annual increase while their net income has only grown 2.35% per year.  This has led to their net profit margin decreasing over time but I expect it to start trending back higher.  Analysts expect great revenue growth over the next two years of 7.10% and 7.60%.  If those come to pass then ADP will be in an even better situation than they are now. 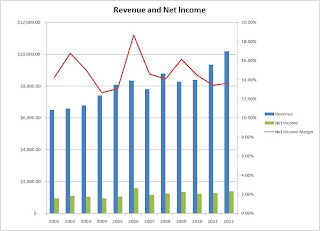 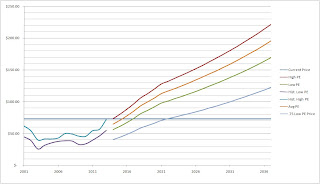 The chart shows the historical high and low prices since 2001 and the forecast based on the average PE ratios and the expected EPS values. I have also included a forecast based off a PE ratio that is only 75% of the average low PE ratio.  I like to the look to buy at the 75% Low PE price or lower to provide for a larger margin of safety, although this price doesn't usually come around very often. In the case of ADP, the target low PE is 16.04 and the 0.75 * PE is 12.03.  This corresponds to an entry price of $54.74 based off the expected earnings for FY 2013 of $3.16, with a 75% target price of $36.68.  Currently ADP is trading at a $36.31 premium to the 75% low PE target price and a $14.51 premium to the average PE price.  If you believe the analyst estimates are pretty close, then ADP is trading right around it's fair value range.

The average of all the valuation models gives a target entry price of $49.26 which means that ADP is currently trading at a 48.2% premium to the target entry price. I've also calculated it with the highest and lowest valuation methods thrown out.   In this case, the DCF and Graham Number valuations are removed and the new average is $50.09.  ADP is trading at a 45.7% premium to this price as well.

According to Yahoo! Finance the 1 year target estimate is at $74.66 suggesting only about 2.3% upside from recent prices.  Morningstar has PM rated as a 2 star stock meaning it's a hold and should provide subpar returns going forward.  This has nothing to do with the company or the potential for growth, rather it's based off it being very richly valued.

If you believe in the long term growth of the economy and subsequent improvement in the employment levels then ADP is a great company to invest in.  One of the things I like the most about ADP is that for companies that it provides payroll processing services to; they receive enough cash beforehand to cover all paychecks and still have a buffer, but ADP gets to put that money in an interest bearing account.  As the economy improves and interest rates rise, ADP could get to reap more service charges as larger amounts of people are being employed and also earn higher rates on that cash.  Another great thing about ADP is that it's very hard, especially for large companies, to change their HR service company or payroll processor without potentially causing problems for their employees.  This leads to very little turnover in ADPs customers which means fairly predictable performance from ADP from year to year.

While I believe in the tailwinds that can lead to growth of ADP and in turn its' dividend, the stock is just too rich at this point in time.  The average valuation based off dividend yield, P/E ratio and P/S ratio gives fair value price target of $62.16.  This would require around a 15% pullback from current levels.  I would certainly welcome this because ADP is one of those companies with a great business model and really sticky services.  Their performance is going to be tied to the economy as a whole so eventually there will be another opportunity to become a part owner in this great company.  I would probably shy away from selling puts on ADP because the price is just too far away from even the fair value price.  If there happens to be a 7% pullback then I'd consider selling puts as a way to enter a position, but until then I'll just keep looking for other opportunities.

What do you think about Automatic Data Processing as a DG investment at today's prices?  How do you think the long-term dividend growth prospects are?
Email Post
Labels: stock analysis