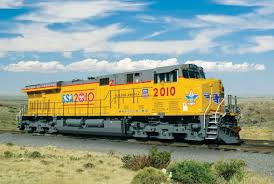 Back in October I mentioned how we were going to be in a lower tax bracket this year compared to last year and most years going forward.  We're dropping from the 28% tax bracket all the way to the 15% bracket because of much lower income this year.  Going forward I expect us to be in the 25% tax bracket in most years so it makes sense to try and take advantage of the lower rates while we can.  As such it would make sense to maximize our capital gains this year since we would pay 15% on short term gains and 0% on long term compared to the expected 25% and 15%.

There's a lot of factors that go into the decision making process when considering whether the harvest tax losses or not.

One holding that I'm considering doing tax loss harvesting on is Union Pacific (UNP).  I originally purchased 2 different lots of Union Pacific at much higher prices in June of this year at $101.81 and $97.49 per share cost basis', respectively.  The current share price is down at $83.99 which means the position is sitting on a 15.87% short term capital loss.  I have received one dividend payment though that helps to ease the sting slightly that bumps the total return to just a loss of 15.32%.

I don't want to let anything other than company fundamentals influence my decision, but seeing that kind of loss, with the opportunity to improve the situation, is something that catches my attention.  The way I see it there's 3 options.  1) I can do nothing and collect my dividends in cash. 2) I can do nothing and reinvest dividends back into the company at better prices. 3) I can purchase shares at current prices and sell some of the expensive shares in order to capture the loss on the taxes this year. 4) I can sell out completely and move on to other opportunities.

Option 4 isn't really appealing to me because I'm very bullish on the railroads over the long term.  The entire industry is an oligopoly with just a few major players.  Plus rail is too efficient of a means for transporting large quantities of goods over long distances to see it disappear.

So that leaves me with options 1, 2, and 3.  One and two are essentially the same thing except I could I would be building up my position by reinvesting dividends as opposed to collecting the dividends in cash.

Option 3 is the trickiest to figure out.  The company is facing lots of headwinds with pretty much every segment seeing declines throughout the year.  Coal, grains, oil, heavy goods.  Everything has significant short term headwinds with some facing long term headwinds, namely coal and the declining use of it for energy production.  Oil could also be an issue because once pipelines are put in place they are far superior to rail, so oil transport will only return if new fields are discovered that don't currently have pipelines nearby or the existing pipelines are at full capacity.  That's a troublesome spot to be in; however, I think these things will work themselves out over time whenever the economy gets moving forward again.

I wanted to run through a current valuation analysis using the analyst forecast to see what kind of return could be generated.  The following table shows the current analyst estimates for earnings per share through 2017.  In order to get an estimate for 2018 I used 3.0% growth for the low earnings estimate and 5.0% growth for the mean estimate.  I also came up with estimates assuming just 3.0% annual earnings growth starting from the mean estimate of 2015 earnings.

If the average analyst estimate for earnings per share is hit then investors at current prices would be in line to reap big rewards.  Morningstar has the 5 year average P/E ratio for Union Pacific at 17 although currently the ratio has dipped to 14.6.  The following table shows the cash flows if you purchased shares yesterday at $83.99. 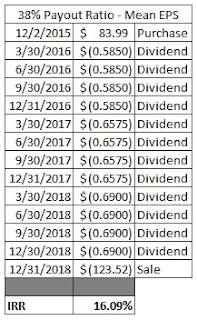 The problem is that this assumes a purchase of new shares at the price of $83.99 but I already own shares.  The shares I own have an average cost basis of $99.83.  The mean earnings 17x 2018 earnings return drops to just 9.6% while the 3% conservative growth 14x 2018 earnings scenario would actually show a 1.2% annualized loss.

Since I expect to be in a higher tax bracket for 2016's taxes I'd be able to reap the most benefit by purchasing replacement shares now and then selling sometime in January.  The downside is that requires that capital to be locked up until I can sell 30 days later which keeps it from being put to other use.

There's also the issue of anticipated share price movement and the timing of that movement.  I don't consider myself a market timer at all and honestly have no idea where the share price will be tomorrow let alone 30 days from now.  I don't see many catalysts for the share price to return to anywhere close to my current cost basis over the next 30 days so there's the very real possibility to at least make an improvement on the cost basis for my position.

As you can see there's a whole lot of things to consider before making a move like this just to harvest some tax losses.  Especially since if I liquidated my whole position I'd only be looking at around $420 of loss which leads to about $60 worth of tax savings.

I've added a questionnaire I'd love for you to answer if you don't mind sharing your thoughts on this situation.