October was great for the net worth and November followed up with a very meh month.  The S&P 500 was essentially flat for the month which meant changes were primarily made via savings.  Unfortunately there wasn't much on the savings front due to me forgetting about our homeowner's insurance bill being due. which took away pretty much all the investment capital.  The majority of our net worth is tied to the performance of the stock market so a break from the roller coaster of the last few months was welcomed  The good news though is that the market changes are just noise to try and get your emotions to make you do something foolish.  It's the dividends that help to keep you sane when the markets are crazy or even boring.  Dividends are always a positive portion of return and in November we ended up with over $420 in dividends received.

Even better was the THREE dividend increases announced during the month.  That's extra money for doing nothing and I'm way okay with that.

As I mentioned above, November was a pretty blah month for my net worth.  The $12.46 decline from October's total ended up being a 0% change month over month and a I'm still sitting at a 1.1% decline from the end of 2014.

It's taken a while to try and figure out what expenses we have coming up that we would normally save for on a monthly basis and it seems like there's always something else that keeps popping up.  We're also in the middle of transitioning to primarily a one income family right now, although my wife is subbing in schools a few times a week.  The transition as well as expenses that were forgotten about have led to a less than stellar cash flow situation but I think we might finally be on top of everything now that November is behind us.  Of course I've thought that for the past couple months so who knows.  We still need to save up for our property taxes which will be due by the end of January so investment capital is likely going to still be light until then which is a shame because I'm ready to invest and still see some solid values in the markets.

I don't see the point in paying extra on the mortgage at this time given our relatively low interest rate and think we'll come out much further ahead investing the extra cash flow.  So the liabilities side of the net worth equation will be slow moving.  However, once the FI portfolio is able to get to a self-sustaining level of dividends then I'll plan to aggressively pay down the mortgage.  As of the end of November we have 22.75% equity in our house.  Also, according to Zillow our house has increased just over $10k in value from our purchase price although I'm just using our purchase price in my net worth calculations. 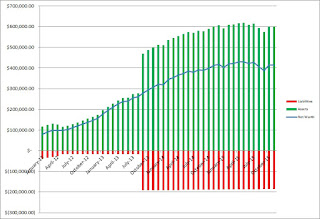 Truly passive income, dividends and interest, amounted to $422.50 during November which covered 7.5% of my monthly expenses.  Including the income earned from blogging/writing adds another $396.06 to the total bring my total non-day job income to $818.56.  That covered 14.5% of expenses for November.

How did your net worth fare in November?  Are you set up to have a solid last month of 2015?