Yesterday the Board of Directors at Wal-Mart Stores (WMT) approved an increase to their quarterly dividend.  The previous payment was $0.49 and the new payment is $0.50.  That's a pretty small 2.04% raise, but it's still a raise.  The increase marks the 43rd consecutive year of increases putting them well onto the Dividend Champions list.  The current yield on Wal-Mart shares stands at 3.12%.

I own 63.415 shares of Wal-Mart in my FI Portfolio so this dividend increase grew my forward 12-month dividends by $2.54.  This is the 3rd dividend increase I've received from Wal-Mart since initiating a position in June 2013.  Cumulatively my income has increased by 6.38%.  That's nothing spectacular, but it's still beating inflation which according to USInflationCalculator sits at 1.7% for 2013 through 2015. 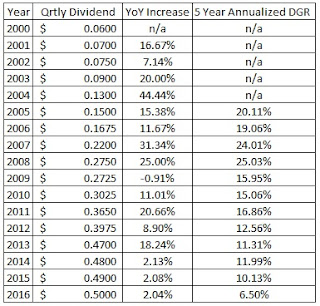 Wal-Mart was once a dividend growth all-star with double digit increases being the norm.  However, the last three increases haven't been anywhere close to what investors were used to with just 2.0% raises each year.  Slower dividend growth should have been expected though considering that the payout ratio had increased during the rapid growth phase and most importantly due to Wal-Mart's struggles to grow the underlying business.

Wal-Mart is in the middle of a turnaround to improve shopper satisfaction and try to increase their online presence to boost sales.  It's a multi-year plan so I wouldn't expect dividend growth in 2018 to be much more than the recent past either barring a quicker turnaround than forecast.  There was some encouraging news from their 4Q earnings release with revenue increasing 2.2% on a constant currency basis, comp sales improving 0.6%, increased e-commerce sales of 8% on a constant currency basis as well as an increase in traffic to their stores.  Overall the quarter wasn't impressive, but Wal-Mart is in the early stages of their turnaround project so time will tell how well they do.

My forward dividends increased by $2.54 with me doing nothing.  That's right, absolutely nothing to contribute to their operations well other than shop at their stores.  Based on my portfolio's current yield of 3.24% this raise is like I invested an extra $78 in capital.  Except that I didn't!  One of the companies I own just decided to send more of the profits my way.  That's how you can eventually reach the crossover point where your dividends received exceed your expenses.  That's DIVIDEND GROWTH INVESTING AT WORK!  That's the beauty of the dividend growth investing strategy because you build up your dividends through fresh capital investment as well dividend increases from the companies you own.

February looks to be a solid month for dividend increases with 4 already announced and 2 more expected.

Do you own shares of T. Rowe Price?  Should management have given shareholders a bit more of a raise or hold onto cash in case things get worse?