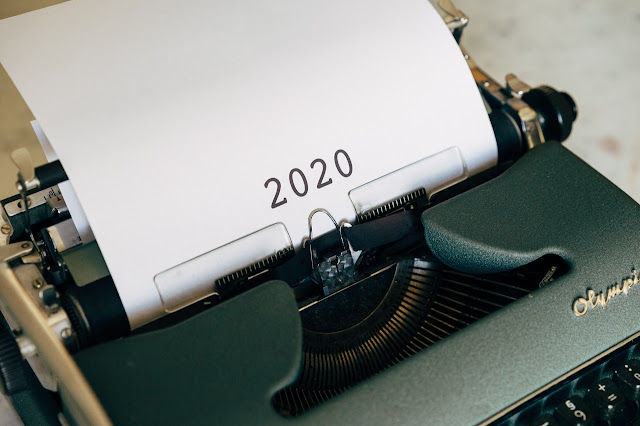 It's amazing to me that later this year will mark a decade of investing in individual stocks.  The time has certainly flown by.  When I think back to just how much has changed over that time it's absolutely mind boggling.

Back in 2011 we were engaged, no children, and renting our residence.  Fast forward to today and 2021 will mark 9 years of marriage.  We purchased a house way back in 2013 and are now looking at potentially purchasing some land and building our own house.  We welcomed our first child, Lucas, into this world in 2014 and even though he passed away after a hard fought fight against congenital diaphragmatic hernia he never went without love and there's not a day that goes by that I don't miss him dearly.  We've since welcomed 2 crazy girls into the mix that are nearly 5 and 2, both going on 15 based on their attitudes, and there's another one on the way that we'll be meeting in March or April.

Needless to say it's been a busy and wild almost decade and that's without even touching on the financial aspects.

Overall I can't complain too much about how the last 9 years have played out and now seemed like a great time to truly sit back and reflect on how the investments and portfolio as a whole have been.  I've made plenty of mistakes along the way and there's plenty more to make as well.

While the 10,000-foot view numbers are solid and nothing to really fret about, I wanted to take a look at my performance with my main brokerage account as well as examine the performance of my individual holdings.

When constructing the FI Portfolio I haven't put too much thought into the sector allocation.  One reason for that is that I'm not that worried about it especially as my portfolio has grown.  I'd rather focus on finding companies that I believe are trading at attractive valuations and with good dividend growth prospects.  I know I'm not going to be 50% allocated into any sector because there's high quality businesses to be found in just about every sector and the portfolio is sizable enough now to really preclude me from doing so.

Another reason I don't worry about the sector that much is because there's a lot of cross-breeding between sectors for some companies.  For example should Visa be in technology, financials or consumer discretionary?  Same thing with the various REITs that I own should they fall under Real Estate or the primary sector, health care, consumer discretionary, or technology, that they or their clients operate in? 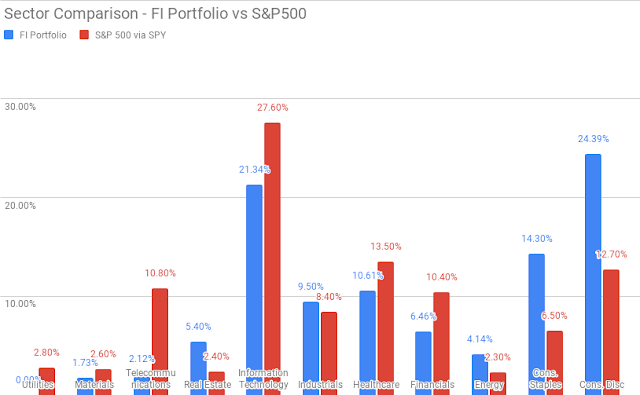 Obviously my sector allocation varies from that of the S&P 500.  The biggest deviations to the downside are telecommunications, technology and health care.  The largest deviations to the upside are real estate, consumer staples and consumer discretionary.
The one sector that is noticeably absent from my holdings, especially as a dividend growth investor, is utilities.  I like the utilities sector in general but I think there's better uses for my investment capital considering I'm still relatively young.

Let's dig into the returns which is the real subject of this article.  The way I've calculated the returns is using the XIRR function in Excel along with every cash inflow and outflow within my portfolio and the ending balance at EOY 2020.  My very first cash inflow to my portfolio was made back in August 2011 so I'm coming up on 10 years of investing in individual holdings.

In order to compare against some benchmark I used the S&P 500 Total Return index and simulated an investment in that index with the corresponding dates as the cash inflows into my FI Portfolio.  The SP500TR investment would have resulted in a 14.7% IRR.

A big reason for the S&P 500 TR outperformance can be attributed to some of the really big winners of the last decade, such as Apple, Amazon, Facebook and Google that I've had effectively zero exposure to.  I did initiate positions in Amazon and Google during 2020 but the amount of capital invested and the time horizon are too small/short to draw any real conclusions.

That's likely the biggest reason for the S&P 500 TR outperformance, but other contributing factors would be (1) the S&P 500 TR IRR assumes cash was 100% invested the day it was transferred into the account, and (2) up until February 2017 I paid $7.95 commissions, then paid $4.95 commissions through October 2019 and have paid $0 commissions since.

Another contributing factor would probably be my overweight exposure to energy, namely the oil & gas sector, that was hit especially hard in 2020 and has done nothing over the last decade. 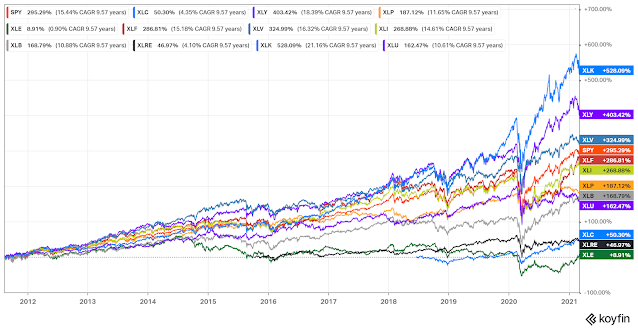 It's a bit disappointing to see those results for my FI Portfolio versus the S&P 500 TR, but I'm not that discouraged.

While the overall portfolio performance leaves a lot to be desired, the individual positions do offer some promise.

Here's how the results look through the end of 2020 across the holdings where the first purchase was made at least 5 years ago. 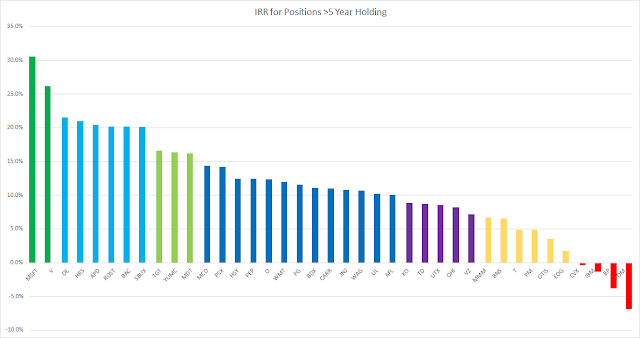 Unfortunately 11 of those positions are kind of in no-man's land having generated between 0-10% IRR's and I think those warrant further examination to determine whether they should remain in the portfolio.

The remaining 4 holdings have had negative IRR's since I first invested in them each with the first investment coming ~7.5 years ago and have been big drags on the portfolio performance.  The big loser is Exxon that's shown a -6.9% IRR across 7.6 years.

The distribution of IRR versus years invested has been fairly evenly dispersed with plenty of solid winners across all time frames with plenty of duds across the periods as well.

One of the big reasons that I've underperformed versus the S&P 500 is likely due to my over-diversification and lack of capital oomph behind some of my investments.  The capital weighted IRR of positions that saw their first investment 5+ years ago is an adequate 10.8%. 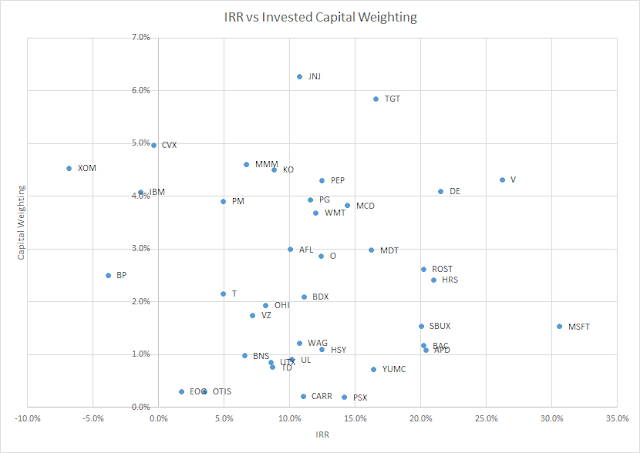 My investment in Microsoft was clearly a good decision.  However, the amount of capital behind that position just wasn't enough at just 1.5% of the capital that's been invested in the positions with greater than 5 year horizons.

Especially when you contrast that with some of the higher capital investment positions like Chevron, Exxon and IBM.  Those 3 positions represent 13.6% of the capital that's been invested in positions that are at least 5 years old and all three have been big duds.

The capital weighted IRR excluding those 3 positions is a much more attractive 13.0%.

There's probably some resulting at play in that analysis, but it fits with my desire to get more concentrated moving forward.

Going forward I would like to get to a more concentrated portfolio, but will likely still stay in the 30-40 holdings range.  I'm all for diversification, but the current 60+ position count is overkill.  That's priority number one for 2021 and beyond.

I've closed one position thus far in 2021 and expect to continue cutting down on the number of holdings.

Something that's contributed to that overdiversification is the fact that I've been hesitant to average up my cost basis when the opportunity presents itself.  Anchoring bias is a really tough beast for me to overcome.  I've worked on that and have done better over time, but there's still plenty of room for improvement.

In all honesty the way things typically worked was that I didn't really take portfolio construction into account.  Too often what would happen is I would begin to buy shares and not long after the share price was some 10-20% higher which made it difficult to continue adding.  I'd then move on to look for better opportunities, but would fail to circle back to previous ideas.

A more focused approach would clearly be better.  The way I currently envision that is before adding to any position or considering a new position it needs to be weighed against the opportunity cost of my existing holdings.

Another thing that's been a drag on performance and that I need to commit to is re-examining my holdings, especially those that have middling returns.  I don't want to go crazy with that, but I do think re-visiting to make sure the initial thesis remains intact would serve me well going forward as well as following through with cutting the losers from my portfolio.  That's honestly been one of the harder things for me to do.

Overall I'm pretty pleased with the results considering that I've been learning as I go.  Realistically I've probably been a bit too focused on dividends when I should be looking more at future expected dividend growth.  And of course that over-diversification didn't help.

Although I do have to say there hasn't been one time where I've been scared and felt the need to close my positions which reinforces the need for quality holdings.

My FI Portfolio has done well for me even though it has underperformed the S&P 500 TR.  Such is life I guess.  While an 11.4% IRR has clearly trailed the S&P 500 if I happen to repeat that across the next decade I'll be ecstatic as that would see my FI Portfolio grow 2.9x.

Have you ever examined your performance versus a benchmark?  How do you approach portfolio construction and what is your ideal number of holdings?