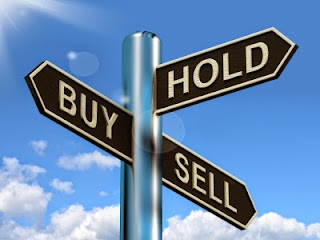 On Monday of last week I made the decision to close out my position in Kinder Morgan (KMI).  I was very late to the party on this one and the returns definitely show it.  I have plans to repurchase shares of KMI after the wash sale period ends in late January.

I don't take selling shares lightly.  In fact I have over 130 recent buy articles and this is just my 7th recent sell post.  So selling is something that I don't normally do.  However, there was big news from KMI earlier this month with a 75% dividend cut and that made me rethink my position.  I mention in my introduction that one of the reasons I like to write about my purchases is because I have a record of my investment thesis and can look back to see what I missed to hopefully learn from it and avoid the same mistake in the future.  I find the sale posts are often more enlightening for my own purposes.

I'll detail the transactions and returns first and then discuss my reasoning afterwards.

Kinder Morgan was one of the earlier purchases for my FI Portfolio.  I initiated a position in October 2012 with a purchase of 55 shares.  I then added 36 more shares later that month, 34 more shares in November 2012, 40 shares in December 2012, and 45 shares in March 2014.  There were also 6 dividends reinvested along the way that added another 8.453 shares.  The rest of the dividends were received in cash.  In total I owned 218.453 shares of Kinder Morgan.

The following table highlights the cash flows for my investment in Kinder Morgan. 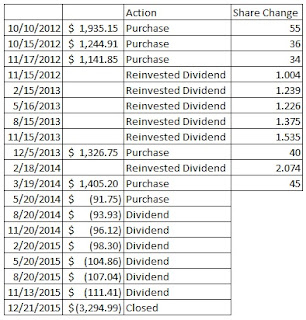 Kinder Morgan was one of my oldest holdings so it hurts a bit to get rid of them from my portfolio.  However, the situation has completely changed with Kinder Morgan after the 75% dividend cut.  Originally my plan was to just hold the shares that I owned because the damage had already been done via share price depreciation but that has since changed.  The combination of end of year tax planning, a huge loss from KMI, the dividend cut, and uncertain future led me to move ahead and cut my losses.

I stopped adding to my Kinder Morgan position back in early 2014.  At the time it was my largest dividend payer and still was up until the dividend cut announcement.  In term of portfolio security it didn't make sense to add anymore to KMI even though there were ample opportunities to add at what appeared to be good valuations.

About a year ago, I had begun getting concerned about KMI and whether the dividend truly was safe.  However, with everything else going on in my life losing $400 in dividends just wasn't a high priority.  I failed to do research and truly dig into the numbers and just took managements' word as gospel.  So there's no one to blame but myself.

Kinder Morgan had much more exposure to commodity prices than I expected and that was something that I missed in my original research on the company.

What really bothers me though is that Richard Kinder continued to reiterate the plan to grow dividends by 6-10%.  So one month earlier we get news that KMI should continue to increase dividends 6-10%, sure that's lower than the 10%+ forecast but it's okay because the yield is solid and everything oil is crazy right now, so it was acceptable.  Then we get news of a 75% dividend cut.

For the health of the company the cut was the right move.  KMI has stretched it's balance sheet and was working it's way through yet another acquisition.  The acquisition announcement should have been the writing on the wall for the priority of cash.  While the acquisition model isn't necessarily bad, a big problem comes when you have to access the capital markets.  Kinder Morgan routinely raises capital through selling shares or taking on more debt.  That's fine when the stock market is pricing your shares reasonably but after the sharp decline throughout the last couple months it made no sense to sell additional shares.  Credit markets were also just about frozen out.  For companies that rely on the capital markets the credit rating should be the number one priority and it clearly won out here.  Going from investment grade to a non-investment grade credit rating would have severely increased the cost of capital.

I would consider adding KMI back into my portfolio in the future; however, I need to see how things play out for the company in the meantime.  Management said part of the reason for the dividend cut was to self-fund it's capital expenditures.  I want to see what that looks like in practice as opposed to theory because the dividend was supposed to continue growing 6-10% and that's no longer the case.

I believe the assets that KMI has are vital and top notch and will still have a large demand over the next 10-20 years.  However, after the dividend cut I'm not taking management's word for anything and am firmly in show me mode.

If you owned Kinder Morgan did you sell or are you holding on?  Have you made any sales to clean up your portfolio or for tax loss harvesting?